Indonesia gears up for infrastructure dialogue with Africa

Indonesia’s foreign affairs minister Retno Marsudi said the dialogue which will start on August 20 aims at encouraging infrastructure cooperation between her country and Africa.

Indonesia’s foreign affairs minister Retno Marsudi said the dialogue which will start on August 20 aims at encouraging infrastructure cooperation between her country and Africa.

JAKARTA - Indonesia is gearing up to host a two-day infrastructure dialogue in August with 53 African countries, including Uganda.

Indonesia's foreign affairs minister Retno Marsudi said the dialogue which will start on August 20 aims at encouraging infrastructure cooperation between her country and Africa.

"This dialogue, in turn will provide a multiplier effect on the economy of both Indonesia and African countries," she said recently at a joint breakfast meeting with 14 journalists from Africa and Pacific countries in Indonesia's capital, Jakarta.

Indonesia's government officials led by foreign affairs minister Retno Marsudi (in specs) pose for a photo with journalists from Africa and the Pacific after the breakfast meeting recently at Hotel Borobudur in Jakarta, Indonesia. Photos by Umaru Kashaka

The journalists from Uganda, Ivory Coast, Senegal, Madagascar, Mozambique, Fiji, Kiribati, Nauru, Solomon Islands, Tuvalu, Vanuatu and Papua New Guinea are on a week's familiarization trip aimed at promoting economic, social and cultural aspects of Indonesia to the greater audience in the world.

She said around 700 participants from 53 African countries and Indonesia are expected to take part in the dialogue.

"It is expected that there will be a signing of business deals in infrastructure and derivatives as well as other cooperation between Indonesia and African countries," the minister said. 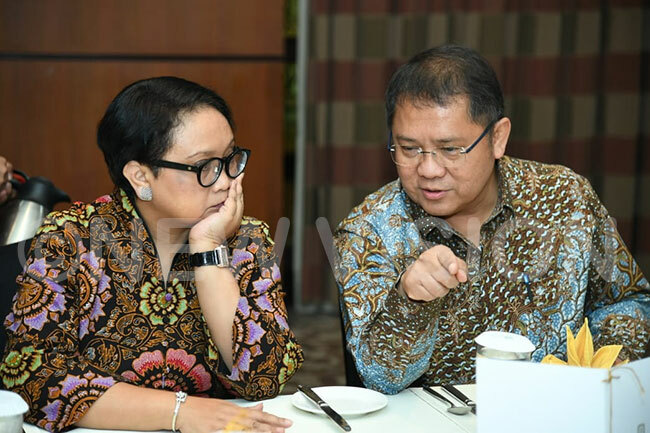 She also said in the midst of global economic uncertainty and slowdown, Indonesia continues to commit itself to open markets and inclusive economic relationships.

This, she said, is by sustaining economic ties with traditional trading partners and strengthening economic links with countries in Africa and the Pacific.

"Indonesia's economic ties with African countries are growing closer and stronger. For Indonesia, Africa is a non-traditional market full of potentials. For Africa, Indonesia is a large and emerging market in the heart of Southeast Asia," Retno said.

Retno noted that the world today is full of uncertainties.

"Conflicts and wars continue in many countries; we are witnessing instability in many regions; radicalism, terrorism, irregular migration; weakening of global economy; trade war to the rise of hoax and fake news," she said.

Given the enormous amount of changes and the fact that no country can face them alone, Retno said global cooperation becomes vital, including with the media.

"Indonesia's foreign policy is consistent in this manner. Our track record speaks volumes. Indonesia has and will continue to pursue its role as part of the solution and not the problem," she stated.

The minister stressed that Indonesia's endeavour to continuously contribute to world peace and security is embedded in their Constitution.

"Indonesia always puts forward cooperation and a "habit of dialogue", she said. 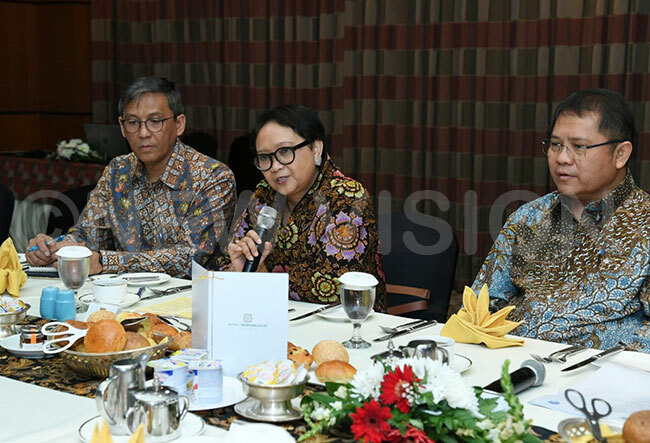 Retno hoped that the 14 journalists will experience the real Indonesia—its people, culture, sights and sounds—and their views of the world.

"Journalists give us all, especially those that have not had the opportunity to see Indonesia first hand to know the facts about our country. Now it is about you to spread the word about Indonesia," she told reporters.

Her Communication and Information Technology (ICT) counterpart Bapak Rudiantara said he trusts this journalists' visit will be valuable for them as they immerse themselves in and experience all things in Indonesia.

"It will allow you all to know Indonesia better and take this knowledge home and share it with your respective communities," he said.

The journalists' visit which began July 8 and will end on July 14, also provides a journalistic training and discussion forum for the participants to get better understanding of journalism.

Cheptegei optimistic ahead of tonight's 10,000m race in Valencia