Why agriculture is key
Next Story

Nimiriano, the Editor-in-Chief of Juba Monitor, one of South Sudan’s popular English language newspapers, has scaled the ladders of women in leadership to feature among the top 10 leaders in the world.

Nimiriano, the Editor-in-Chief of Juba Monitor, one of South Sudan’s popular English language newspapers, has scaled the ladders of women in leadership to feature among the top 10 leaders in the world.

She is the only female newspaper editor in a country where dozens of journalists have been killed in the line of duty. Many times, she has come face to face with intimidation and threats to her life.

She has fought a long battle to raise the voice of female journalists in South Sudan, a country which has been a hotspot of conflict since it gained independence in July 2011.

For her resilience, Anna Nimiriano Nunu Siya has scaled the ladders of women in leadership to feature among the top 10 greatest leaders in the world. Nimiriano is ranked 8th on 50 World's Greatest Leaders for 2019 by Fortune Magazine.

Namiriano, the Editor-in-Chief of Juba Monitor, one of South Sudan's popular English language newspapers, is also the winner of the Women in News Editorial Leadership Award 2019 Africa. The award was announced in April. Women in News is a programme run by the World Association of Newspapers and News Publishers (WAN-IFRA).

The programme empowers women in media leadership and advocates the voice of women in news to be allocated the desired space. For those who know Nimiriano, her win was not a surprise.

In 2016, as war raged on in South Sudan, Nimiriano and another female journalist, Irene Ayaa, stormed a prison in Juba, to demand the release of the then Juba Monitor Editor-in-Chief and founder the late Alfred Taban. Taban was in jail because of an editorial he wrote, calling for a rethink of leadership in South Sudan.

He was confined without access to medical care, yet he was diabetic. Nimiriano and Ayaa wanted to ensure that Taban had his medication, but ended up successfully negotiating for his release.

In a tweet shortly after the announcement of Nimiriano as a WAN-IFRA winner, Ryan Brown, the Johannesburg Bureau Chief for The Christian Science Monitor, said South Sudan's journalists are brave and big-hearted people working under difficult circumstances to tell important stories, adding that Nimiriano, the country's only female newspaper editor, is no exception.

Colleagues say Nimiriano is a jolly and serious woman who takes life at her pace. She is not in a hurry, but she is a serious journalist and editor. Vision Group Editor-in-Chief Barbara Kaija, who is also the 2018 winner of the award from sub-Sahara Africa, described Nimiriano as a true reflection of resilience and one who has love for her job, even under very difficult circumstances. "I have met Nimiriano three times.

We always talk about how it is a dangerous job to work in South Sudan as a journalist," Kaija says. She recalls one particular incident when Nimiriano got into trouble for writing about garbage in Juba because somebody thought that it was painting a bad image of the country, yet the garbage was there for anybody to see.

In an interview with Sally Armstrong, a Canadian journalist, Nimiriano recalled the harrowing meeting with the mayor of Juba and his henchmen, a meeting that included accusations and threats.

She confronted the mayor with the facts, offering to go with him to the site in question so that he could see the heaped-up garbage and assess the health risk himself, as well as question the residents about who was asking them for money.

Eventually, the issue was resolved. Overcoming trials of a female journalist Documented reports show that female journalists are facing a "relentless" barrage of attacks and harassment, with nearly a third considering quitting the profession as a result.

A survey by the International Women's Media Foundation (IWMF) and TrollBusters, which supports harassed reporters, found that more than half of the women in the media have suffered work-related abuse, threats or physical attacks in 2017. These are challenges that Nimiriano has faced throughout her career. "I pay the price for my work in journalism.

People have called me a crazy woman for risking my life to save a colleague, but I was a witness to his arrest and I needed to stand up for him," Nimiriano said of her work while receiving the award in Glasgow, Scotland, last month. In an interview with New Vision, she said winning the award was an honour not only for her, but also for her country.

"I dedicate the award to journalists in Africa, especially the female journalists. I would like to tell them that journalism requires hard work, speaking the truth and being determined.

The challenges we face in the line of duty are part of our work. Take it on courageously," she said during a phone interview with New Vision. Nimiriano added: "Face the challenges, but do not surrender, ours is to fi nd solutions to the numerous challenges that our people face. 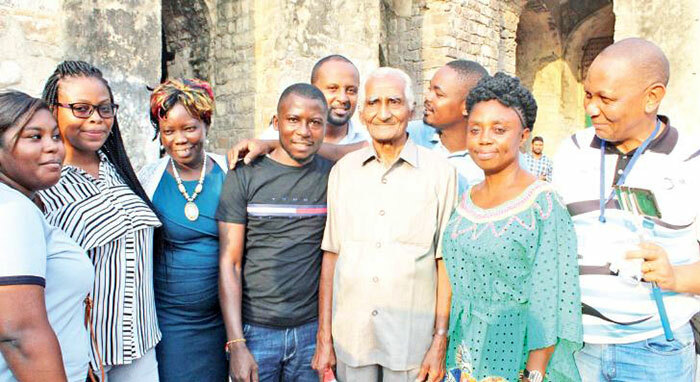 There are threats, no safety, only God protects us." Referring to the award, Nimiriano said though recognition of one's work may not come quickly, "at one time, your hard work amid all the challenges will be celebrated". Kaija echoed Nimiriano's call and urged female journalists to aim higher.

"It does not have to be just for this award. It could be something different — even better — but even if you do not get an award, serving your community and your people and being true to journalism, is itself, satisfying," Kaija added. She explained that as a journalist, when one writes a story about a need in a community and it is met, or somebody comes up to sort it out, that, in itself, is satisfying.

"When you expose something that has gone wrong in a society, for example people's drugs being stolen and then action is taken, that, in itself, is a big contribution." What next for Nimiriano? Winning the Women in News Editorial Leadership Award comes with a lot of responsibility. It means one can do more to lift fellow women in the profession.

"It means you can do a little more, to lift the other journalists as well. I do not know how much Nimiriano will be able to do in her situation, but even just being there alone and us talking about her and saying well done, Nimiriano, is a good thing. "It shows that there is a woman who is surmounting diffi culties to achieve, and it means that others can do it," Kaija states.

Recently on a trip to India, New Vision journalist Geoffrey Mutegeki met Nimiriano. "She was interactive and inquisitive. She asked me about the media in Uganda and how women were doing. Nimiriano also asked me about the newspaper industry," Mutegeki says of their encounter.

"She loves her job because of all those who travelled to India, it was only Nimiriano who carried her product. She had copies of the Juba Monitor, which she distributed to everyone, "saying this is what we do". "However, from the conversation we had, I realised the government has a lot of influence on them. Sometimes, they have to withdraw stories from print, it is a bumpy journey, but she seemed to be managing," Mutegeki adds.

She is the first female Editor-in-Chief of Juba Monitor. She was appointed to the position in 2017, when Taban sought to become a member of the South Sudan National Dialogue and accepted nomination into Parliament to represent Kejokeji.

She has hair-raising stories about her job and career journey. She escaped rape and has been in prison because of her work. For Nimiriano, it all started when she was young. She says her elder sister used to tell her how she was good at narrating to their parents any incident that could have happened in their absence.

Also, after joining intermediate school, Nimiriano developed more interest in the school's weekly review, where every pupil was encouraged to report events that happened in their area over the weekend. The stories would be displayed on the noticeboard for the pupils to read.

She was active in giving her story reviews. In secondary school, she developed more interest in photography. Her uncle bought her a camera to pursue her passion. At university, Nimiriano developed her journalism career and after completing her studies, she joined Khartoum Monitor which was renamed Juba Monitor.

Taban, was interested in Nimiriano's writings and asked her to join the newspaper in 2006. Since then, she has not looked back.

Record-breaking 2014 was hottest in modern history