The process which is being done by five teams of the army task force is taking place in different centres across the country.

The process which is being done by five teams of the army task force is taking place in different centres across the country.

The verification of an estimated 50,000 army veterans who have not yet received their pensions and gratuity has started.
The process which is being done by five teams of the army task force is taking place in different centres across the country.
The teams include East-West Buganda, Busoga-Bukedi, Kigezi-Ankole, Acholi-Lango and Teso-Karamoja. These teams will move in all districts per region, spending two to three days in each district depending on the number of files.
Maj. Bilal Yusuf Katamba, the first division spokesperson of the army, said that they have already informed all the veterans in the country about the exercise through their district structures and the media. 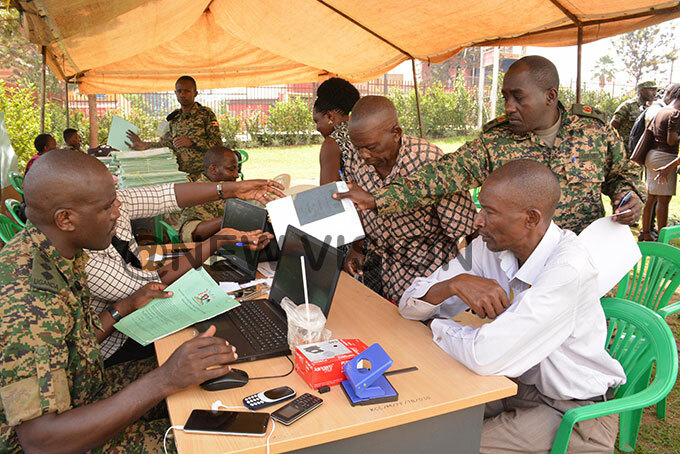 Former Uganda people's Defence Forces soldiers registering during the verification exercise for the payment of veterans. (Photo by Timothy Murungi)

"We are targeting all soldiers including those who served in the former governments but never received their pensions and gratuity," he said.
The process is which started today will end on August 5, 2019. Those coming for verification are expected to carry their discharge certificates, National Identity Cards and their current bank statements.
In case of death, the heir or administrator of the estate of the deceased is expected to carry on top of the above, their IDs, death certificate and family minutes taken when being named heir or the administrator of the estate.
Maj. Mohammed Katumba Tamale, a representative from the army police, said that this is aimed at weeding out fraudsters.
He said the pension process has been frustrated by fraudsters who forge documents and claim for the payments.
He said the verification taskforce has investigators and intelligence officers who are stationed to detect fraud.
Ruth Kabarungi, a widow to one of the veterans was among the first to reach the verification centre stationed at Kampala Capital City Authority grounds in Makindye Division. This centre serves all the five divisions of Kampala.
She said the process comes at a time where fraudsters are frustrating them from pursuing their husbands' pensions. Her deceased husband, whom she declined to name, is among those who fought in Luwero.
"This people have greatly helped me. Though I have some missing documents, at least I know where to start from tomorrow," she said, noting that she started the process of getting pensions in 2015 but instead lost money through bureaucracy in government offices.
She said once the money is released, she will buy land and build a house for her three children who dropped out of school before completing advanced secondary education.
50 year old, Paul Kasibante, said' "Today I am the happiest. I have suffered chasing after this money. The bureaucracy in Public Service had made the whole process impossible for me".
He said he has spent a fortune moving back and forth from Kibaale to Kampala, following up on his issue.
Tamale said that payments are likely to be made two months after the verification process.