Home
NEWS
Media
Supplements
Tenders
Notices
The residents were given cassava cuttings and potato vines to plant before the end of the rainy season.

The residents were given cassava cuttings and potato vines to plant before the end of the rainy season.

Buyende RDC Richard Ogwang and Emukule preparing to hand over the items. Photos by Geoffrey Namukoye

Victims of a storm that ravaged Buyende district in April have received relief items. The storm killed 15 people and left many homeless.

At an event organised by Buyende district local government and Plan International on Friday at Kidera sub-county, residents were given cassava cuttings and potato vines to plant before the end of the rainy season. The affected households were also given maize grains and beans.

During the handover, Patrick Emukule, the programme unit manager for Plan International called on recipients to embrace sustainable agriculture if they are to nip food insecurity in the bud.

"Disaster deprived the people of their basic needs, I believe sustainable agriculture is the solution to avoid dependency," Emukule said. 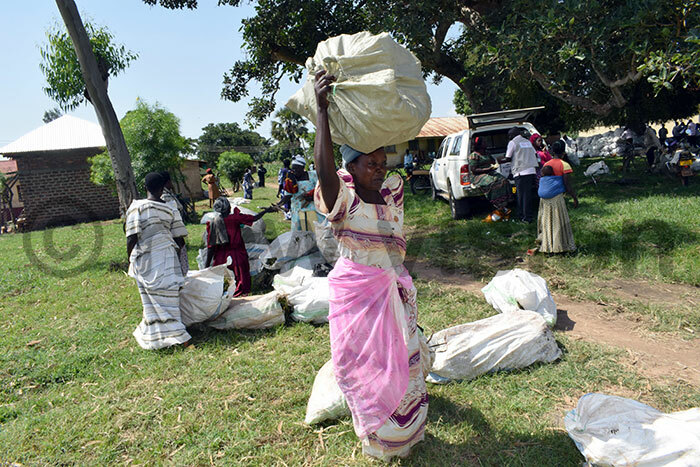 "Women form a pillar on which community thrives, they, therefore, need more support to continue playing a pivotal role in the development of communities," Kadogo said.

Meanwhile, some residents complained about the Government's delay to honour the promise of donating iron sheets and more food to the affected households.

Leo Isabirye, 75, said his grandchildren have since shifted to Kamuli because he cannot feed them.

"My grandchildren now stay with their relatives as I wait for my maize to mature,"  Isabirye said.

William Kiiza, the Kidera sub-county chairperson, revealed that another storm recently hit Itamya and Kabugudho aggravating the already dire station. He called on more well-wishers to offer support to the residents.