Entebbe to get public-free port zone

The free port zone is estimated to create about 200 direct jobs upon completion.

The free port zone is estimated to create about 200 direct jobs upon completion.

Lt Gen. Mugira and Jabo after signing the memorandum at NEC offices in Bugolobi, Kampala

The memorandum was signed by UFZA executive director Richard Jabo and the managing director of NEC, Lt Gen. James Mugira, at NEC offices in Bugolobi, Kampala.

UFZA acquired five acres of land from Civil Aviation Authority (CAA) for development of free port facilities in 2018. This is part of the master plan for the rehabilitation and expansion of Entebbe Airport.

The free port zone is estimated to create about 200 direct jobs upon completion. The target sectors include food processing (fish, beef and dairy); horticulture (flowers, fruits and vegetables); logistics (cold storage, warehousing and transshipment) and mineral processing, among others. 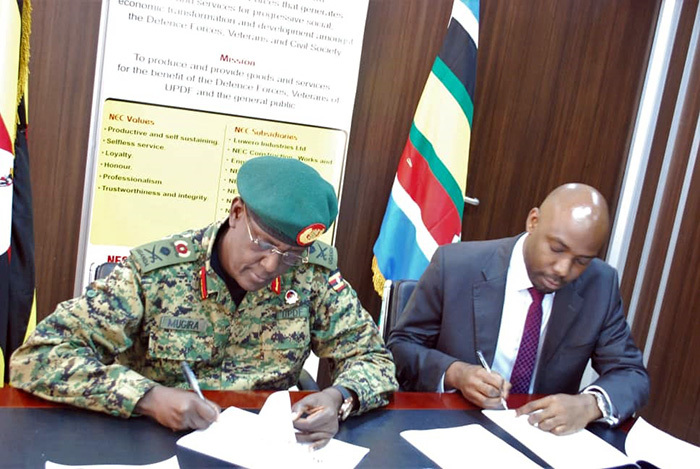 Free zones are customs-controlled areas where goods introduced into the designated area are generally regarded so far as import duties are concerned as being outside the customs territory. The free zones are schemes set up by the government to boost export-oriented investment.

NEC, on the other hand, was established in 1989 by an Act of Parliament to serve as a commercial arm of the defence ministry and to produce goods and services that are beneficial to the defence forces and the general public.

Its commercial ventures are undertaken through its subsidiaries and joint ventures. NEC has handled construction and engineering works of the defence forces, government departments and agencies, such as agriculture ministry, Kiira Motors Corporation, among others under similar arrangements.

In pictures: Motocross Championship at Garuga