Ugandans in the diaspora told to unite
Next Story

The groundnut market price is between sh6,000-sh8,000 per kilogram.

The future is in groundnuts that are resistant to pests and can with stand climate change. (Photo by Titus Kakembo )

The groundnut market price is between sh6,000-sh8,000 per kilogram.

AGRIBUSINESS
Following economic recovery and the death of smuggling essential goods as a means of income, groundnuts are changing lives of peasants in Tororo following the intervention of aBi, Tororo District Farm Association (TODIFA) in alliance with the Ministry of Agriculture to introduce better farming methods, new varieties that are resistant to pests and can contain the negative effects of climate change.
A recent visit to the Cooperative College in Tororo revealed demonstration gardens used for improving farming and postharvest methods in place.
"The new species have increased the volume of groundnuts harvested after the farmers adopted the line way of spacing and planting,"  said an official,  Lawrence Emojong.  "This has, in turn, boosted the incomes and availability of food in the homes in 12 sub-counties here."
The groundnut market price is between sh6,000-sh8,000 per kilogram. There are more than 12 varieties available in the demonstration gardens to benefit farmers
"It is practically evident that the Red Beauty species that was introduced in Uganda in the 1960s has been challenged by pests and climate change," explained Emojong. "Besides that, we encourage farmers to use tarpaulins to dry the crop and shun the traditional method of doing it on the bare ground if they are to get value for their product." 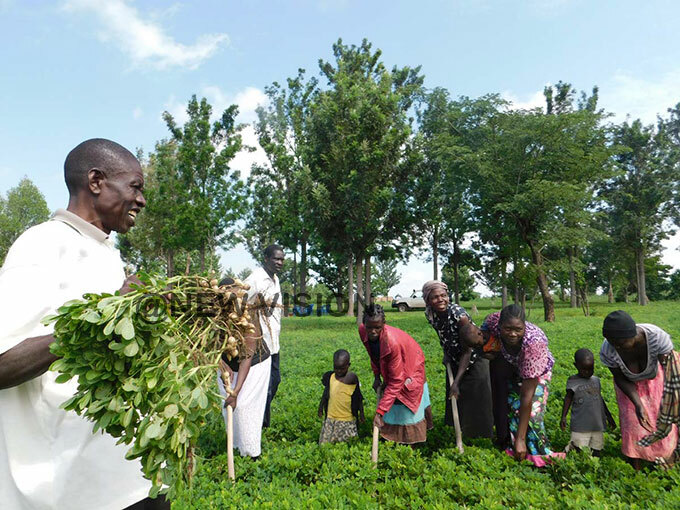 There is hope in groundnut species that are resistant to pests. (Photo by Titus Kakembo )

Through these interventions is the success story of one Ochieng Steven a resident in Opeta village who has turned out to be a model farmer in the community.
"I now know how to space the seedlings while planting, spray and apply better post-harvest handling on this farm sitting on seven acres of land.
I have joined a group of farmers who share the market trends in price and preference," says Ochieng. "We are guided by the Cooperative College staff about what to do and how to do it. This has improved our incomes, food availability and access to required farm inputs."
Ochieg has since bought seven cows and is now building a permanent house to accommodate the family. It will replace the grass thatched one that is in existence. His garden has crops that have braved the long drought and pests in the area.
"I have been able to take my children to school and avail them the academic requirements," says Ochieng.
Another benefactor David Okware in Podut Village beams with smiles of satisfaction talking about his groundnut farming experience.
"The groundnut market is there and the price of sh6000-sh8000 makes economic sense," says Okware. "I have to dry the groundnuts on tarpaulin if I am to get the highest price. I plant rice and have bought cows to diversify the source of income. That is the way I can support my seven children."
To Okware food and household income are no longer a problem and he is able to sustain his family with food and economically.
"Our dream is to educate our children to the highest standards of education, build a permanent house and leave them something to inherit," says Mrs. Cana Nyappendi.

Supply of pineapples expected to increase