On the second day, nearly 30km chalked off from the 467km journey.

On the second day, nearly 30km chalked off from the 467km journey.

"Hey guys, Namugongo is that way!" a man standing at the entrance of a kiosk a few feet away from the highway chokes on the thick plumes of smoke billowing out of the rickety structure as he points in the direction we have our backs on.

"Yes, we know, thank you. But we are heading to Karamoja," I offer.

He does not seem convinced at all. It is easy to read the doubt cast across his sweaty face. So I briefly abandon the walk and saunter over to him to do a bit of explaining. He appreciates the effort and reciprocates the gesture by giving me audience.

"We are walking to Karamoja from Kampala. We want to raise awareness about the plight of street-connected children and raise funds to help them get into school. Children should not be on the street. They should be in school. Right?"

"Yes, you are right. Now I understand. You people are doing something good. At first, I thought you were going to Namugongo but heading the wrong way," he says. As I walk back to rejoin the team, who are now about two hundred metres ahead along the bustling Mukono-Kampala highway, I grin with some measure of satisfaction that I have successfully spread the Journey of Hope #SchoolsNotStreets campaign message to yet another person. So that's part of how the second leg of the 467km awareness and charity walk from Kampala to Karamoja went.

But first, a bit of how Day One was like on the road after the flagging off  at Parliament . . .

On Monday, a large group of walkers, including Government officials, civil society actors, schools and a security apparatus to aid the flow of traffic, were flagged off from Parliament destined for Mandela National Stadium, Namboole for the opening leg of the Journey of Hope walk.

Dwelling Places founders William and Rita Nkemba led the way, holding the Uganda and Journey of Hope flags, respectively, and flanked by Stella Ayo-Odongo, who is the executive director of the Uganda Child Rights NGO Network (UCRNN). 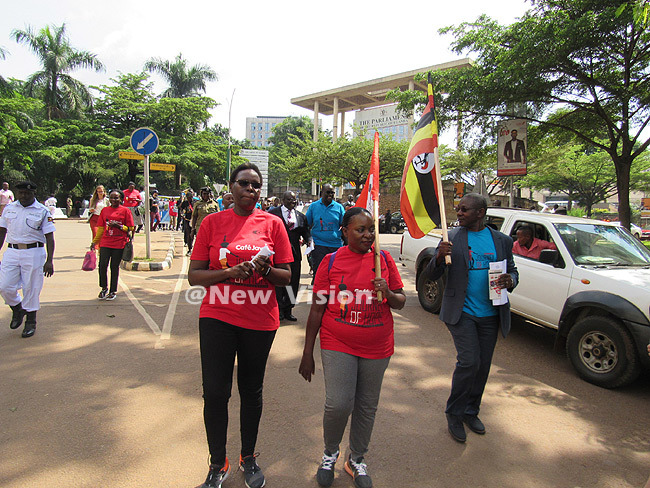 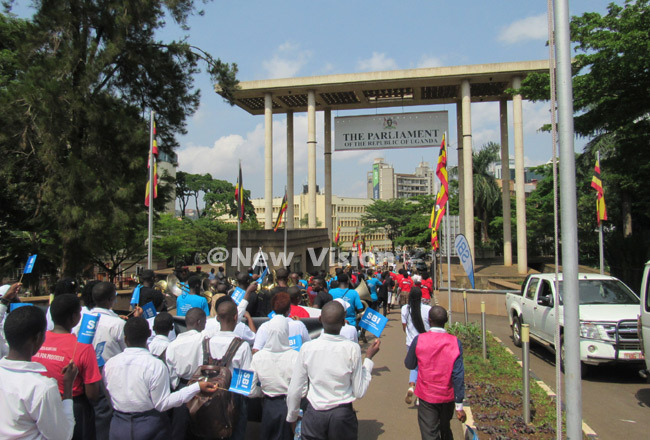 The immediate destination of the large group was Namboole Stadium. It was a sobering 10km walk from the heart of the city to the national stadium: banners emblazoned with messages of support for children's rights and the need to get them off the street and into school, as well as cause the end to child trafficking were a conspicuous feature during the trip.

Exhausted, refreshments served to the large group at Namboole were a source of relief. But those who walked felt it was worthwhile.

At the stadium, it was then time for the core group of walkers to take it from there. First destination: Mukono. 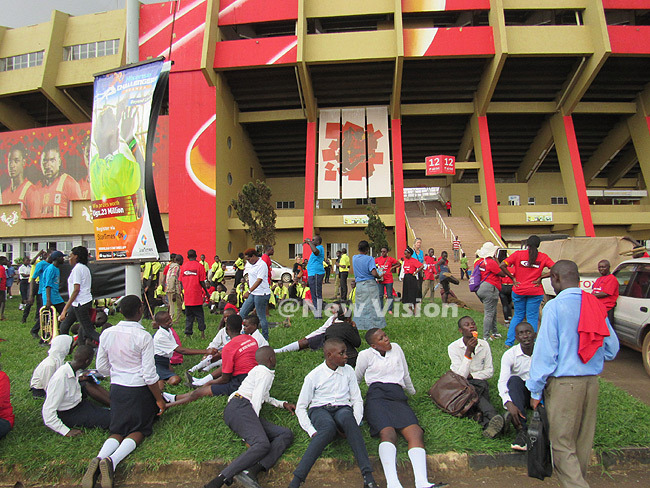 Hundreds had been reduced to only a handful. And among this pruned lot were German students Linda Uhlig (holding Ugandan flag) and Tamara Walz. Both are regular walkers and they said they will complete the entire 467km on foot. 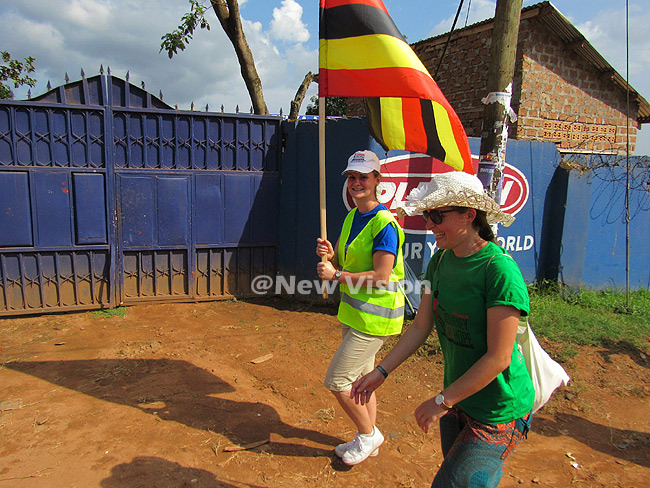 The first pitstop was Mukono in central Uganda. One small step towards the end goal, but a GIANT leap for the day. 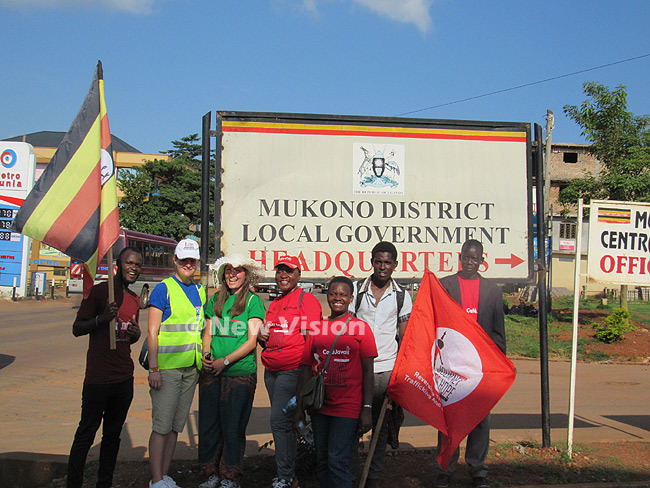 After hours of working those metatarsal bones, a dip in a basin of cool water was welcoming relief for the walkers.

This year, the Journey of Hope Awareness and Charity Walk is looking to raise funds for the construction of a secondary school in Lomaratoit village in Napak district, Karamoja sub-region.

Supporting the walking team is a larger team in charge of logistics, health and safety and evangelism. The team pitched camp in Mukono for their first pitstop. 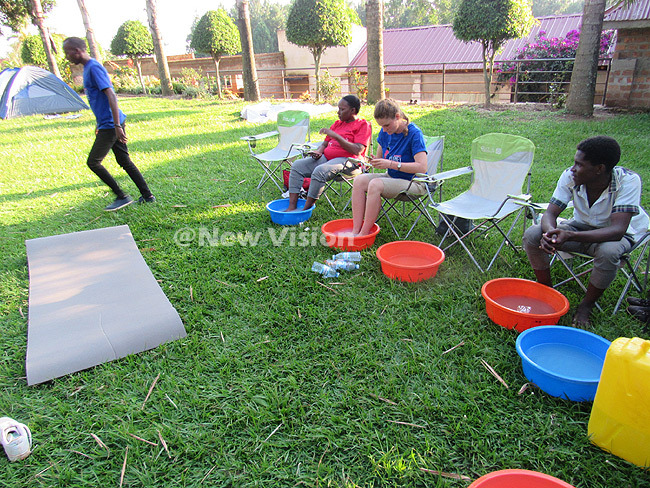 A new day, a new task ahead. After early morning stretching, cleaning up, breakfast and a spiritual session, the walkers were back on the road.

It was time to say goodbye to Mukono and march on to Lugazi, and what a sweet victory it would feel like upon reaching the land of the sugarcanes! 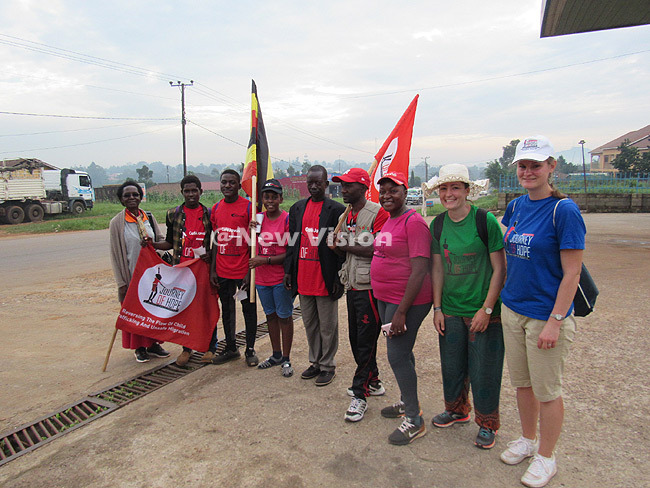 The walkers were in fine form, feeling energetic and raring to chalk off kilometre after kilometre.

Linda, Tamara, Timothy, Caitline, Aaron, Simon Peter, Rita, and I, took it one step at a time as we wormed our way into Mbalala.

Once the full force of the passing huge trucks blew Tamara's hat off her head as the three flags, clamped firmly in my fist, Timothy's and Aaron's, fluttered wildly above. 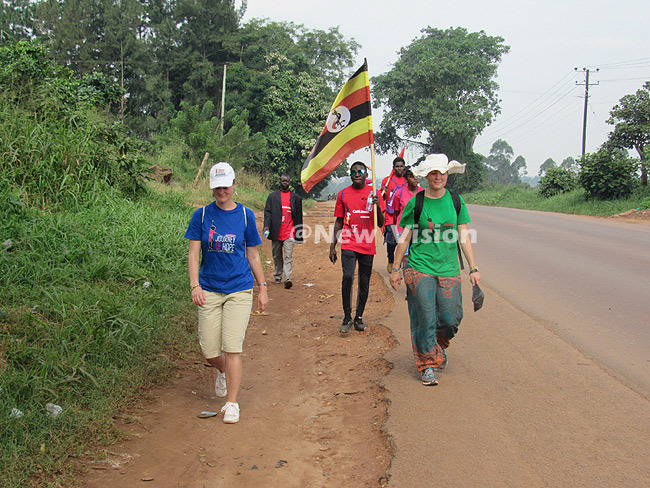 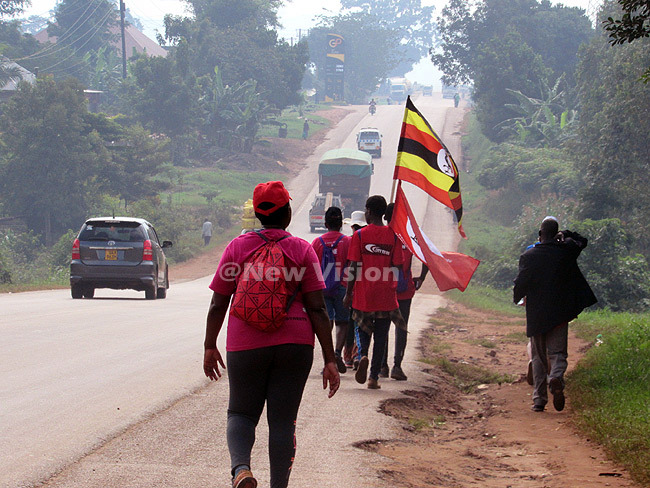 Along the way, in a place called Namataba, we found a boy walking in our direction. He is nine and an orphan. Apparentyl, he was left for dead by his stepmother. Hospitalised after his ordeal, the boy's grandmother took him in, but later chased him away.

Desperate, little Richard walked and slept on the streets aimlessly. The Dwelling Places team, upon learning of his experience, rescued him. 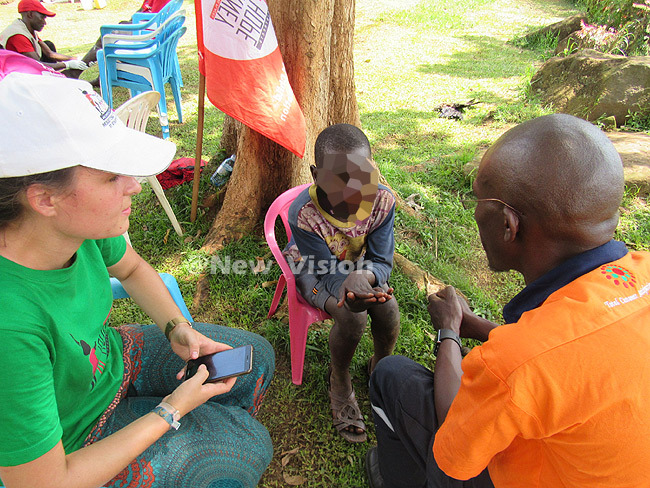 Simon Peter Adong, 51, is walking to Karamoja. That's where he lives. He offered 19 acres of his land in Lomaratoit Primary School for the construction of the secondary school. 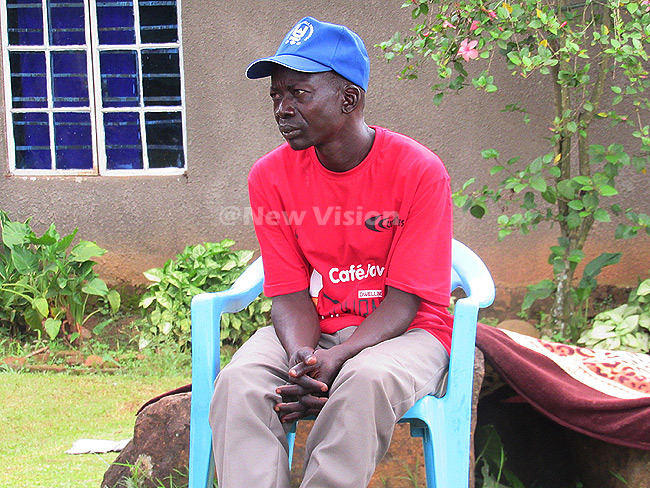 The walking team took to a break, during which the fantastic medical team were on hand to offer a massage to the walkers and also treated rescued Richard of his wounds. 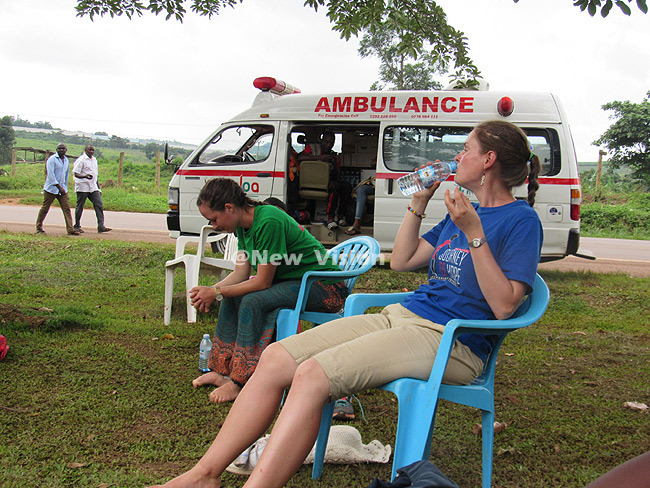 Meet the youngest walkers on the team.

Caitline learnt a lesson today: Mind the shoes you wear for a 20km-plus walk. Because of her choice of footwear, she got some blisters under her feet. "Otherwise, the weather was okay and favourable, and I look forward to walking through Mabira forest tomorrow," she said.

For Timothy, it is all about walking in the footprints of street children. "I hear some people calling street kids thieves in Kampala. But have you bothered to know why they end up on the streets in the first place?" 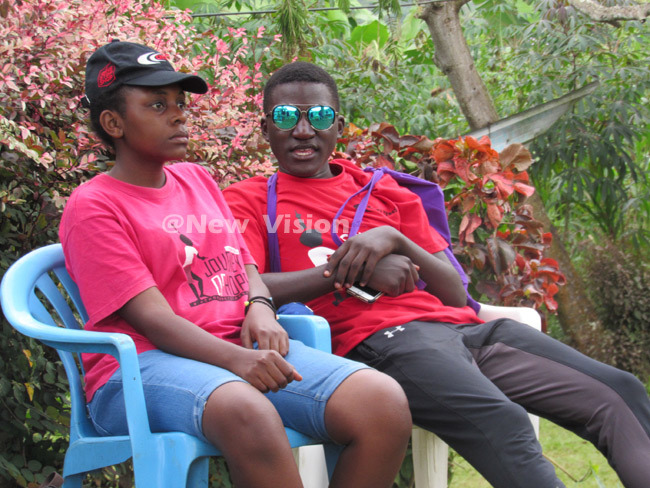 When the team started seeing fields of sugarcane, they knew Lugazi was in sight. 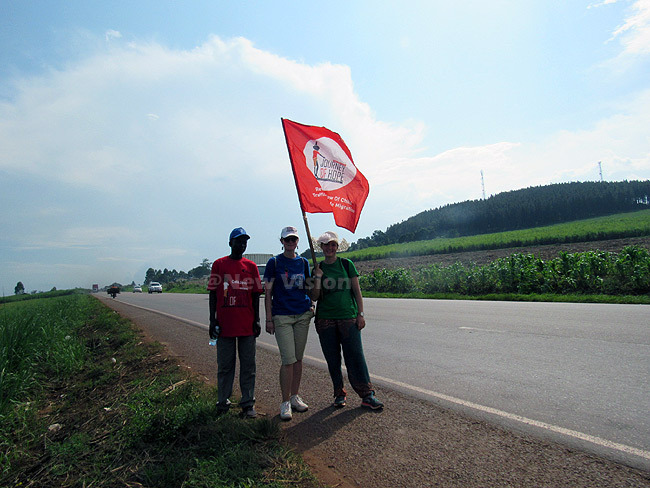 A snacks break, thanks to the logistics team, to give them the final thrust they needed to get to Lugazi. 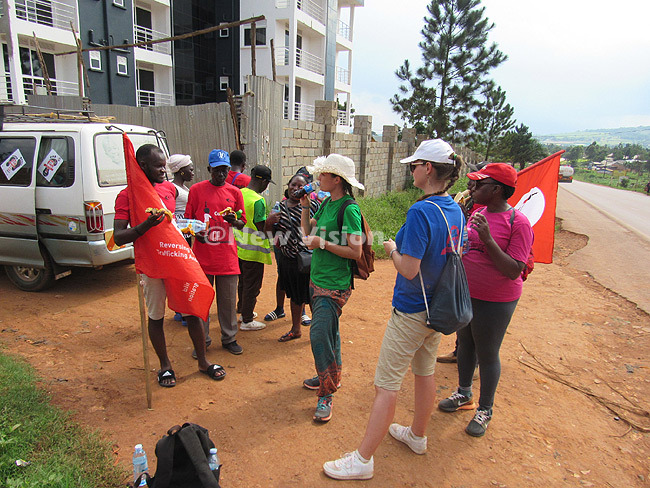 Meanwhile, as the walking team did their thing, not far away, the evangelism team were visiting schools in the area.

They were at Talents College, Jes Jonny Primary School and Mehta Secondary School spreading the Word. 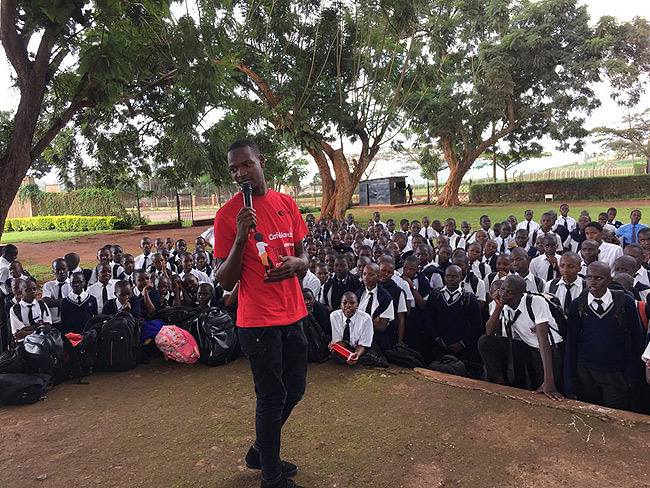 "Our message is that students can stay in school. Students can be agents of change," said Ronald Amanya, the founding director of Soul Touch Ministries, who is leading the evangelism team on the Journey of Hope trail.

The team is also talking to the learners they meet about decision making in terms of career.

"It is also an opportunity for them to get saved. It has been a good reception so far. Among the 1,400 learners we have met in the schools, 500 have got saved," adds Amanya, fondly called Papa Ronnie here.

The #SchoolsNotStreets club has also been formed in schools that have been engaged. 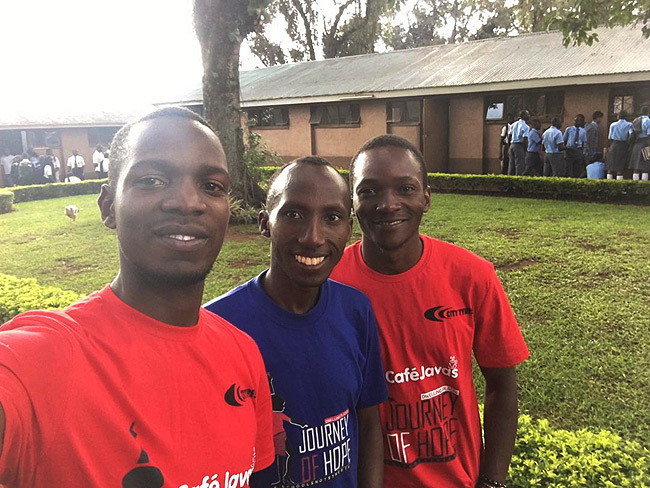 The second pitstop, a new campsite. Spending the night in LUGAZI. 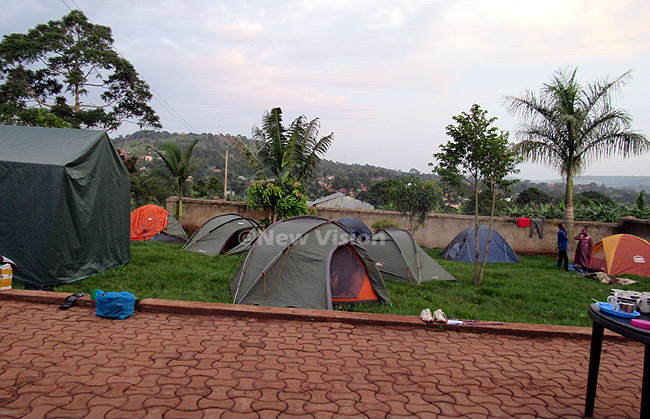