Each household received a 100 kilograms of cassava flour.

Each household received a 100 kilograms of cassava flour.

NATURAL DISASTER        RELIEF FOOD
A total of 400 families affected by hailstorm in Buyende and Kamuli districts received relief food items on Sunday following the distaster that ravaged their area, leaving 18 people dead and  682 families homeless on 23 April 2019.
St.Gyaviira Home of  Buyende in conjunction with  Miryante Orphanage  a non-governmental Organization (NGO) distributed 400 bags of cassava flour,in the sub-counties of Nkondwe,Kidera and Buyende.
Each household  received a 100 kilograms of cassava flour. 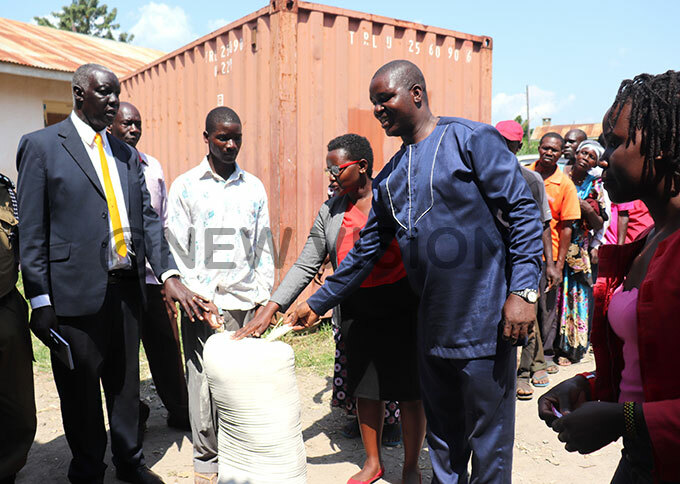 Buyende Resident District Commissioner, Canon Ogwanga Odyero (left) with Budiope West MP Robert Musoke (right),with communication officer, Miryante orphanage Doreen Tigah (with spects) handing over cassava flour to Buyende hail storm victims at Kidera sub-county (Photo by Paul Kiwuwa)
Doreen Tigah, Communication officer of Miryante Orphanage said the food worth sh37m was given by donors from United States of America, following the public outcry of the disasters that wrecked the two districts on 22nd April Monday night.
Tigah said : ", We have  responded to a call raised by the Budiope West MP (Buyende district) Robert Musoke,  who asked the government and all well-wishers to come to the  rescue of the affected residents When the hailstorm wrecked the houses "
Musoke warned the residents against selling the food items. "Although donors have given you food it is not sustainable, I appeal to the victims to grow their own food to ensure food security." Musoke added.
Musoke appealed to more well-wishers to help. "This is not a political issue, we need more food for survival, since  many people  were left homeless."
The Buyende District Resident Commission, Canon Ogwang Odyero  who supervised the food distribution said: " Government, through the State minister of Disaster Preparedness and Refugees,  Musa Ecweru, and the State minister for Karamoja Affairs, Moses Kizige, donated to the victims 200 bags of maize floor, 100 bags of beans, 100 saucepans and 500 mosquito nets. " 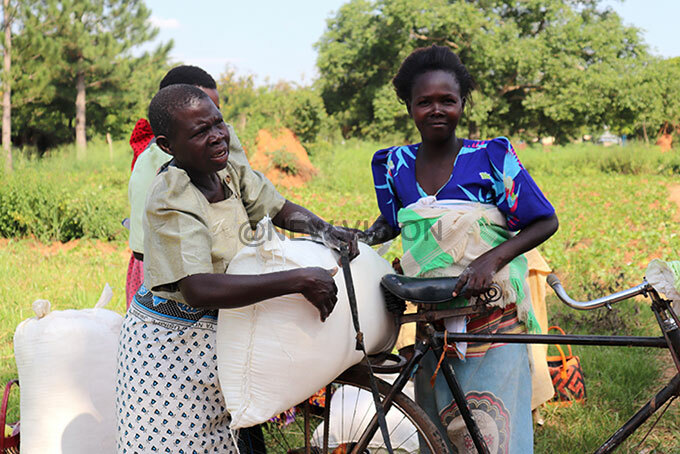 Justine Nangobi (left) with Lewunia Namusabi of Nkondwe sub-county, Buyende district loading cassava flour on the bicycle, which was donated to them at their sub-county on (Photo by Paul Kiwuwa)
According to police reports eighteen people were confirmed dead and over 140 injured after a rainstorm swept through 18 villages in Buyende and Kamuli districts.
Odyero said the storm swept away over 300 homes and residents resorted to seeking refuge at Kidera Health Centre IV. Survivors have been transferred to Kidera Health Centre IV and Kamuli General Hospital respectively.
The Speaker of Parliament, Rebecca Kadaga, in matter of national importance during the House debate last month, expressed sadness about the disaster.
She said the hailstorms had become violent and resulted in fatalities because of rampant deforestation. She urged leaders at the lower level to check wanton abuse of the eco-system.
Kadaga said the population should be encouraged to plant fruit trees.
The in-charge of Kidera Health Centre II, Dr Anton Kwiri, said the centre had admitted 70 patients with grievous  injuries, however most of them had been discharged.
"The facility was congested, we referred those especially with open wounds and fractures to Kamuli General Hospital in Kamuli district for further administration," he said.
According to Abdul Mulawa, the Buyende district police commander, the storm ravaged Nabweyo A, Nabweyo B, Nakabembe A, Kabugudho and Itamia villages in Kidera sub-county, Buyende, leaving hundreds without shelter.
The storm ravaged the villages of Kabugudo, Nabweyo, and Nakabembe in Kidera town council.
In Kamuli, five villages including Balawoli, Namaira, Nabirama, Kasozi and Kakanhu were ravaged by the rainstorm,In the five villages in Kidera, the dead were identified as Lukiya Namususwa, Nusula Tusuana Wicho, Friday Koowa and Tumwebaze.
Other villagec are: Kiwambya, Katogwe, Bunakwita, Nfumagini, Kitete, Nabigwo, Matiki A and B, Bugeziya, Kyoga triangle among others