The move, according to Gasta Kakaire the executive director for NDC will create awareness among students on international affairs and instill confidence and creativity in students.

The move, according to Gasta Kakaire the executive director for NDC will create awareness among students on international affairs and instill confidence and creativity in students.

EDUCATION SCHOOL DEBATE
The government through the National Debate Council (NDC) has started a new initiative to revitalise debates in both primary and post primary schools in the country.
The move, according to Gasta Kakaire the executive director for NDC will create awareness among students on international affairs and instill confidence and creativity in students.
Kakaire  said there is need to encourage debates because producing a wholly student needs one who has training in both curricular and academics.
He said they are working with different government institutions including the parliament of Uganda to promote debating in schools.
During the Rwenzori regional debating competitions organized by NDC in Fort Portal receently,  Kakaire said  the best schools from across the country will debate in Parliament in December.
Kyebambe Girls' Secondary School won the regional debating competition that was organized under the theme "Poverty fueling corruption in Uganda".
"We have been so impressed by the students of Kyebambe they are so confident and there level of debating is very good they will represent the region as champions at the finals to be held in the chambers of parliament," Kakaire said. 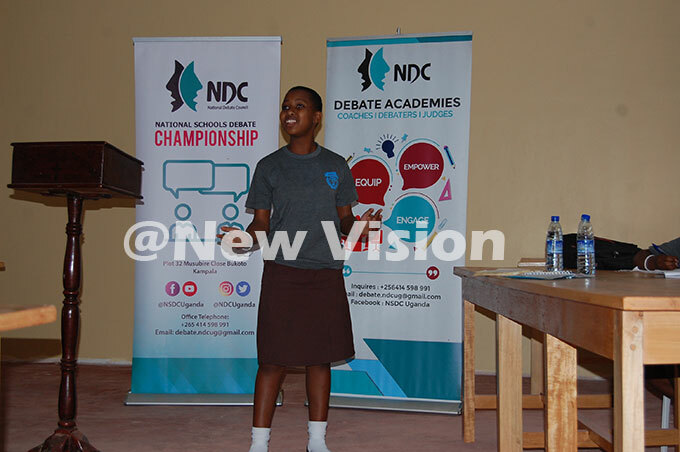 Kakaire said  debates are changing from the old boring model and that now students are given topics which they research on with facts and present them.
Kakaire said the mock debate offers divergent solutions to practical learners to enable students acquire life time skills to enable them build a better future.
At the event, students from over 20 schools within the districts in the Rwenzori region, Kaabarole, Bunyangabu, Kasese, Kyenjojo, Kamwenge, Bundibugyo, Ntoroko and Kyegegwa participated in the competition.
Asaph Mugume a retired secondary school teacher said  there was need to encourage students to join debating clubs because it's through  debating that students come up with solutions to some of the issues that affect them and the society.
"Working with different stakeholders we need to ensure that all students participate in debating from primary up to secondary it is good for them and for the society," Mugume said.
Banyatereza Golden Jubilee Primary School  in Fort Portal won the primary category that attracted over 15 schools.
Doreen Kanyiginya a student of Kyebambe Girls' Secondary School who was awarded the best speaker said   they had made research on a wide range of topics and motions that are expected to test the debaters on world economy.
"We are ready to represent the region at the national level because we have been doing research on very many topics we are set for the event in December," Kanyiginya said.