Woman arrested for stealing from hospital
Next Story

BEIJING - President Yoweri Museveni has addressed the Coordinators Meeting on the Implementation of the Follow-up Actions of the Beijing Summit of the China-Africa Cooperation (FOCAC) Tuesday in China's capital Beijing.

On the second of his four days in China, Museveni met his counterpart President Xi Jinping and held bilateral talks with him at the Great Hall of the People in Beijing, thanking him for "inviting me to China and asking me to officially open the follow-up meeting on the FOCAC resolutions."

"Besides their role in supporting our African liberation cause, I also thank the Chinese government, especially under President Jinping, for supporting Africa's development. In Uganda, China has helped us build two dams and set up industrial parks.

"We also witnessed the signing of several memoranda of understanding between our countries that will see our countries co-operate closely in the fields of foreign affairs, trade and economy. China is a reliable partner and we thank them," tweeted Museveni. Below is Museveni's full speech at the coordinators Meeting on the Implementation of the Follow-up Actions of the Beijing Summit of the China-Africa Cooperation (FOCAC):

In September last year, Your Excellency President Xi Jinping, the Government and people of this Great Nation hosted the 3rd FOCAC Summit bringing together African Leaders to deliberate on the way forward on the 3rd FOCAC Cycle running between 2019-2021. The theme of our meeting was: "China and Africa: Toward an Even Stronger Community with a shared Future through Win-Win Cooperation." We had a very successful Conference which adopted two essential outcome documents including: "Beijing Declaration: Toward an Even stronger China - Africa Community with a shared Future" and the "Beijing Action Plan 2019-2021." In these two essential documents, we agreed and mapped out a framework through which we are pursuing this cooperation for mutual benefit.

However, even before we talk about the "Beijing Declaration", let us, first, cast a glance abit further in recent history.  By 1900, the whole of Africa had been colonized by the Western Imperialist countries of Britain, France, Portugal, Spain, Italy and Holland except for Ethiopia that had defeated the Italian invaders in 1896.  The infamous Congress of Berlin, 1884-85, of the West European Powers, had agreed that Africa, having gone through 400 years of slave-trade by that time, should be percelled out into colonies of the respective European Powers. This ignominious capitulation by Africa was on account of internal weaknesses which we do not have time to go into here.

However, by 1994, South Africa, the last occupied country in Africa, had been re-conquered by the indigenous people. One of the three factors that enabled Africa to end these five centuries of shame (the slave-trade and the colonial times), were two happy events that took place in Europe and Asia.  The first happy event was the October Communist Revolution in the Soviet Union and the second was the Communist victory, here, in China, in 1949.

These two events meant that an anti-imperialist camp had emerged that, eventually, contributed to the liberation of Africa. The other two factors that helped us to regain our freedom were the continued resistance of our people, this time led by the more modern-minded nationalist freedom fighters unlike the chiefs who, in vain, tried to resist; and the mutual bleeding of the imperialist countries in the form of the 1st and 2nd World Wars.  Those inter-imperialist wars, weakened them so much that they could not re-assert their positions in the colonies after the wars, not for want of trying but on account of the change of the balance of forces in the world. The massive anti-colonial movement in Africa, India, Indonesia, Indo-China, etc., was now backed by the socialist camp at the global level.

The Soviet Union, China,North Korea, Cuba, etc., gave serious military, political and diplomatic support to the anti-Colonial Movements in Africa and Asia. Therefore, the present relationship between China and Africa is not new.  Apart from the ancient links between China and the East African Coast, that relationship was intensified in the anti-colonial period. After colonialism, even when China itself was still under-developed, they, nevertheless, extended economic solidarity to Africa as shown by the TAZARA project that helped Zambia and Botswana to beat the blockade of the White Fascists and colonial regimes of Southern Africa in the 1960s (the Portuguese in Mozambique and Angola, the Ian Smith regime in Zimbabwe and the racists in South Africa and Namibia).

As we gather here, therefore, we cannot forget to salute the Communist Parties of China, the USSR, Cuba and the other socialist countries that constituted the third factor in our emancipation.

Furthermore, we should salute the Communist Party of China for correctly handling the internal situation and within 70 years propelling China from position no. 45 in the global economy with an economy of $947 (using GDP per capita)in 1949in terms of the size of the economy to the second biggest economy today.  On account of that capacity, China is able to give Africa the massive solidarity they have extended to us, which nobody else was prepared to extend to us.  One of our engineers recently told me that the Uganda Railways tried in vain to get support from the World Bank until one official told them that countries that build railways do so with "their own money".  Such a statement from an economist that, purports to support Africa's transformation through Private-Sector led growth, shows that some actors are not serious. How will the private-sector grow if it is bedeviled with expensive transport costs, expensive electricity costs or no electricity at all, expensive cost of money, etc.? It is against that negativity, that China's solidarity should be measured. China, of course, has the advantage of having a huge area of land of 3million square miles with all the natural resources therein and a population of 1.3billion people, under one political authority.

Africa, on the other hand, is a huge area of about 12million square miles, 4 times the size of China, currently with a population of 1.25billion people that will be 2.5billion by 2050. One of the complications, however, is that Africa, on account of history, is still divided into 54 countries with, of course, the corresponding number of political authorities.  The fragmentation of the African market has been one of the 10 strategic bottlenecks that were detected over the last 50 plus years of struggle and shared with our African brethrens.

During the 23rd APRM session of June, 2015 in South Africa, these strategic bottlenecks were adopted as the shared view point of Africa with some modifications.


The strategic bottlenecks of Africa's growth and transformation are:

Ideological disorientation where identity (tribe, religion, gender) is taken to be more important than interests e.g. economic prosperity through trade and exchange of goods and services;

this emphasis on identity leads to sectarianism which undermines the creation of capable State pillars (Army etc.); the State, therefore, cannot guard peace, hence the calling in of the ineffective UN;

the philosophical mistake of not realizing the importance of the private sector and, therefore, disrupting it as was done by Idi Amin in Uganda when he expelled our Asians who formed the bulk of our entrepreneurial class; this  led to the collapse of the small monetary economic sector of Uganda of that time (1972 - 1986);

the under-development of the infrastructure (the railways, electricity, ICT backbone, piped water, irrigation systems etc.); this leads to high costs of doing business and undermines the profitability of companies, para-statals or private; I have already referred to this aspect earlier in these remarks; I have already referred to the bottleneck of the fragmented African Market; If one produces but one does not get enough buyers, that business will collapse; the producer and the buyer are the life blood of modern business; the more buyers you have, the better for the business; fortunately, Africa is moving well on this issue of market integration through the East African Community (EAC), the Common Market for Eastern and Southern Africa (COMESA), the Southern African Development Community (SADEC), the Economic Community of West African States (ECOWAS) and, ever since the Abuja Treaty of 1991, the African Common Market and, more recently, the CFTA.  It was not until the Lagos Plan of Action of July, 1980, that our leaders understood this, 25 years after Sudan's independence in 1955

The export of raw-materials, thereby losing money and jobs to the outside world was also another bottleneck causing endless haemorrhage; hence, the need for industrialization.

The underdevelopment of the human resource through lack of education and on account of poor health was another bottleneck.  However, many African countries, after independence, expanded education. In Uganda, today, 8.8million children are in the Primary Schools, 1.6million are in the Secondary Schools, 200,000 are in the Universities and 70,000 are in Vocational Schools. This is a total of 10.7million Ugandans, which is 26% of the total population.  This figure does not include those in the pre-primary classes.  The health of the Africans has also, somewhat, improved on account of, mainly, immunization.  That is why the population has grown from 120million people in 1900 to, today, 1.25bn.

Then there is the under-development of Agriculture in spite of the estimated 874 million hectares of good arable land.

The under-development of the services sector (banking, insurance, tourism) leaves much of Africa's potential in this area underdeveloped.  Some of it is affected by insecurity and terrorist activities on account of the weak State structures (especially the Army) already referred to above. 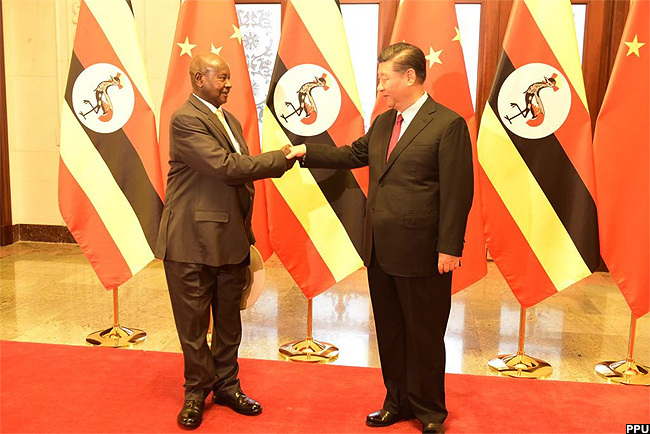 Then, finally, for a long time, there was the problem of suppressing democracy, which created unaccountable regimes. This problem has been addressed almost everywhere, although we need to continue refining the quality.

The good thing is that many African leaders are now aware of this multi-dimensional challenge to Africa's growth and transformation, unlike in the past when some of the actors would only emphasize one dimension such as education and forget all the others.  When you are aware of a problem, then you cannot fail to solve it.

Infrastructure connectivity, as mentioned above;

Africa and China need to emphasize what some people do not seem to remember. Modern wealth and jobs creation, means, as already alluded to in these remarks, understanding the importance of two primary actors: the producer and consumer. When I buy what you produce, I am supporting your prosperity and vice-versa. High levels of production without high levels of consumption, will result into a disequilibrium like that that occurred in 1929 that preceded the Great Depression in the capitalist World.

Finally, Africa and China should, therefore, establish an equitable trade and development model that should emancipate humanity from the primitive tendencies of win-lose situations. We should all work for win-win frameworks. China, by supporting infrastructure, which is the base of the production of tradable goods and services is already moving in the right direction. Indeed, all the other seven points in the Beijing Declaration are very crucial and coincide with the desired resolution of the strategic bottlenecks that we had independently identified. Let China and Africa move forward. We are moving in the right direction.

I thank you all.

Lions in a free eye screening and treatment camp