Congratulatory messages pour in for the Cr...
Next Story

The king of Toro Kingdom checks in to watch Uganda's football team prepare for their second Group A encounter with Zimbabwe due on Wednesday in Egypt.

The king of Toro Kingdom checks in to watch Uganda's football team prepare for their second Group A encounter with Zimbabwe due on Wednesday in Egypt.

The youthful monarch coolly appeared at the multi-purpose facility in Egypt's capital wearing a Cranes jersey under a dark jacket, jeans and sneakers.

In his characteristically calm demeanour, Oyo checked in to watch Uganda's football team prepare for their second Group A encounter with Zimbabwe due on Wednesday - and the regal aura that he naturally brought to the camp will have injected even more morale into a side that has so far impressed in the new-look African competition.

Uganda's Minister of State for Sports Charles Bakkabulindi, too, was present.


This time around, as many as 24 teams are taking part in Africa's flagship football tournament -- the largest cast ever -- in its 32nd edition.

The Cranes, pitted with hosts and record title holders Egypt, and geographical neighbours DR Congo, got off to a flying start Saturday by beating the latter 2-0 in a solid performance that instantly swayed opinions of keen observers.

Head coach Sebastien Desabre will have been delighted by his side's top-class production against the Leopards, who, in the buildup, had been heavily favoured to advance from the group by bookmakers.

But they came up against a Cranes side laced with lethal power and oozing the confidence required for this stage of continental football. Two headed goals in either half by Patrick Kaddu and Emmanuel Okwi did well to buoy Uganda to the summit of Group A, leapfrogging the Pharaohs on goal difference.

One keen observer of both goals was King Oyo himself, who was watching the action from the VIP section of Cairo International Stadium. 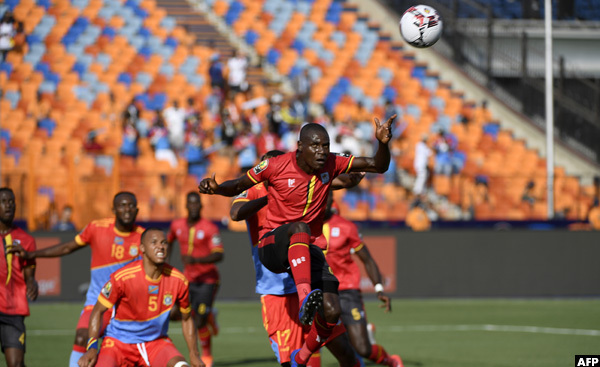 Patrick Kaddu beat everyone on the liftoff, before nodding home Uganda's opener against DR Congo

Kaddu put Uganda on the scoreboard from a Farouk Miya-delivered corner when he rose highest to head past DR Congo Ley Matampi 15 minutes into the group's second game.

Trailing and rather shellshocked, Florent Ibenge's side laboured to launch a meaningful comeback, but they failed to break the shackles of resilience and industry of their opponents, made only worse by Okwi's second-half goal that was scored in similar fashion to Kaddu's.

After that opening victory, Oyo delivered his congratulatory message to the Cranes on Twitter, saying he delighted in being "present and cheering you to victory" and wishing the team "all the best in the next games".

Wednesday's duel against the injured Warriors of Zimbabwe - they lost 0-1 to Egypt on Friday - will kick off at 8pm Ugandan time.

Victory for The Cranes will more than seal their progression to the knock-out stage, and if that comes to pass, it will be the first time since 1978 (when Uganda finished as runners-up) that the east African giant makes it thus far into the competition.

Already, Saturday's win was Uganda's first at the Nations Cup finals since 1978.

Dance Off evicts three crews in the first of its ejections

Ngule dance crew evicted, Transformation 256 still in for the money

Dance Off evictions: Who will go first