The coaches who've steered the Cranes at p...
Next Story

The partnership gives UTB rights to brand Destination Uganda at local and international games in which the Uganda Cranes are participating.

The partnership gives UTB rights to brand Destination Uganda at local and international games in which the Uganda Cranes are participating.

KAMPALA - Two days before the Uganda Cranes get their latest Africa Cup of Nations campaign underway in Egypt, back home, a key partnership involving football and tourism has been formed.

The Uganda Tourism Board (UTB) on Thursday entered into a sh200m sponsorship agreement and partnership with Uganda's football governing body FUFA as the official tourism partner.

To that effect, the two institutions signed a Memorandum of Understanding, which will see both parties work hand in hand to promote brand Destination Uganda at both the domestic and international scene.

So what does the deal mean?

The partnership gives UTB rights to brand Destination Uganda at local and international games in which the Uganda Cranes are participating as well as work with the players in destination marketing campaigns. 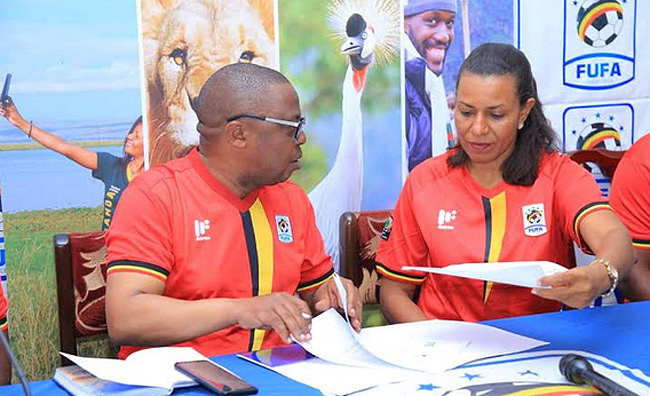 "The Uganda Tourism Board is prioritising the building of positive destination brand equity and brand value through creating high-level brand awareness partnerships such as the one witnessed here today with FUFA," UTB chief executive Lilly Ajarova told a press conference at FUFA House in Mengo, Kampala.

"Football is the world's greatest sport and viewed by billions of fans across the world. In Uganda, the Uganda Cranes is the greatest football brand, but more importantly, the leading sporting ambassadors to the region and the world.

"We want to open up brand Uganda to the massive sports audience where our national team participates," she added.

On Saturday, Uganda will face off against geographical neighbours DR Congo at the 32nd edition of Africa's biggest footballing showdown. Playing in Group A won't be easy sailing for the Cranes, who are also pitted against hosts Egypt and Zimbabwe.

This is the first Africa Cup of Nations widened from 16 to 24 teams. Beyond the turf, Uganda's national football side's prospects are bright.

"We are most excited about how we can best brand our national team internationally and also use the FUFA DRUM to create awareness of Uganda's tourist attractions as the games traverse the whole country," said Ajarova.

"We believe this is an incredible opportunity to connect with local communities and football fans across the country, and will enable us to reach out to more tourists both locally and internationally."

During the MOU signing, FUFA First Vice President, Justus Mugisha, the idea is to use the power of sports to position Uganda on the global stage.

"This initiative by FUFA and UTB will showcase how football can be used to promote destination Uganda. We are proud to be in partnership and we hope to continue building our nation through sports and tourism," he said.

Mugisha said it also "a big opportunity" to enrich Ugandans with the knowledge about their own country.

At the beginning of this year, UTB embarked on initiatives to promote sports tourism.

It started off by established a partnership with the Uganda Golf Union in which the Uganda Golf Tours were born, allowing golfers traverse different parts of the country playing the game they love, coupled with touring their country.

EAC has no favoured presidential candidate yet