Govt dragged to court over Bugolobi land g...
Next Story

The ESIA studies are carried out to establish the potential positive and negative social and environmental impacts of the proposed projects.
The oil companies are required under the law to undertake ESIA studies and submit to the National Environment Management Authority (NEMA) reports capturing the findings for approval before the execution of the projects.
NEMA and the Uganda Petroleum Authority (PAU) and oil companies will hold a public hearing about the ESIA report for Kingfisher oil development projects at Rwemisanga Primary School in Kyangwali sub-county in Kikuube district. 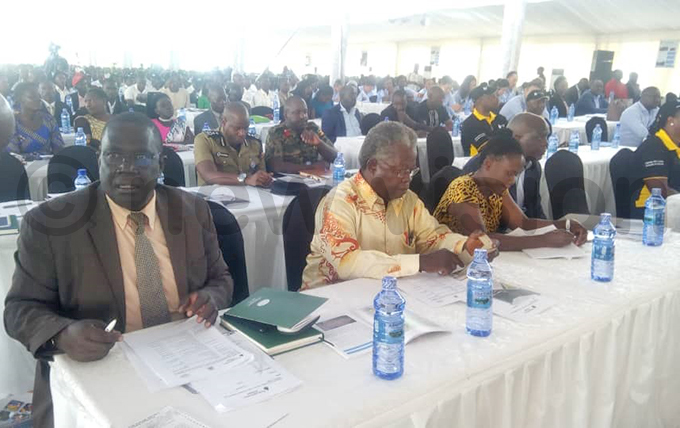 NEMA executive director Tom Okurut (left) flanked by NEMA board chairman Sandy Stevens Tickodri-Togboa during the hearing. Photo by Pascal Kwesiga
They will hold another public hearing at Kabaale Primarily School in Buseruka sub-county, Hoima district on Friday.
CNOOC Uganda is the lead operator of the Kingfisher oil field. Total E&P and Tullow Uganda and CNOOC Uganda are joint venture partners in Uganda's oil and gas sector.
The oil companies plan to set up a number of facilities in Buhuka parish in Kikuube to extract oil from the Kingfisher fields. They include a central processing facility (CPF), four well pads holding 31 production and water injection wells, an airstrip, jetty, construction material yard and camps and access roads.
The 46km feeder pipeline which will move crude from the CPF in Buhuka to the delivery point at the proposed Kabaale Industrial Park in Hoima is also part of the Kingfisher oil development infrastructure. 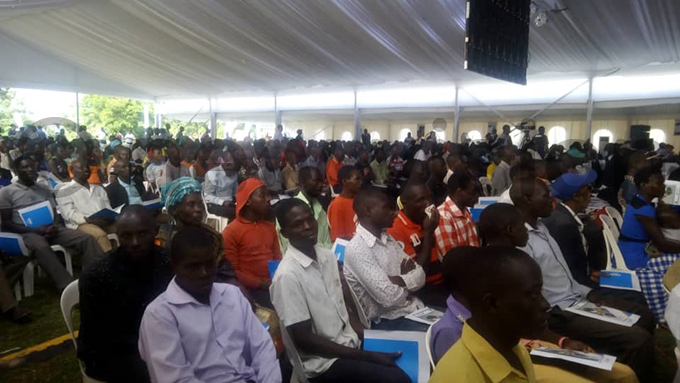 NEMA said it received the ESIA report from the developers of the proposed projects in April and invited the public to scrutinize and submit views before the public hearings.
The public hearings are meant to get more views from stakeholders and their opinions are expected to enrich the ESIA report during the review process.
These activities precede the Final Investment Decision by oil companies. It's that decision which is supposed to trigger the development of facilities and eventual oil production. It's estimated that the oil companies will spend about $20b on the development phase. 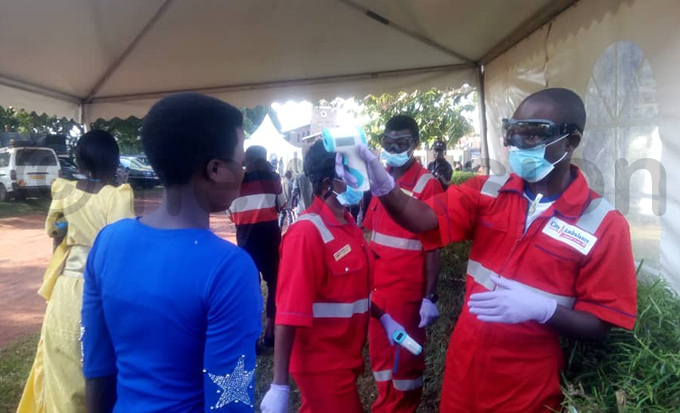 Attendees being scanned for symptoms of Ebola upon arrival for the hearing. Photo by Pascal Kwesiga
Public hearings for the Tilenga fields in the northern part of Lake Albert were held in Buliisa and Nwoya districts last year. The Kingfisher fields are located on the south-eastern part of the lake.
Uganda and oil companies are still locked in negotiations centred on key aspects before the multinationals can reach the investment decision. Discovered in 2006, Uganda now plans to start oil production in 2022 after missing previous times.
It remains to be seen if oil production will not be further delayed beyond 2022.

DAY ONE | Nomination of candidates for LC polls

Join my party or forget about endorsement-Bobi Wine