Around the world in 10 pictures
Next Story

The sh900m building located at Kiwatule was commissioned by the minister of trade, industry, and cooperatives Amelia Ann Kyambadde.

(From right) Minister of trade, industry and cooperatives Amelia Ann Kyambadde, Stephen Nabende the board chairman WALIMU SACCOs Union and Margaret Rwabushaija the workers MP and others commissioning the new permanent home for the WALIMU SACCOs Union in Kiwaatule. (Photo by Agnes Nantambi)

The sh900m building located at Kiwatule was commissioned by the minister of trade, industry, and cooperatives Amelia Ann Kyambadde.

EDUCATION
Teachers under their SACCOs WALIMU (WaSU) have acquired a new permanent home to help in facilitating quick processing of loan services.
The sh900m building located at Kiwatule was commissioned by the minister of trade, industry, and cooperatives Amelia Ann Kyambadde.
While officiating at the launch, Kyambadde admitted seeing teachers suffering due to poor pay but said that with the Sacco money, many teachers are heading for a decent life.
"Because of the suffering I had seen many teachers go through, I had to make an attempt of reviving cooperatives and support them so that they can access soft loans to help them live a decent life," she said. 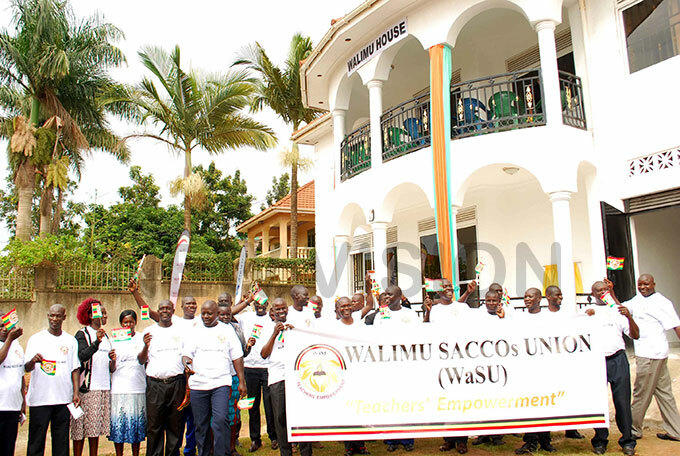 Teachers under their Sacco WALIMU SACCOs Union matching within the compound of their new building in Kiwatule. (Photo by Agnes Nantambi)
"I am glad that you have a union in place; people were acting differently when teacher's issues rise up if it was a different government other would be sacked," she said.
Kyambadde called for the integration of the cooperatives training into the education curriculum to help a big number of people learn how to manage funds in the cooperatives.
"The biggest challenge we have in the development of cooperatives is lack of skills to manage the funds, this is evidenced in the big number of cooperatives closing every day," she said.
I invested a lot in Saccos but many of them have collapsed due to poor management in addition to politicising Saccos.
Kyambadde warned the teachers against personalising the Sacco property saying this will stem into fights.
She advised the managers of the Sacco to mobilise more teachers to save in order to grow their loan portfolio rather than wait for government support.
The board chairman WALIMU SACCOs Union,  Stephen Nabende said the teachers Sacco has grown a loan portfolio of sh24b adding that more money is still needed to ensure that every teacher can begin an income generation activity.
He said that at the moment, out of the sh25bn promised by the government into the teachers Sacco, only 17b has been dispatched with a balance of sh8b.
"We want this money to be given to us so that all our teachers can start income-generating activities," he said
Margret Rwabushaija, the workers Member of Parliament applauded the managers of the Sacco for good management saying UNATU being the mother of WALIMU is proud.
"Owning this house makes us proud, we now have over 20 properties across the country.
If we save from the little we have, we shall continue to develop.
She promised to continue lobbying Parliament for more funds until the teachers realise a decent life.
The National chairperson Uganda National Teachers Union, Zadock Tumuhimbise applauded the president for standing by his word to inject funds into the teachers Sacco but said the money which was wrongly sent to the microfinance support should be reimbursed to the teachers saying they have the capacity to manage it.
"We expect a continued follow-up on the unremitted funds that are meant for the teachers Saccos. We are glad that over 150 teachers' SACCOs have been established and hope that this number grows to 400 by 2020.
He revealed that majority of teachers were suffering from multiple loans from different banks but expressed optimism that with the teachers SACCO many will be able to get small interest loans to start up income-generating activities to supplement on their incomes.