Toro protests Mumbere's claim to its terri...
Next Story

NDA and the Police have closed 138 drug shops for operating illegally and arrested four people.

NDA and the Police have closed 138 drug shops for operating illegally and arrested four people.

NDA's South Eastern regional Manager Muhammad Lukwago (2nd right) showing to journalists a pack of Pinkoo grip water which was impounded in Iganga town during their operation.  PHOTO: Donald Kiirya
The National Drug Authority (NDA) with the support from the Uganda Police Force has closed 138 drug shops for operating illegally and arrested four people.
The operation in 14 districts in the South Eastern region and covering the entire Busoga sub-region saved an estimated population of 50,000 from quacks or unqualified health personnel operating unlicensed drug shops.
According to NDA's Head of Enforcement Samuel Kyomukama, two of the four suspects were arrested in Namutumba district and the others from Kamuli district and are in custody pending prosecution. 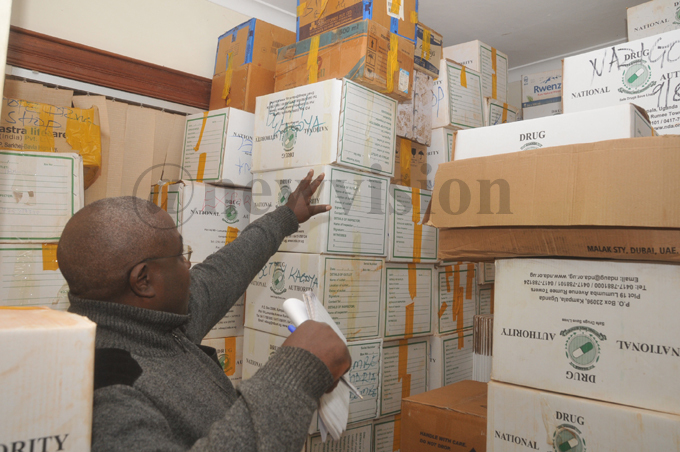 Kyomukama said the operation was in the districts of Bugiri, Buikwe, Bugweri, Buyende, Iganga, Jinja, Kaliro, Kamuli, Kayunga, Luuka, Mayuge, Mukono, Manayingo and Namutumba.
"We closed 138 drug outlets in the operation that begun on June 10th, 2019 and ended on June 14, 2019. The operation led to the inspection of 261 drug outlets, 270 boxes of assorted medicine estimated at sh94m impounded from 138 drug shops," said the NDA's Public Relations Officer Fredrick Ssekyana.
He added that the risk averted by closing the 138 outlets reduces the disease burden of the unsuspecting population from being conned by quacks or unqualified health personnel

Kayiwa can give recitals from any Luganda novel