Cranes’ offensive display was not particularly pleasing, but head coach Sebastien Desabre must have been thrilled with the overall contributions

Cranes’ offensive display was not particularly pleasing, but head coach Sebastien Desabre must have been thrilled with the overall contributions

Cranes fly into the Egyptian capital Cairo on Monday high on confidence.

Besides the fitness concerns on key members within the team, a win against heavyweights Ivory Coast on Saturday was all that Cranes needed marching into Africa's biggest football competition.

Cranes' offensive display was not particularly pleasing, but head coach Sebastien Desabre must have been thrilled with the overall contributions of Denis Onyango in goal, and the back four.

Bevis Mugabi, one of three foreign-based players whose inclusion in the team was contentious, stood his ground at right back just as Murushid Juuko and the unattached pair of Hassan Wasswa and Godfrey Walusimbi.

Whether the four will be the ideal candidates to start against DR Congo in the opening fixture on Saturday is an issue only Cranes coaching staff will know best.

Whoever starts — and that should be on the basis of form — will ideally be expected to support the team's transition into attack where goals remain a problem.

Suffice it to say, Cranes defensive efforts will count for nothing if Uganda fails to identify the right options in attack.

Derrick Nsibambi, Patrick Kaddu and Emmanuel Okwi are competing for a first-team place alongside Farouk Miya — the bookmaker's favourite to lead Uganda's hunt for goals at the championship. 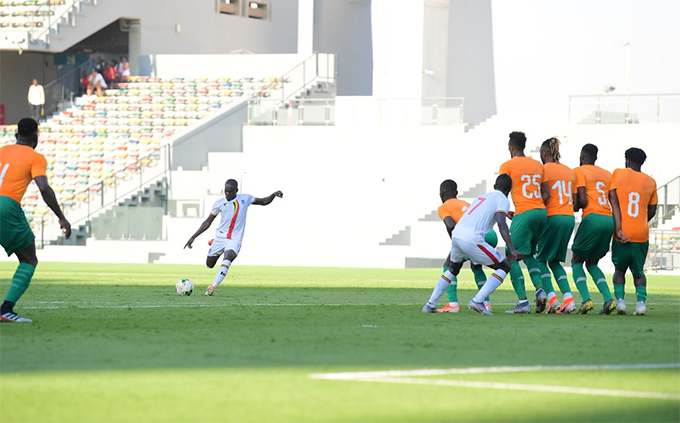 Farouk Miya on setpiece duty during the match. Courtesy Photo

Miya is the shining light of this team. His goal from the penalty spot on 35 minutes earned Cranes that vital win in Abu Dhabi.

His presence and overall contributions to Cranes' current set up are undisputed and is as such a crucial factor in the team's attacking plans.

However, the number one question now is, who among the rest can join him to create the right attacking combination that will dispatch DR Congo on Saturday?

In previous campaigns, Geoffrey Massa was loaded with the responsibility of shouldering Cranes' attacking duties and for the times he struggled in front of goal, the Cranes were fortunate to rely on Miya for the odd goal to dispatch the opposition.

The ideal candidate would be Okwi. He has the experience, good statistics and playing him ahead of Kaddu, who by the way struggled against Ivory Coast, will guarantee the team precision and pace, attributes that could be significant against the Leopards, who just like the current Cranes team, thrive on short passes while in possession, and counter-attacks through the wide areas while breaking down the opposition.

The two faces of Naguru

Why landlords want their rent paid in dollars

Treat yourself to special cuisine