Ebola: US pledges to support Uganda fight ...
Next Story

Residents receiving some of the relief items (Photo by Reagan Ssempijja)

NATURAL DISASTER
Following another tragic incidence of landsides in Bududa district that left six people dead and over 100 households washed away, the hopeless survivors of the landslides were treated to a surprise rescue from MTN Uganda on Wednesday.
Sadly, after completely losing their property and houses, the majority of the residents of Lutsekhe County, Bududa district were left with no option but to seek shelter in the nearby church. Amidst this trying situation, MTN Uganda in cooperation with Uganda Red Cross chose to help the people in the affected area.
At 10:00 am, trucks carrying relief items arrived at the village square where hundreds of residents were eagerly waiting. Although they tried to wear a smile on their faces, it was obvious that they were hurting and sobbing from within.
Phobian Nosoko, a resident and survivor of the landslides welcomed the MTN officials by narrating to them how he lost his son in the landslides. With tears in his eyes, Nosoko says he tried to rush back to the house to save his child but the slides and water hit his house at a terrific speed and force. 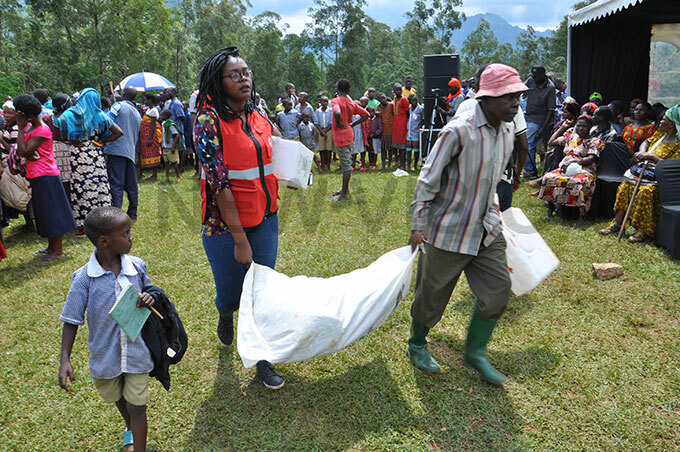 A red cross official helping a resident carry his relief package.  (Photo by Reagan Ssempijja)
"I tried everything but I couldn't save my boy. However, I want to thank MTN and Red Cross for running to our rescue," Nosoko said with teary eyes.
According to Gordian Kyomukama, Chief Technical Officer of MTN Uganda it was incumbent upon them to support Elgon region because the people have also supported them for a long time. Through the Uganda Red Cross, MTN delivered non-food relief items to the residents. 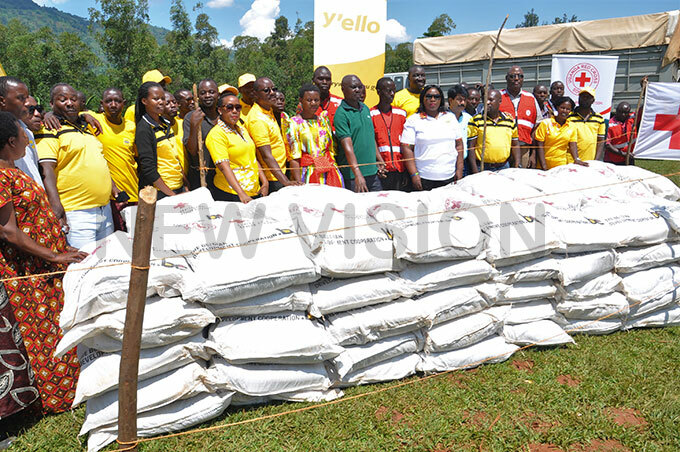 MTN and Red cross officials unveiling some of the relief items (Photo by Reagan Ssempijja)
Each package contained two jerry cans, three blankets, six cups, source pans, and three mosquito nets. Over 100 households benefitted from this delivery and it was upon this that the Member of Parliament for Lutsekhe County, Godfrey Watenga thanked MTN for rescuing his community in less than a week since the landslides occurred.
The beneficiaries who had earlier on come with sad long faces left the delivery area with an ear-to-ear smile.

Rotary is not for the rich, says new club president

Over 500 residents get free health services