Rescue workers evacuate a body retrieved from the sank Mermaid sightseeing boat during the operations to pull it out of the Danube river in Budapest, Hungary on Tuesday. (AFP)

Hungarian police recovered more bodies on Tuesday as they lifted a sightseeing boat that sank in the river Danube in Budapest last month in an accident that has claimed at least 24 lives.

Police were seen removing another four bodies from the vessel while four people are still missing about two weeks after the tragedy, the worst such incident in Hungary in 75 years.

The lifting operation began at around 6 am (0400 GMT) and six hours later the Mermaid tourist boat was almost entirely out of the water.

Early on in the operation, police were seen by an AFP photographer at the site removing four bodies from the vessel.

The Mermaid was carrying mostly South Korean holidaymakers when it capsized and sank on the evening of May 29, just seconds after colliding with a bigger river cruise boat on a busy stretch of the river.

Those on board included a six-year-old girl travelling with her mother and grandparents, and the Mermaid's Hungarian captain.

Only seven of the 35 people on board are known to have survived the accident, with the prospect of finding any more passengers alive seen as practically zero. 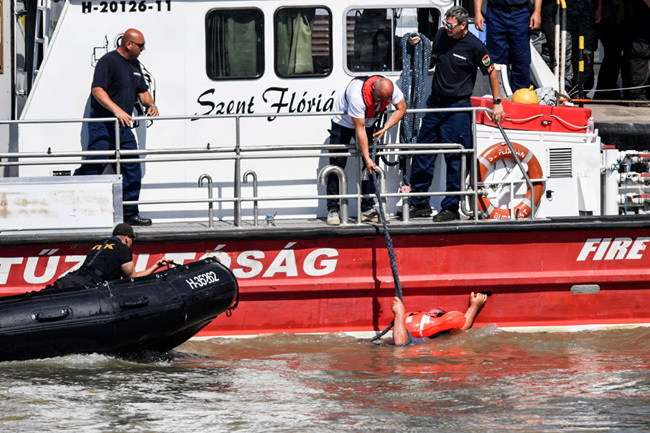 Rescue workers help one of their colleagues out of the water during the operations to pull the sunken Mermaid sightseeing boat out of the Danube river. (AFP)

Hungarian police, who are leading the salvage operation, initially estimated the lifting operation would take around six hours, but work is expected to continue well into the afternoon.

Temperatures above 30 degrees Celsius (86 degrees Fahrenheit) and strong river currents have slowed the operation, which has been stopped several times.

At one point, one member of the rescue crew fell into the fast-flowing water and had to be rescued after almost being swept away.

Divers have periodically been entering the vessel to search the bodies of any victims still inside.

Damage was visible to the rear part of the Mermaid where the collision occurred.

Since the accident divers had been unable to enter the submerged boat due to the strong current in a river swollen from weeks of rain.

The salvage crew instead focused on fixing wire harnesses underneath and around the vessel to prepare it for hoisting by a crane mounted on a barge.

Once out of the water and removed to a secure location the Mermaid will be examined by police who have already launched a criminal probe into the cause of the accident.

The captain of the river cruise boat, the Viking Sigyn, has been arrested on suspicion of "endangering waterborne traffic resulting in multiple deaths".

On Monday the Sigyn was again searched by Hungarian police.

After the incident, the boat had travelled on to Germany before returning to Hungary according to its schedule.

According to Hungary's association of passenger shipping companies, the sinking of the Mermaid is the first such accident to cause mass fatalities in Hungary for 75 years.

For many in South Korea the tragedy has brought back memories of the 2014 Sewol ferry sinking which killed more than 300 people in one of the deadliest maritime disasters in the country.

The Mermaid accident happened on a popular part of the Danube river for pleasure trips, from where passengers can view the city and parliament building illuminated at night.

Dozens of small sightseeing boats ply the river through Budapest every day.

Larger river cruise boats travelling on the Danube between Germany and the Black Sea typically spend several days moored in the capital.

Over 2,000 boda bodas impounded in Kampala