Credit one thing to Weatherhead; talking and then walking the talk. From day one, they have been creating a victory anthem of sorts.

Credit one thing to Weatherhead; talking and then walking the talk. From day one, they have been creating a victory anthem of sorts.

Uganda Baati National Hockey League
Results
Men
Weatherhead 2 Wananchi 1
Rockets 2 City Lions 1
Women
Wananchi 3 DCU 0
Weatherhead's unbending will creates a huge difference in the chase for this year's Uganda Baati National Hockey League.
By performance and statistics, they are front and center with no sightings of breaking the chain any time soon.
Credit one thing to Weatherhead; talking and then walking the talk. From day one, they have been creating a victory anthem of sorts.
They have indeed been speaking in the affirmative that this is their title, the third one in their history to be more precise.
Having earned their place among the natural contenders' bracket following a successful development project, they are now on a continuity wave.
"We are fully concerned with continuity and that is why we always try to groom for the future," said Vincent Kasasa coach-player. 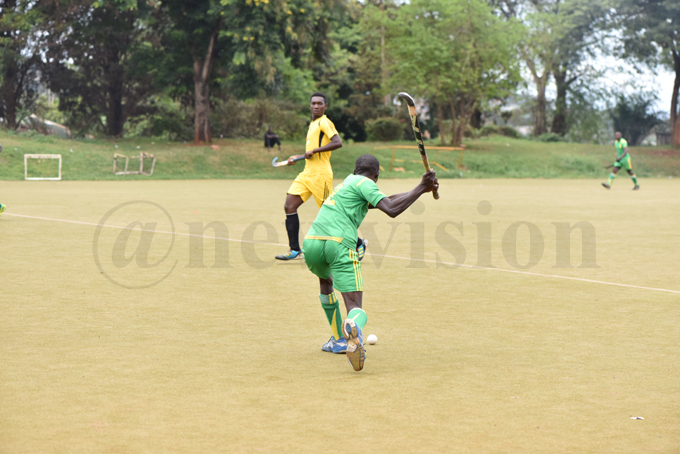 Wananchi vs Weatherhead in a recent league game

Still, they have played unprecedented sportsmanship by releasing some good players like Brian Bayuule, Richard Musimenta, Julius Ssenyonga, Edwin Agaba, Mark Ayebale to debutants Makerere University.
A culture of always striving to get better prevails and the positive results currently reflect on the behind the scenes activations.
Now the first rule of writing off Weatherhead is never write off Weatherhead. They have learned how to calculate the league.
For them, the defining moment is in stopping the top giants. True to their philosophy, the undefeated leaders (22 points) have carefully prepared for big games especially against Wananchi, the most successful team in the history of the game.
In the first round, the two teams shared spoils in a 1-1 draw but on Saturday at the National Stadium, Lugogo two goals from Moses Tushabe and Vincent Kasasa earned them a 2-1 win over Wananchi.
That said this was a crucial Victory that will now cut down on the pressure at the top as it stretches them five points clear above second-placed Wananchi. The teams will still meet two more times in the third and fourth round.
Now, the league may still be far from decided but Weatherhead are enjoying their progress the more.
EMAIL: kbalikuddembe@newvision.co.ug
TWITTER: @casozi14

Amolatar's voice for the underprivileged children