The winners of the series get an all-expenses-paid golfing holiday in Pattaya, Thailand.

The winners of the series get an all-expenses-paid golfing holiday in Pattaya, Thailand.

New Vision staff participate in a putting competition at their compound on June 7, 2019. PHOTOS: Michael Nsubuga
A grand, new exciting golfing series that traversed all regions of Uganda last year, returns next month with action starting at the Uganda Golf Club, July 13.
The Tusker Malt Lager Golf Series will return this time even in a bigger way, according to the organiser Pro Golf, who in a bid to popularise and demystify the sport is continuing with the ‘bring golf home challenge'.
On Friday, it was the New Vision staff's turn to try out the game. Excited staff, ahead of their weekly Friday Yard Party held the clubs for the first time and engaged in a chip and putt competition in their compound with many finding out that it wasn't as easy as it looks, as with established golfers.
But all the same, with the help of Uganda Professional Golfer Abbey Bagalana they received quick tips on handling the club and chipping with the quick learners, rewarded after the chip and putt challenge.
Bruce Twesigye amassed 15 points to top the chipping challenge where Joseph Banyu, David Lukiza, Arthur Mayoga, and Noah Ssenabulya got 14, 11, 5 and 4 points respectively. 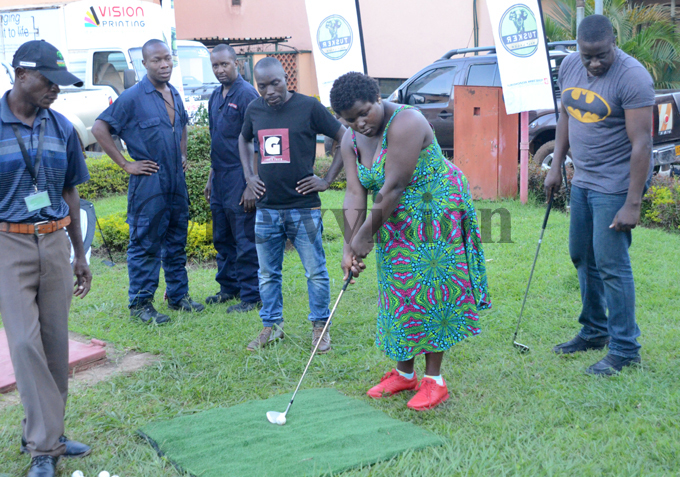 The putting challenge which was the main attraction of the evening had three winners; Kennedy Mwota (8pts), Joseph Bali (7pts) and Joseph Lumala (5pts) also walking away with Tusker branded goodies.
Tusker Brand Manager Cathy Twesigye and Vision Group Human Resource Manager Agatha Gloria Joyday gave away the prizes to the excited staff before they cooled off the evening with Tusker Malt Lager. The Tusker Malt Lager Golf Series is played over 17 weeks, at six golf clubs across the country by all handicapped golfers who earn points at every participating golf club.
The winners of the series get an all-expenses-paid golfing holiday in Pattaya, Thailand.
Teams of two each and individuals can participate in the tournament.

The man who builds hotels from 'katogo' business

Archbishop Nkoyoyo a fisher of men and money

In the New Vision, Tuesday, June 28