CULTURE
The Nnabagereka of Buganda Sylvia Nagginda has called upon parents in the diaspora to be persistent in enforcing their cultures during child upbringing to enable their children to excel in all spheres of life.
Nnabagereka who was speaking as chief guest at the Royal dinner to launch Ekisaakaate in Manchester over the weekend said that there is overwhelming evidence that communities like the Asians in the diaspora that are engraved within their cultures are very successful in all aspects of life.
The event took place at Vermillion Banqueting Hall in Manchester and was attended by over 500 Ugandans from Manchester and surrounding cities like Liverpool, Coventry, Leeds, Sheffield, Birmingham, Scotland and London. 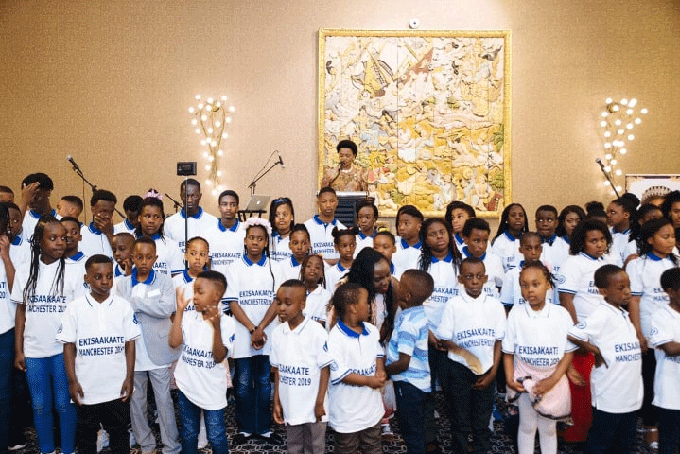 She appealed to the parents to teach children their mother tongues reasoning that diaspora children who don't know their language always find themselves at loss of their identity.
"They try so much to be British, but they will never be and yet when they go to Uganda, they cannot speak their own language," she added.
Nagginda challenged parents to take their role as the first teachers to their children saying this gives their children a good foundation.
"Parents are the first teachers, if you read a lot as parents, your children will automatically be inspired to read as well," she implored.
She called upon parents to call their children by clan names saying it draws them closer to their homes.

Nnabagereka who was accompanied by Namasole (mother of the King) Margaret Nagawa said: "our behaviors as Baganda are universal and compliant with other cultures."
She reassured the parents in Manchester and surrounding areas that bringing up a child with values of Buganda tradition will neither stop them from being British nor integrating within the British way of life.
According to the Chief organizer and deputy Kabaka's representative in UK and Republic of Ireland, Enock Mayanja Kiyaga, the royal dinner was the climax of the 3-day camp which started on May 29 to 31, 2019 with 85 participants ranging from the age of 5-19 years at St. Philips Primary School in Manchester.
The participants were trained in a wide range of topics that included good behaviors, preparing kiganda meal, financial literacy, sexual education, good conduct at home, art and craft among others.
There was also a special session about knife crime conducted by officers from the Greater Manchester police.
Three trainers from Nnabagereka Development Fund (NDF) that included, Andrew Mukiibi, Henry Bogere, and Elizabeth Walugembe took the lead. Nnabagereka held a special meeting session with the parents on the third and last day of the training.
Guests at the royal dinner were entertained by the Ganda Boys and Flavia Wamala, daughter of the late Elly Wamala.
Meanwhile, the Ugandan High Commissioner to the UK Julius Moto commended Nnabagereka for training both the girl and boy child into responsible adults.
Other guests included the Kabaka's Representative in UK and Republic of Ireland Ronald Lutaaya, the deputy Ugandan UK High Commissioner Amb. John Mugerwa and the representative of Emoriror in the UK Michael Okwalinga among others.

The maestro's waltz comes to an end