The Singleton Golf Challenge continued to excite on and off the course as the tournament reached the penultimate stage at Entebbe Club on Saturday.

After Saturday's action, it is Andrew Atuhaire/Geoffrey Orach and Richard Lutwama/Robert Busingye who will play the final after they beat Tim Mwanda/Ssubi Kiwanuka; 4&3 and Samuel Kato/ Charles Odere after the second playoff hole respectively.

But it was Atuhaire/ Orach and Lutwama/Busingye's match that provided the day's drama as it went to a sudden death play-off.

Trailing by two holes after the first five holes, Palm Valley's Lutwama/Busingye had to crawl back but found themselves again having to chase the same number of holes going into the back nine. 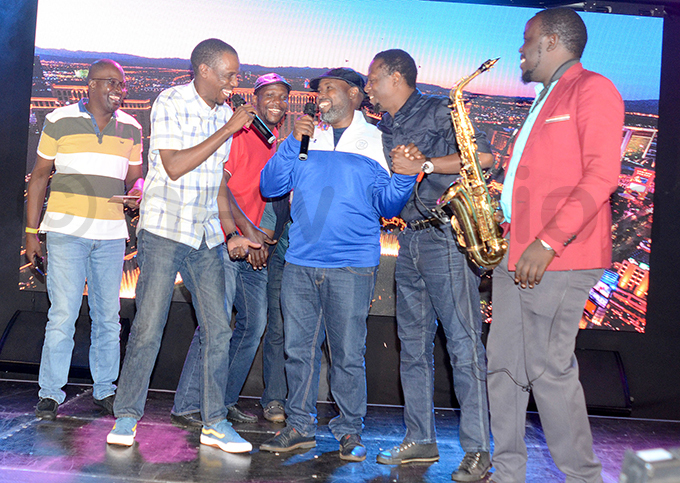 Kiryowa Kiwanuka (2nd left) sings with other golfers after the semi-finals at Entebbe Club. Photo by Michael Nsubuga

Crawl back they did and they should have sealed it on the 18th hole but they missed the advantage and squared the hole to send the match in a sudden death play-off; which they won on the second hole after Samuel Kato missed a two-foot putt that should have sent the game to the third-hole, as pressure mounted.

"It was a tough start we gave up a few chances but we came back and held it till the end. I missed a short putt on the 18th which should have won the match. And the first sudden-death hole was tough with bad tee shorts for both of us," Lutwama said.

"They were tough opponents; Sam is a very long hitter and steady while Charles is very stable on the greens but we kept on encouraging each and didn't squabble even if one played badly. We would like to win this now," he added.

"The play-off pressure was unbelievable but you just need to keep your head down, keep your mind clear and just go for it; hope for the best and trust God," Busingye stated after celebrating with their fans who followed the sudden death play-off.

On the 19th-hole, it was the Singleton Golf Karaoke Buzz that took the golfers by storm as individuals volunteered to mimic their stars off screened lyrics, which emcee Patrick Idringi aka Salvador interrupted with rib cracking jokes.

Former Entebbe Club chairman Kiryowa Kiwanuka's birthday couldn't have happened at a better time as he celebrated it with the club members who sang and danced with him with Afro-soul artiste Kenneth Mugabi's guitar providing the beats.