Gender ministry backs KCCA on handouts to ...
Next Story

Uganda and Denmark to work on food quality

Joy Kabatsi visiting one of the farmers in Denmark

Uganda and Denmark have agreed to come up with a framework that will see an improvement in Ugandan agricultural products for ease of access of the European Union market.

Ugandan chilies and vegetables are facing a ban from the EU market over contamination concerns. Early this year, the EU delegation Ambassador in Uganda, Attilio Pacifici, petitioned the Ministry of Agriculture, Animal Industry and Fisheries, saying pest infestations were on the increase among Ugandan consignments of rose flowers, peppers and soursop, which would lead to a total ban if not addressed.

"The discussions aimed at introducing a partnership framework between Uganda and Denmark through public and private sectors. This will help Uganda to slowly produce products that will be acceptable to access the international market," the statement read in part.

Under the codename, Pan African Development Project (PADP), the project will seek to enlighten Ugandan farmers on the food process chain detailing how food from the farm ends up on the customers' table.

"For instance in Brussels, Uganda has been listed as a country whose chillies have to be stopped if nothing is done to match the required phytosanitary and sanitary provisions." It was observed in the meeting. 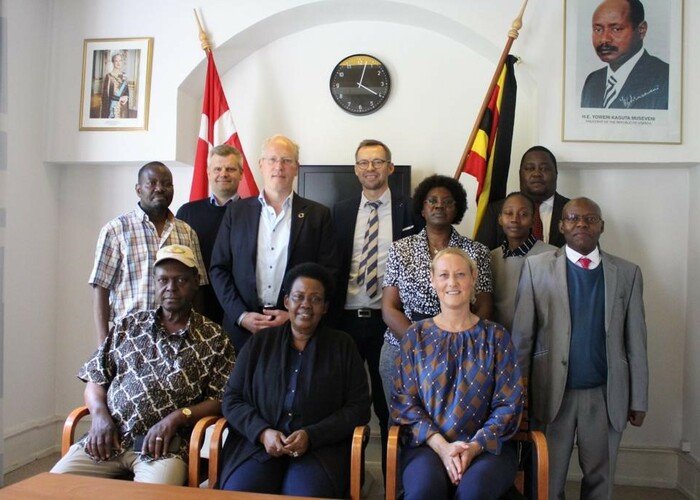 Kabatsi (centre), members of the Copenhagen Mission Team, and organisers of the fair at the embassy

This Ugandan Mission in Copenhagen was tasked to follow up with the Danish Company to access available financing granted as part of the Danish aid programme for the developing world with focus on Africa and East Africa in particular.

"The mechanism will look at the products value chain, different sectors, required inputs and outputs, seeds, nuts, dairy, roots fruits, aquatic, livestock agriculture as all part of nutrition and the overall agriculture set up including labour taking into account the machinery and equipment which also identify quality control measures that overall will address and deliver Uganda to the UN 2030 goal and our own Ugandan NDP 2020/2040."

The Roskilde Agricultural and country fair show is the largest of its kind in Denmark and it is held every year. It's a traditional exhibition of the agriculture industry that has been held since 1969.

The exhibition presents over 1,800 animals, 150 agricultural exhibitors and a variety of other agricultural equipment that any country interested in Agricultural improvement and to learn about agriculture and food production would greatly benefit from.