The deceased has been identified as George William Kasujja, 29 a resident of Buliro-Kibaale village in Kakuuto sub-county.

The deceased has been identified as George William Kasujja, 29 a resident of Buliro-Kibaale village in Kakuuto sub-county.

MURDER        MOB JUSTICE
The Police in Kyotera is holding five suspects for allegedly beating their fellow resident to death.
The incident occurred on Friday in a local bar around 11:00 pm leaving  residents shocked.
The deceased has been identified as George William Kasujja, 29 a resident of Buliro-Kibaale village in Kakuuto sub-county.
It is said that the suspects including Hillary Tukwasibwe (18), Dominick Byabakama (16) plus three others, picked a quarrel with Kasujja which later turned into a brutal fight.
Eyewitnesses told police that they pounced on Kasujja whom they punched, kicked and clubbed with sticks leaving him unconscious.
They said Kasujja lay on the ground bleeding profusely from the nose and mouth. He also sustained deep wounds on the head. The suspects went into hiding after the incident.
Kasujja's family members rushed him to Kakuuto Health Centre IV where he died in the morning at around 6:30am.
However, when information about Kasujja's death reached his colleagues back home, they mobilised a mob which immediately began searching for the suspects to avenge their colleague's death. 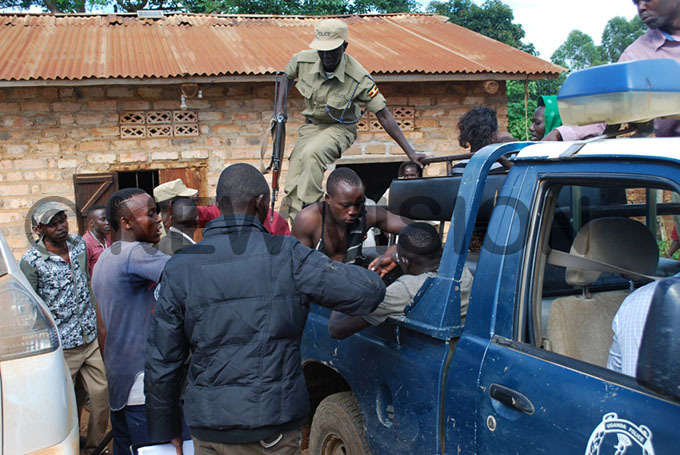 But police detectives learnt about their plot forcing them to join the hunt to save the suspects life.
Tukwasibwe and Byamukama were picked from the jungle while others were picked from different hideouts.
A scuffle ensued as the mob attempted to seize the suspects from the armed police officers to lynch them. They were immediately whisked to Mayanja police post to record statements.
Within no time, angry residents, wielding sticks and stones, stormed the police post demanding for the suspects.
The few officers were forced to call for back up contingency plan as the mob grew bigger and wild.
Efforts by the local leaders to quell them were futile but more armed police officers arrived to contain the situation.
Some of the suspects were taken to Kakuuto police station while others to Kyotera police station.
According to Frank Kibirige, the deceased's brother said he was a humble man who would try his best to avoid trouble being a new resident in the area.
He added that his wife and children were waiting for him to return home in vain.
They got concerned as it clocked 10:00 pm without him returning home only to learn that he had been badly attacked.
A doctor, who carried out a post-mortem, found injuries on the head and other parts of the body. 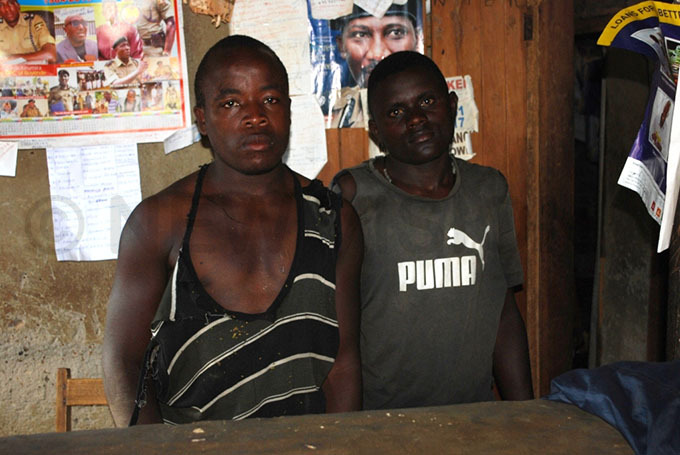 Tukwasibwe (left) and Byamukama at Mayanja police post. (Photo by Davis Buyondo)
Joseph Magembe, the Local Council (LC1) chairperson of Simba village, the neigbouring village explained that youths in the two villages are found of fighting.
Although they are hard working Magembe argues that fighting is still a common vice among them. He further said that local leaders and Police have always held meetings to sound warning against fighting.
Charles Njuba, the Kyotera district vice chairperson, reached the place and engaged several local leaders, elders and youth groups in an effort to quell the protestors.
He appealed to residents to always report matters beyond their control to local leaders or Police for redress.
However, Bibiana Akongo, the Officer in Charge of Criminal Investigations -Kyotera Police, said they are still investigating the matter.
She added that they are to charge the suspects with murder or manslaughter depending on what investigations will confirm.
Police later allowed family members to bury the deceased as investigations continue.

Hollywood takes on Trump at Oscars with message of inclusion