Bishop Obanyi was presiding over the 36th graduation ceremony of St Mbaaga’s Seminary Ggaba, which coincided with its 43rd anniversary.

Bishop Obanyi was presiding over the 36th graduation ceremony of St Mbaaga’s Seminary Ggaba, which coincided with its 43rd anniversary.

KAMPALA - The Bishop of the Roman Catholic Diocese of Kakamega (in Kenya),  the Rt Rev. Joseph Obanyi Sagwe has praised St Mbaaga's Major Seminary, Ggaba, for its enormous contribution to the development of the local clerical institution in Uganda and East Africa.

"A number of dioceses and institutes of consecrated life, here in Uganda, East Africa, and elsewhere in the world, depend on this seminary for the formation of their priests and religious confreres. We acknowledge the efforts of the staff members and we are grateful."

Bishop Obanyi was presiding over the 36th graduation ceremony of St Mbaaga's Seminary Ggaba, which coincided with its 43rd anniversary.

During the function, a total of 42 seminarians, priests and religious men and women graduated with Diplomas and Bachelor's degrees in Philosophy and Theology of the Pontifical Urban University, Rome. 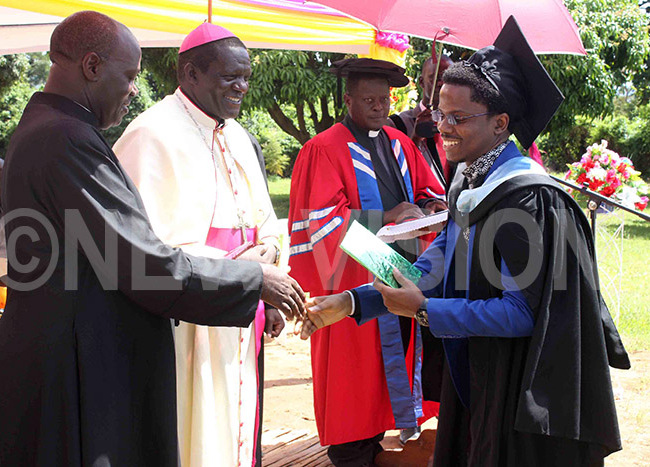 A graduand shares a light moment with Fr Dr Joseph Sserunjoji (left), after receiving his academic documents from Bishop Obanyi (in a white cassock).

In his message to the graduands, Bishop Obanyi, discouraged "academic complacency," which he said, had made many priests and religious men and women to fail in their ministry.

"The academic credentials that you have achieved should not make you aloof. You must remain connected to the people in the communities where you are going to serve. Don't use the knowledge you have acquired to dominate the people. Use it to improve the conditions of the people as you also draw them closer to Jesus, who called you to work in his vineyard."

The Rector of the Seminary, the Rev. Fr Dr. Joseph Serunjoji also asked the graduands to be champions of peace, love and holistic development. He further cautioned them against mischievous behaviours, which could tarnish the image of the Church. 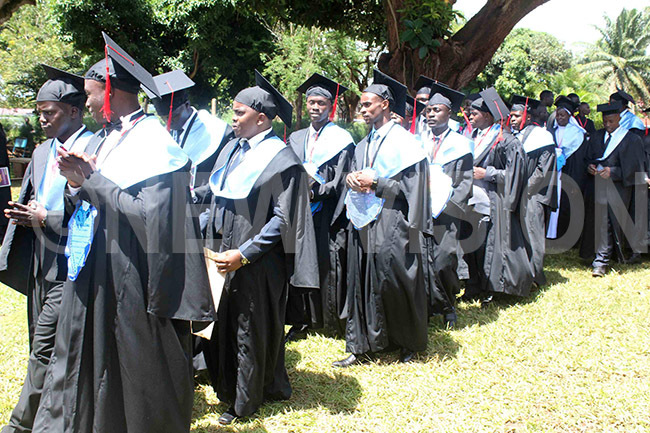 Some of the graduands in procession during the function

During the same function, 35 seminarians, who were cleared to go for their pastoral experience (after completing their fifth year), were prayed for in a special way. The seminary's 17 diaconal candidates also received a special blessing from Bishop Obanyi.