RELIGION
KAMPALA-Muslim Journalists have been cautioned against divisive stories that promote hatred among the Muslim community.
The deputy supreme mufti, Sheikh Mahmood Kibaate, instead advised journalists to focus on the news that unities and promotes peace.
Kibaate made the appeal at an Iftar dinner for Muslim journalists at Taggy Hotel in Kampala on Sunday.
"Write stories that promote peace and unity among the Muslims than focusing on negative stories that keep on dividing us'' Kibaate said.
Such stories affect the development of the Muslim community. 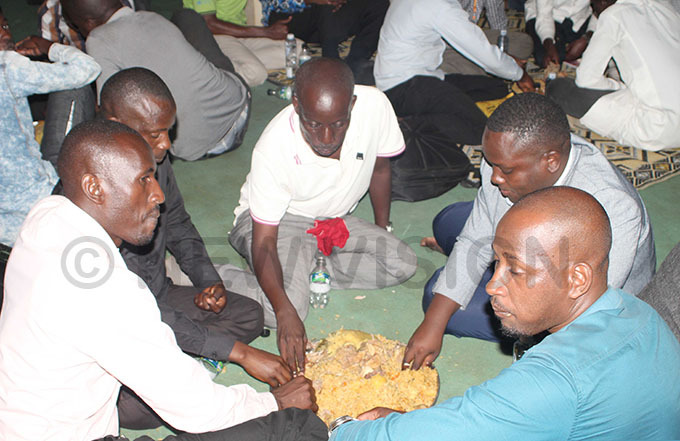 Muslim Journalists share a meal during Iftar dinner at Taggy Hotel. (Photo by Ramadhan Abbey)
He noted that Uganda has over 200 Muslim journalists but few write objectively about Muslims which gives a bad Image even to non-Muslims.
"You have to love your religion and participate in the development of the faith," he said.
The first ever Journalists' Iftar Dinner started at 4:30 pm with Journalists reciting the Quran as a way of giving value to the Month of  Ramadan, preaching the word of Allah and giving them incites about the importance of fasting as well as giving out Zakat especially to needy people.
He advised Journalist s to use their profession to serve the Ummah and use their professional to enter the kingdom of God (Jannah)
At the dinner, the Police Community Liaison Officer, Anatooli Muleterwa called upon media to report objectively by uniting the public instead of dividing the people
‘'Let us develop the country by promoting unity, peace and avoid stories that divided people, adding that we are all Ugandans who want a peaceful country with values‘' Muleterwa said.
He urged Journalists to work with Police to avoid chaos during their time of work and in case of challenges they should follow the law.
He, however, applauded the management for organizing after dinner aimed at bringing together Muslim Journalists. 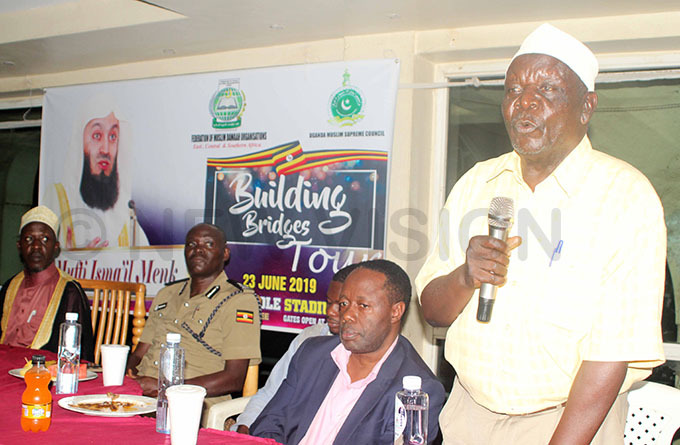 Spokesperson Uganda Muslim Supreme Council (UMSC), Hajji Nsereko Mutumba addressing Journalists during Iftar dinner. ( Photo by Ramadhan Abbey)
Uganda Muslim Supreme Council (UMSC) spokesperson, Hajji Nsereko Mutumba urged Journalists to maintain a high level of discipline if they are to survive in the media professional.
He noted that there are Journalists who do not have discipline.
‘'If you don't have discipline, no media organisation or institution will accommodate hooliganism'' Mutumba said.
Nsereko called upon journalists to join politics and declare their ambitions to stand for various leadership positions including Member of Parliament noting that everybody is supposed to share the national cake.
Nsereko argued reporters to balance their stories and avoid taking sides.
Journalists speak out on joining politics
Khalid Kintu the aspiring Lord Councilor  Kawempe North said there are many things going on in this country yet Journalist have a role to play in decision making. So as a Muslim journalist, I want to contribute to the development of the Ummah.