The ban was pronounced by Bishop Samuel Kaziimba, the supreme chairman of the organising committee of the Church of Uganda function.

The ban was pronounced by Bishop Samuel Kaziimba, the supreme chairman of the organising committee of the Church of Uganda function.

Dr. Daniel Babikwa of NEMA (left) handing over a dustbin to Bishop Samuel Kaziimba (in a cassock) and Bishop Elidard Nsubuga (right), during the launching of the campaign against polythene bags (kaveera) at Namugongo Anglican Martyrs Shrine. PHOTO: Mathias Mazinga
Just a few weeks since the Catholic Bishops launched a campaign against the use of polythene bags at Namugongo Catholic Martyrs Shrine, the Anglicans Bishops have also taken a similar decision.
They have prohibited the pilgrims from carrying polythene bags (single-use plastics commonly known as kaveera) to the Anglican Martyrs Shrine, Namugongo, on Martyrs Day. The ban was pronounced by Bishop Samuel Kaziimba, the supreme chairman of the organising committee of the Church of Uganda function.
"We have taken this option in order to protect our environment. Kaveera can be seen as convenient, but it has disastrous effects on the environment and human health. It takes decades to decompose. Researchers have also associated it with non-communicable diseases like cancer and diabetes," Bishop Kaziimba said. 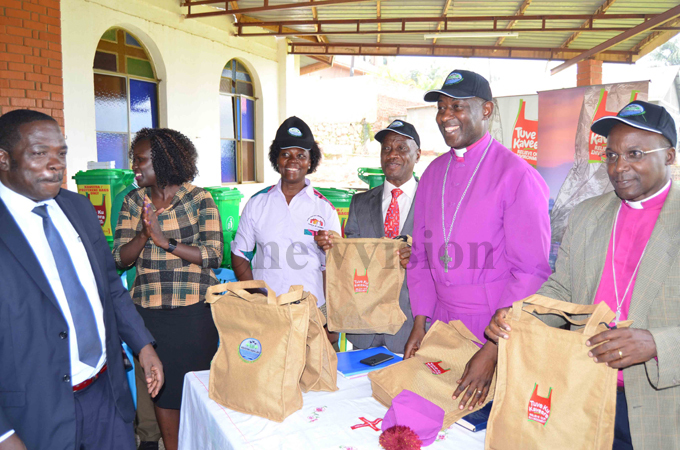 "Our decision to ban kaveera from the shrine and its premises is in response to the global concerns about the environmental and health effects attached to it. We shall sustain this campaign, which we hope will help us to reduce environmental destruction. I urge the pilgrims to respect the ban. We must remember that this world is not going to end with us. So, we must leave it safe for our children and grandchildren."
Kaziimba declared the ban during a press conference at the Anglican Martyrs Shrine in Namugongo, together with representatives from partner organisations namely NEMA, Vivo Energy, Coca Cola, Caritas, and Next Media.
Kaziimba advised the pilgrims to carry their items in reusable bags and to also put their garbage in dustbins that will be available at the shrine.
Dr. Daniel Wabikwa, who represented NEMA, asked Ugandans to stop what he called the "blame game" about polythene bags. 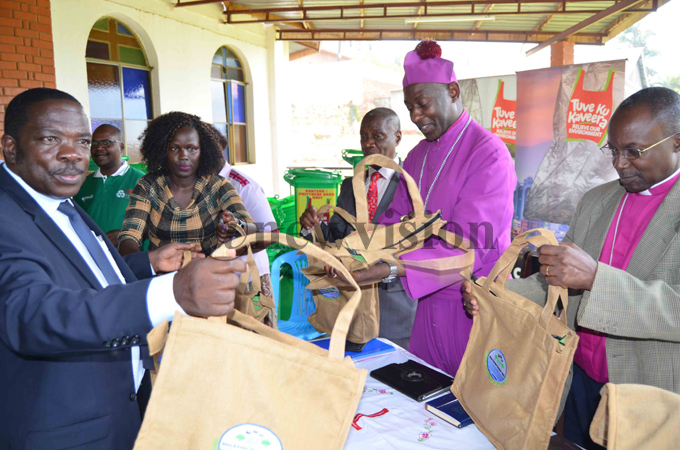 L-R: Dr. Wabikwa, Pamela Adongo, Dr. Gaster Ntake, Bishop Kaziimba, and Bishop Elidard Nsubuga admire the reusable bags that were donated to the shrine for the pilgrims to use.

"We must not point fingers at each other. Let's instead take a commitment to stop the culture of using kaveera. The responsibility to stop the use of kaveera starts with you and me."
Pamela Adongo, who represented Next Media, said countries such as Rwanda and Kenya had successfully implemented the ban, which was why Ugandans should have the hope that the country can also be free of polythene bags. She also appealed to the manufactures and business people to be supportive of the campaign.
During the function, Edward Ivan Kalenzi handed over 95 dustbins that Coca Cola donated to the shrine.
The function was also graced by the Police Commander of Kampala Metropolitan East, SSP Michael Musoni Sabila.

Chiinji sings of forgiveness in love

Extra Musica on the Easter menu