World Cup organisers happy with security a...
Next Story

Proline players and fans could not hide their excitement as their side won their first major silverware in 13 years.
Proline beat Bright Stars 5-4 on penalties after a 1-1 draw in the finals of the Stanbic Uganda Cup at Masaka Recreation Ground on Saturday to claim the cup and sh40m prize money.
This followed their earlier triumph, a week ago in the Big League which they won to gain promotion back to the Uganda Premier League.
Despite not scoring in the final, Proline striker Ivan Bogere, a former Buwekula County and Kakiri Town Council player was as overjoyed as the rest of the team members.
"On my side, I think it means a lot more than anyone else because it has been a long journey for me; because I lost last year's Masaza Cup at the semi-finals where I finished as the second top scorer. But I was the top scorer of the Big League and we won the trophy, now when you add this, it is really big for me," Bogere said.
"I have only been watching others celebrate winning this on TV but after all the hard work;  that I'm also here means God has answered my prayers.
"I have always dreamt of playing in the premier league, so I'm going to continue working hard, contest for the golden boot and like any other player, I would also like to play for the Cranes and it is one of my dreams," Bogere who has featured for Proline for one season stated.
Proline defender Mustafa Mujuzi who scooped the MVP and top scorers' award also revealed in the aftermath of the Uganda Cup Victory. 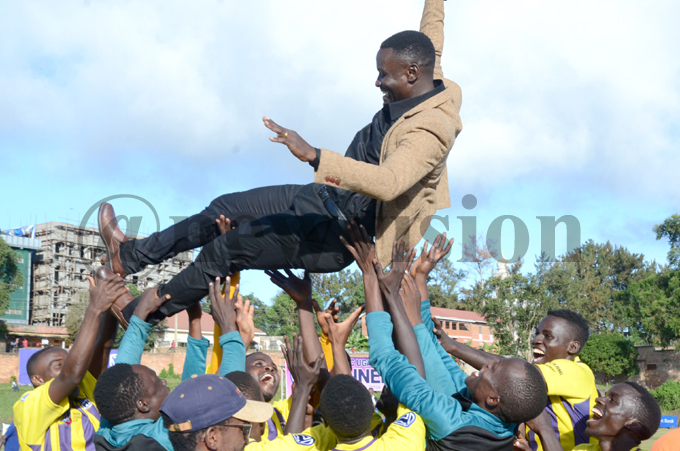 "I'm feeling good and we expected it because of the players, the management were all focused on winning this cup. My two awards are also very good but we had to fight to return to the top flight first and we are going to work hard to ensure we are not relegated again," Mujuzi stated.
"We all feel good because we have made history as the first set of players to win the Uganda Cup for the team. We have worked as a team, listened to our coaches so we expected this victory because we have come a long way," FUFA Big League MVP Bright Anukani added.
Team captain Noordin Bunjo said they expected to win because of the good run they have had in the tournament where they eliminated UPL sides Onduparaka and Vipers on the way to Masaka.
Fans reactions
Ramanzan Magala - I want to thank God for listening to our prayers and winning both the Big League and the Uganda Cup. The players have also worked hard and I thank them. I'm super excited. The boys have won many crucial games en-route to this.
Bernard Katumba - I came all the way from Wandegeya expecting Proline to win. We eliminated Onduparaka buried Vipers so Bright Stars were never going to be a problem. This victory has not come by chance and now everyone should give Proline the respect they deserve.
Justus Bisigirwa - Proline plays very well and it is the reason they are champions. So I expect them to represent us well even on the continent. I expected them to win because they have had a good run in the competition and I would like to thank the director Mujib Kasule for putting the team together.
Joan Nassazi - I'm extremely overjoyed for this victory and I really expected it because the moment they eliminated the holder's Vipers, I knew they could make it. I want to thank God and Mujib Kasule for funding the team.

Mwisho And Tapuwa May Soon Explode