Kadaga castigates the executive for not im...
Next Story

The experts from various parts of the world, say something needs to be done to apprehend the culprits.

The experts from various parts of the world, say something needs to be done to apprehend the culprits.

Different human rights experts have expressed concern over the new increasing forms of sexual violence in conflict areas.
The experts from various parts of the world, say something needs to be done to apprehend the culprits.
They cited military personnel, peacekeeping missions, and rebels groups as the key perpetrators.
This was revealed during a symposium under the topic; "Sexual Violence-Advancing the Agenda", at Speke Resort Munyonyo in Kampala on Tuesday.
The event was organised by the Refugee Law Project (RLP) School of Law, Makerere University and School of Global Studies, University of Gothenburg, funded by the Swedish Research Council and Riksbankens Jubileumsfond.
The event was also attended by refugee experts, researchers, and academia from Canada, United States, Kenya, DR Congo, and Britain among others.
The programme manager gender and sexuality RLP, David  Onen said through their interactions with refugees, they have managed to record new forms of sexual violence. 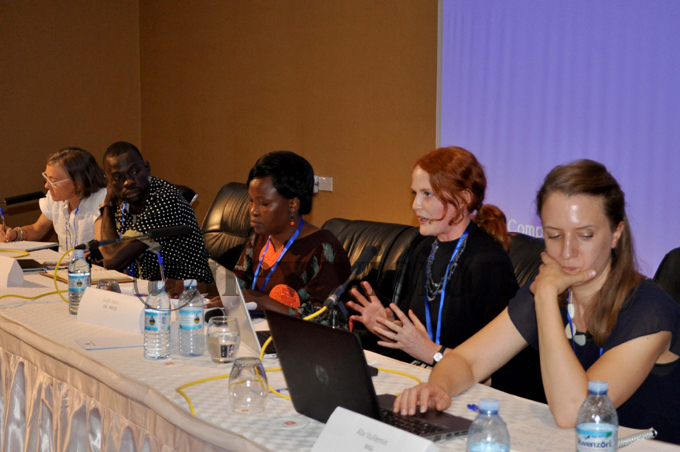 He cited a female refugee from South Sudan who was allegedly undressed, made to lie on her back and the perpetrators smeared simsim seeds in her private parts and later freed chicken to feed on her.
He said another case was of Burundian man who was allegedly tied and the perpetrators cut off the fore skin of his penis, poured salt around it, and unconfined goats to leak it.
"Even getting these people to give stories in these camps is a challenge. There are no safe rooms to interview them in the settlements. We have integrated the refugee leadership and host community that enables victims to report freely and respond to the cases in time," he said.
The RLP director, Dr. Chris Dolan said there need to understand the effects of sexual violence, away from the immediate target victims.
He said research shows that sexual violence is one of the big reasons why people become refugees.
Dolan said the newest forms of violence recorded, happened in the countries of origin like among the South Sudanese (SS) refugees and other few cases happen in the refugee camps.
He noted that a study shows that one out every five SS refugee women have experienced rape in settlements and one out of 20 amongst men.
"But we know very few men talk about it," he added.
He added that perpetrators of sexual violence amongst men are military (rebel and national).
"They do it through rape. At times they target the genitalia; in some cases, men's testicles are tied up with ropes or beaten with sticks," he explained.
Improve medical support in settlements
Dolan said medical support in refugee settlements is not enough to deal with injuries inflicted as a result of sexual violence.
"There is a need for more support for refugees to be properly examined by medics who understand sexual violence and the different forms to easily recommend appropriate referrals where such cases can be handled," he added.
Donan said RLP identifies cases and refer the victims to St.Mary's Laco hospital in Gulu.
Thomas Charman,  from the University of Edinburgh Edinburg, said it not enough for the world to acknowledge that sexual violence exists alone.
He said there is a need to take action to protect and advocate for all.
Dr. Sylvester Onzivua, a consultant with Mulago National Referral Hospital, noted that Uganda's penal code does not capture the examination of male survivors of sexual violence.
"Our environment makes it difficult for male survivors of sexual violence to come out. There is a need to define all these new forms of violence for them to be well responded to," he noted.
Heather Tasker, from York University,  said many sexual violence cases are committed by the peace keepers in different missions especially in Congo.
"Peacekeeping missions connect with conflict related sexual violence. But why are peace keepers excluded from prosecution by host countries when they commit sexual violence?" she asked.
Tasker said there is need for the International Criminal Court to hold the perpetrators accountable for justice to prevail. End