Kukundakwe in action before she left for Singapore. PHOTOS: Michael Nsubuga

Uganda para-swimmer Husnah Kukundakwe's classification classes were confirmed after she competed in the World Para-Swimming World Series 2019 in Singapore last week.
Kukundakwe currently competes in the S9 (freestyle, butterfly, and backstroke), SB8 (breaststroke) and SM9 (Individual Medley) which was due for review at the championship.
All these were confirmed at the championship where the 12-year-old managed to collect some points in all the four events although she could not make it to the finals.
There are ten different sport classes for athletes with physical impairment, numbered 1-10. A lower number indicates a more severe activity limitation than a higher number.
Swimmers with different disabilities swam in the same events with their results compared against the world records in their respective classifications for point allocation.
She got 229 points from the 100m Freestyle where she clocked 1:30.43; 53 points from the  100m Backstroke (1:52.80) and 239 and 296 points from the 100m Breaststroke and the 50m Freestyle races (1:57.84 & 40.24) respectively. 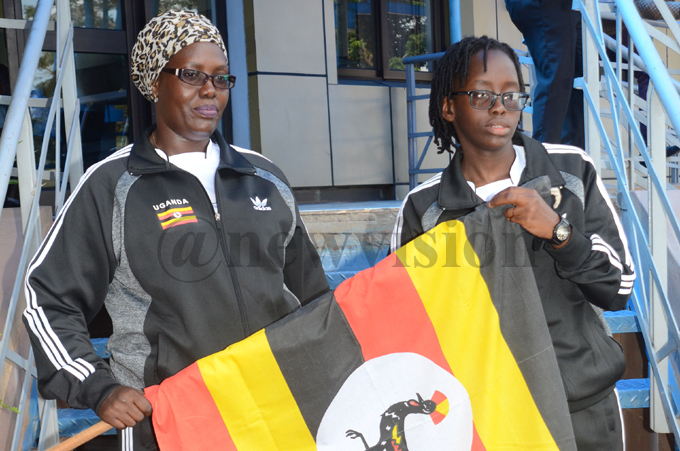 Batamuriza and Kukundakwe before they left for Singapore. PHOTO: Michael Nsubuga

"Basically Singapore was fine and to us, it was a learning process because I learned a lot regarding para swimming. When we were going we thought the competition was going to be according to classification classes but it wasn't," Hashima Batamuriza, her manager/mum said.
"Competing without a coach was the biggest challenge. I would wake up in the morning not knowing what exactly would be next, whereas other swimmers would train in the morning with their coaches.
"For Husnah, it was different because she would just go in the pool and do what she felt was easy for her. The Lack of labeled country uniforms was also another challenge because we would first explain ourselves to the security on a daily basis,"
"Despite the challenges, Kukundakwe managed personal bests in all the races, being her first time in a big international event, so to me as a manager, she did a wonderful job.
"And we came back with new strategies to communicate to the coach to make a difference in her training for her to achieve big in the World Championship in London in September," Batamuriza stated.
Kukundakwe's travel was made possible by the Uganda Paralympic Committee, Centenary Bank, Stanbic Bank, National Drug Authority, through fundraising and the Uganda National Bureau of Standards and NCS who offered an air ticket each.

Media urged to give more coverage on women issues

Women remain an untapped gold mine for media houses