Bucket farming, a solution to limited space
Next Story

Bitwire (right) shows a friend how the mushroom drier works at her home in Bugabo village in Wakiso district. Photos by Gladys Kalibbala

Jessica Bitwire, a teacher by profession and proprietor of JB International is known by many as the ‘mushroom lady', a preacher, counselor, farmer, and nutritionist.

She says it's the reason she dropped the chalk because of meagre salary, realizing that it could not lead her to the retirement lifestyle she wanted. "I always dreamt of living a comfortable life in my old age and the little money I earned from the classroom could not provide for it," she explains.

As a young girl, her other name was Kyoshabire (meaning whatever you ask from God, he will give it to you) which she says has been the case with her after committing her life to God.

Her trust in God starts way back in her family where her follower (sibling) came after her mother prayed for over eight years. 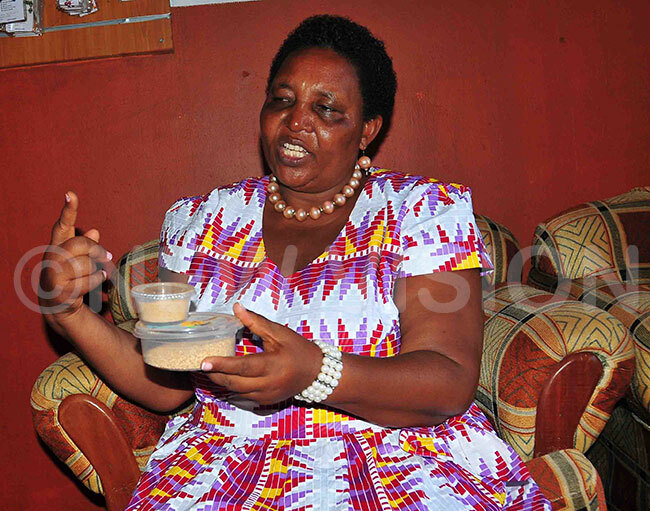 Bitwire explains how to use mushroom powder to make soup

"Mum believed that God would listen to her prayers for more children and her prayers were answered," she says.

Bitwire started studying at Kikungiri Primary School and after her Primary Leaving Examination (PLE) her father wanted her to join a Teacher Training Colleges (TTC) while she preferred a nursing course.

In the end, her father won and she joined Kabale TTC in 1975 although, she says, due to her good PLE results, she had been invited to join Maryhill Girls Secondary School but her parents could not afford the school fees.

During her second year at the TTC, she met Benon Bitwire who was by then a student at the Institute of Teachers' Education Kyambogo (ITEK) before it turned into a University. 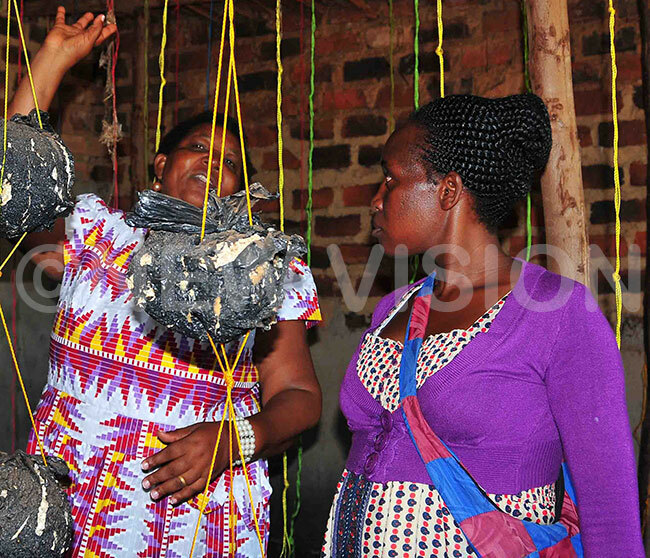 Bitwire shows a friend some of her mushroom gardens

At the end of her course, she was among the first lot in her Parish at Rubango. The two got married in 1979, the same year she completed her teaching course.

She was later appointed headteacher at Garubunda Primary School in Rukungiri district before she quitted in 1973.

She also reared goats. "After a few months of concentration, I started selling between 20 and 40 goats a month at the village markets. Farmers were coming all the way from Masaka to buy my onion and peas while I was harvesting tonnes of maize," she boasts.

At the same time, she owned a Photo Studio (JB Wedding Centre), a bakery and also sold second-hand clothes where all her children and their father got involved.

Bitwire said she achieved all this because she had all the time to concentrate on her farming after resigning from teaching.

She also started mushroom farming which has turned into a bigger enterprise known as JB International.

Eventually, with enough money to hire a farm manager to look after her gardens in the village, she went to the South African College of Complementary Therapies for a three-year course and later in 2007 joined Nkumba University where she graduated with a bachelors degree in Public Administration and Management. By that time the family had shifted to their present home at Bugabo village in Wakiso district. 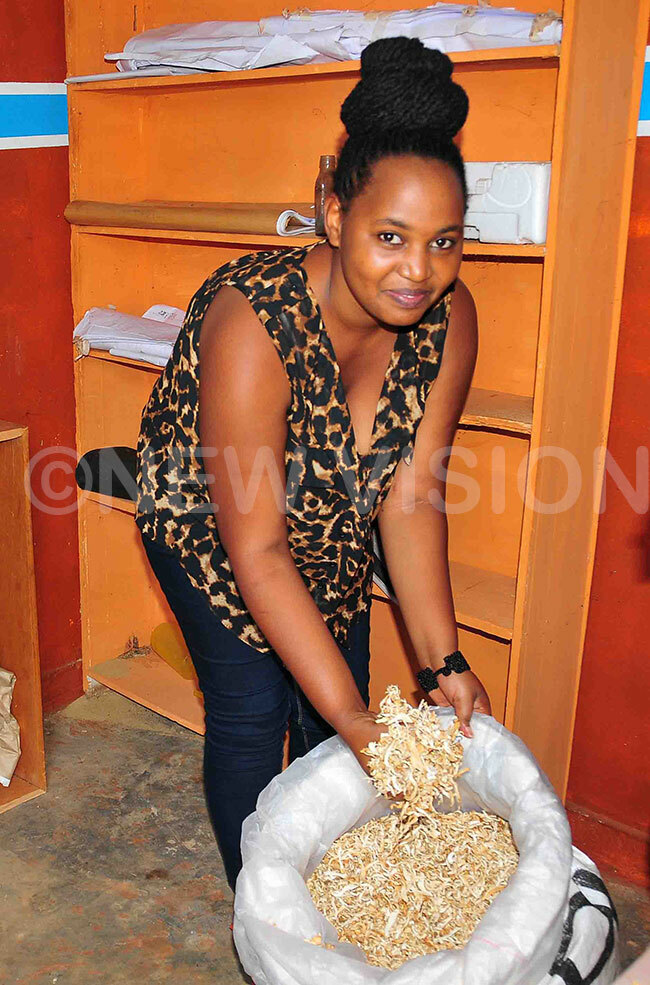 Bitwire says, getting involved in many ventures as a talented entrepreneur, prepared her well to identify what she can settle on during her retirement.

"Without sampling many areas, you may fail to get comparisons as to which is better than the other," she says.

Finally, she settled for mushroom farming, poultry and cattle keeping at the family farm in Kisenja village, Kakumiro District.

Bitwire's company JB International has so far been able to create employment for 16 youths including three from West Nile, six from Entebbe, four from Mubende, Bulambuli one.

As a nutritionist, Bitwire explains that mushrooms are low in fat yet high in lean protein, making it a perfect food for a healthy heart.

She further explains how mushrooms have many health benefits as they slow down the growth of cancer cells, TB and it boosts immunity.

"Mushroom crystals can be added in sauce like beans, g-nuts, beef as well as chicken. It can also be used to produce red wine (when fermenting, mushroom powder is used instead of sorghum),"  she said. She adds that in HIV patients, it helps to raise CD4 count while it reduces the viral load.

What others say about Bitwire

When Martin completed his ‘A' level education in 2016 at Bright Future SS, Bwebajja, he made a decision to join farming.

"I decided to utilize the family land with assistance from my parents and I have never regretted," he explained.

He had been working in this garden for a few weeks during the holidays but after the final exams, he had a long holiday to work. When the watermelons he had planted matured, he started selling them at Kakumiro Divine Supermarket.

"When my elder brother wanted to venture into piggery, I took up the work of constructing all the structures and I pocketed that money," he boasts. 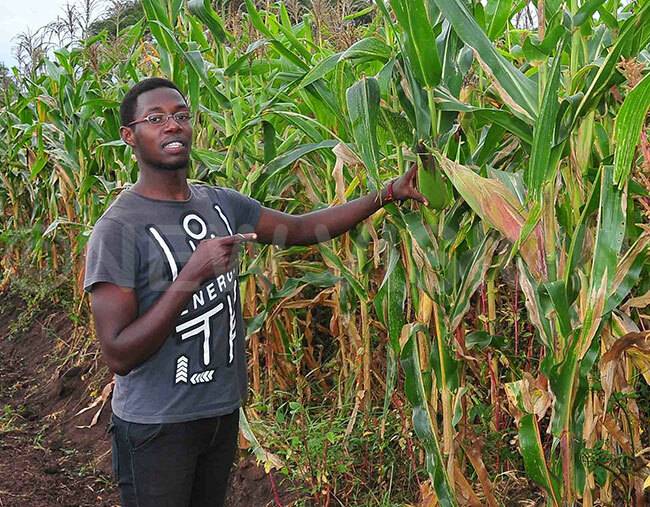 Martin shows the maize he planted at the farm in Kakumiro

Martin built the goats' house and fenced off two acres with the chain-link.

From the money he was paid for working at the farm, he bought his own pigs and is ready to increase on the number and take on this business seriously.

At his parent's home in Bugabo village near Entebbe, Martin and his sister work together with their parents in the mushroom project.

"It's high time my fellow youth realise that farming is a source of income and should stop undermining it," he says.

Martin praises the mother for showing them the right way as he explains that none of his siblings thinks of asking for money from their parents without getting involved in the work done at home.

"In fact, mum told us that it's time for her to retire but she expects all of us to continue running these projects as she supervises once in a while," he explained.

Need a good back? Mind your Sleeping position

Sitting at the edge of your grave?

I refused to go home and die - Nalubowa

I refused to go home and die - Nalubowa