One in seven babies born with low birthwei...
Next Story

The President said they have identified 13 projects including Boda Boda groups.

The President said they have identified 13 projects including Boda Boda groups.

Museveni visits stalls set up by some of the trainees who completed three months' courses in various fields. PHOTOS: PPU
President Yoweri Museveni has said the government is considering introducing project centered SACCOs to support grass-roots initiatives aimed at creating jobs and improving incomes for the rural poor.
"We have experimented this in Kasandha and realized that if we encouraged wanaichi to join SACCOs that promote their interests, it would be easier for government to channel money in those respective SACCOs for easy access for them to boost their projects," he said.
The President said they have identified 13 projects including Boda Boda groups, Women entrepreneurs, carpentry, saloons, taxi operators, restaurants, welders, market vendors, youth leaders, people with disabilities, produce dealers, mechanics, and tailors. He said the proposal has already been introduced to the cabinet.
He was addressing a public rally at Kyatiri Primary School grounds in Pakanyi sub-county, Buruli county in Masindi district on Wednesday. Some of the trainees at the President's rally

The President who is currently on a nation-wide tour to promote governments programs to create jobs and wealth through sustainable cost-effective agro commercial projects was yesterday speaking at a graduation ceremony of 884 students who had completed six months of comprehensive training in the fields of tailoring, hairdressing, catering among others.
"My message is to mobilise people to wake up and say no to poverty at household level so that it is embraced by everyone. I have come here today to confirm what the youths and others do appreciate my countrywide campaign against poverty eradication at the household level in the country. With this spirit and vigor, let's take off in all aspects of creating a source of income for everyone", he said.
He listened to the youth trainees from St Kizito Vocational and Friendship Centre in Masindi district who gave testimonies and revelations at a public rally that they can make money after being trained on skilling.
While addressing thousands of wanainchi who turned up for the rally, President Museveni emphasized that the people on small land holdings should stick to simple but profitable and commercial agricultural enterprises based on a four-acre plan following government guidance initiated in 1997 including coffee, fruits, food crops to sustain the family, poultry, piggery, Mushrooms, fish ponds that do not require a big piece of land, etc. 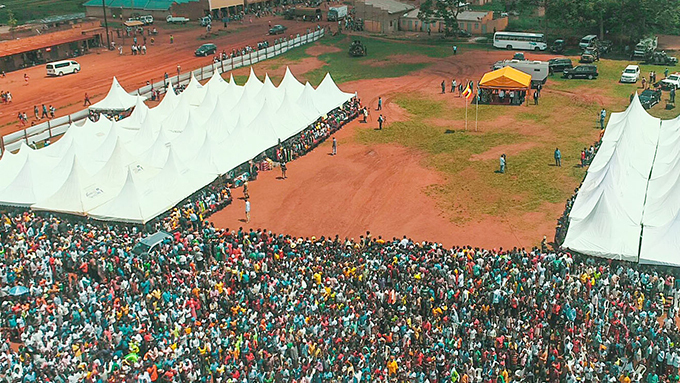 "This is to ensure that everyone is engaged in the war against poverty. We should not have spectators in this struggle, he said.
He, however, added that those on big pieces of land in Masindi district and other areas can grow maize, tobacco, or even cattle keeping on a large.
The Director of St. Kizito Vocational and Friendship Centre Agnes Nakazibwe said that the institution that started in 2007 has trained about 3380 graduates who are in gainful employment.
"The center trains for perfection in all skills believes in quality and encourages the youths that wealth gives improved and good health standards for people," she said.

Woman arrested for dumping baby in a latrine