Karuma power dam to be ready in December

In an interview, the project deputy manager Li Ji said more than 95 percent of the job has been done.

In an interview, the project deputy manager Li Ji said more than 95 percent of the job has been done.

Putting final touches on Karuma Dam. PHOTOS: Titus Kakembo
Sinohydro, the company constructing the 600mw Karuma Dam, valued at $1.7b, is working round the clock to beat the December 2019 deadline and handover the project to the government.
In an interview, the project deputy manager Li Ji said more than 95 percent of the job has been done.
"Consequently, 2,000 of the 6,000 Uganda workers have been laid off with their benefits," said Ji. "Soon the scene at Karuma Bridge will be different from what passersby are used to as 90 percent of the water will switch paths to power the six turbines due to generate electricity."
A tour of the site was a revelation of rocks being piled to create barriers and a spillway with 16 gates which can be opened to control water flow.
Residential buildings for the staff of the dam are giving Karuma trading center a new crop of residents with professionals replacing the peasant farmers and petty traders. The fishing community in the neighborhood has been warned to stay away from the waters or risk danger. 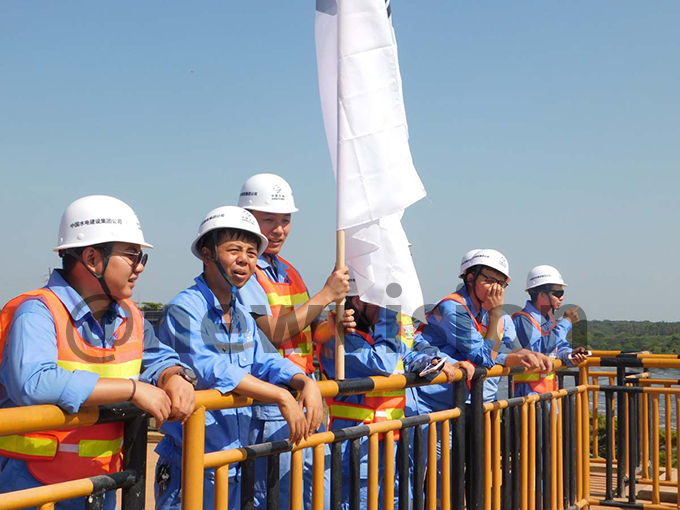 Construction workers at the dam

Talking about the cracks noticed way back in 2016, Ji put the blame on climate change effects and temperature in the atmosphere.
"The issue has since been addressed and everything is in tip-top shape on the spillway and the entire project," said Ji. "We work under the observation of staff from Uganda Electricity Generation Company."
Neighbouring areas are also transforming as poultry farmers, cereals suppliers and fabrics dealers are getting a ready market.
Tourists, some of who are relatives of more than 700 workers on the dam from China are seen destined to Murchison Falls National Park when (MFNP.)
"There are art galleries, restaurants, and supermarkets expected to open to the public and serve their needs," revealed Mark Muhwezi a Sinohydro ICT expert. "The laid-off workers took home a lot more than the monetary benefits. For example, the skills attained and work ethics that prioritize: efficiency, hard work, and delivery in time are priceless."
"They love eating the organic fruits, seeing the wildlife and the Murchison waterfalls while here," said Ji. "In future, Uganda should expect some of the annual 74 million Chinese travelers, who go to different parts of the world, given the variety of attractions to interest visitors available."
Uganda Tourism Board CEO Lilly Ajarova agrees that it is through marketing  Uganda, that numbers of tourists from China to Uganda will shoot up.
"All we need is a better infrastructure to contain huge numbers as some travel in bulk," said Ajarova. "Besides mammals and geographic bodies, Uganda has cultural and faith-based products that can appeal to that market."

Seychelles: One of the most favourite tourist spots