Known as the Protecting Remote Infants by SMS (PRISMS) the app is currently being used in Bwizibwera HCIV where midwives use phones to get a diagnosis.

Known as the Protecting Remote Infants by SMS (PRISMS) the app is currently being used in Bwizibwera HCIV where midwives use phones to get a diagnosis.

MBARARA - Midwives at Bwizibwera Health Center IV in Mbarara district are finding it easy to diagnose diseases in babies aged 0-28 days through using a mobile application developed by Ugandan scientists.

Known as the Protecting Remote Infants by SMS (PRISMS), the app is currently being used in Bwizibwera HCIV where midwives use phones to get a diagnosis.

The phone application was invented in 2013 to empower frontline health workers such as midwives, nurses, birth attendants with knowledge and information on how to handle neonatal heath cases.

In Uganda, the death rate in newborn babies (0-28 days) is still high, with a Ministry of Health reports indicating that Uganda's neonatal mortality rate is at approximately 29 deaths per 1,000 live births.

According to Trifonia Atukunda, a midwife at Bwizibwera, the app was introduced three years ago and has been a game changer in the management of diseases in infants. 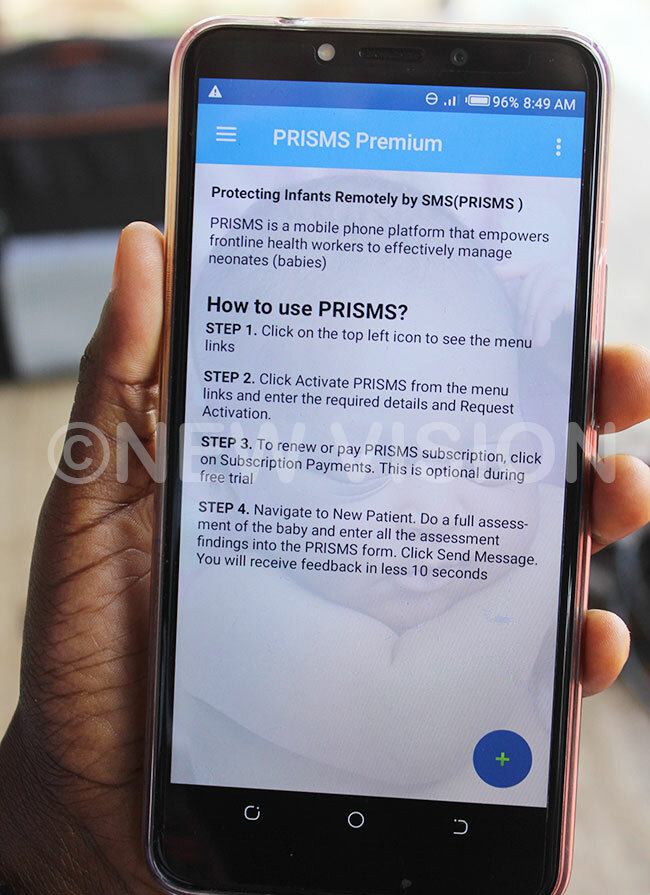 "We are privileged to have this app in place. It helps us manage sick babies. At first, we were referring all the babies but now with the app, we are able to work on the majority of the babies. We only refer cases that we are unable to handle," Atukunda.

According to WHO the first four weeks of life - the neonatal period - represent the most vulnerable time for a child's survival,

Dinah Ndyamuhaki says the app is good for rural health workers where health experts are not readily available.

"Many of our infants could be dying due to lack of immediate attention to some of the small ailments that affect them and yet the midwives can handle them with the right information," Ndyamuhaki says.

She explains that the app comes with a form where a health worker enters all the findings including a sick baby age, weight, degree of jaundice and heart rate, among other essential details.

"After carrying out the examination, you feed the results into the app, and within a few minutes, you get a response on how to manage the case," Ndyamuhaki says.

The app also directs you on how to how to treat the child and do more tests or if you need to refer.

Dr. Peter Sebutinde, the Mbarara District Health Officer (DHO) says the app was meant to solve the problem of the limited number of specialist doctors like pediatricians and neonatologists who are specialized enough to manage sick neonates.

"This app works in a way that these symptoms and signs are fed into the app. The information is then sent to a server, which in turn, in the form of SMS, responds with steps a health worker should take to treat the patient," Sebutinde says.

He reveals that the instructions match those pediatricians or neonatologist would have provided, developers say.

The app also keeps records for future reference. It also empowers low cadre with PRISMS who are inadequately trained to manage sick newborns.

"This was a wonderful innovation that has enabled midwives to make informed decisions and save lives many babies by acting fast on them," Sebutinde says.

Since the app was deployed at Bwizibwera HCIV in 2016, it has led to at least a 30% reduction of infant mortality, Sebutinde said without giving the exact number of the reduction. Dinah Ndyamuhaki demonstrating how to use the app

"Our appeal is that this app be popularized and embraced by midwives and other health facilities so that they can innovatively use this app to aid referrals and reduce infant mortality incidences," Sebutinde says

Health service delivery is no longer about the doctor, midwife or everyone.

Sebutinde explains that due to a limited number of health workers to attend to these health cases, especially in rural areas where there are few pediatricians and limited resources, a group of health researchers from Mbarara University of Science and Technology (MUST) decided to come up with this mobile application in 2013.

"When we first thought about it, we didn't expect to get this massive impact, but I'm happy it is doing wonders," Sebutinde says.

The health researcher behind the app including Dr. Data Santorino, Dr. Francis Bajunirwe and Martin Mukama under CAMtech invented Prisms.

According to Mukama, Bwizibwera which never used to admit neonates is currently admitting and managing them.

"In most facilities, where we work, there're no pediatricians but with this app, many babies are saved," Mukama says.

Before the app was introduced midwives were trained on how to use the app which will in future be rolled in other facilities through the ministry of health.

The minister for state in-charge of Primary Health Care, Joyce Uganda is on the trajectory of improving maternal and neonatal health and with such innovation, it will be better.

"If we have science innovations that are improving the health service delivery as a ministry and government, we are more than willing to support them. I would call upon more people to come up with such innovations," Moriku says.

The Bwizibwera HCIV Deputy Incharge, Evarista Tumushabe says despite the breakthrough by the app, Atukunda says there is a need to streamline neonatal care at the health facility.

"We still lack enough space where to handle sick children and their mothers, they are always put together with the rest of the patients in the only ward we have, which is sometimes is dangerous," Tumushabe says.

The midwives and other health workers credited the application for improving their knowledge through recalling of management practices.