The General Court Martial is today (Monday) slated to deliver judgement in the case in which BodaBoda 2010 patron Hajji Abdullah Kitatta and nine others are battling charges of unlawful possession of firearms, ammunition and military gear.

The offences attract a non-mandatory sentence of death on conviction.

The case is being presided over by a seven-member panel led by Lt Gen Andrew Gutti.

During the trial, the state prosecutor, Lt Col Raphael Mugisha asked the court to find the accused guilty, submitting that the four witnesses have proved all the necessary ingredients of the offences against Kitatta and nine others to warrant a conviction.

The witnesses testified that they were among security officers who arrested Kitatta from Vine Tea Hotel in Wakaliga and he was found with a gold-coated pistol, SMG rifle and 55 rounds of ammunition.

The witnesses further testified that they went to the offices of BodaBoda 2010 at Lubaga and recovered military uniforms and caps, which prosecution maintains are a monopoly of the defence forces. The items were exhibited in court as evidence.

On the other hand, the defence lawyers led by Shaban Sanywa pleaded with the court to acquit Kitatta, arguing that the charges were trumped-up by the state to keep him out of society. 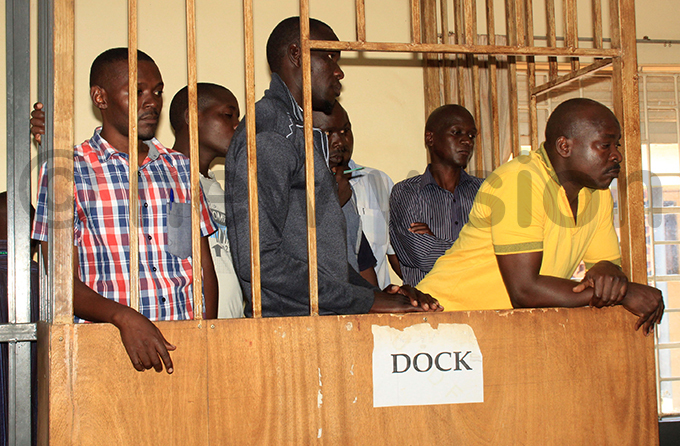 Kitatta and some of the co-defendants during a court appearance in November last year. File Photo

"The accused were framed in order to get rid of them from the society, particularly Kitatta who was alleged as ‘untouchable in Parliament' for questioning Gen. Kale Kayihura," he submitted.

Kayihura, the former Inspector General of Police (IGP) and other Police officers are battling three counts, which include two of failure to protect war materials and one of aiding the kidnap and illegal repatriation of Rwandan nationals before the same court.

Sanywa also submitted that prosecution has failed to prove that Kitatta was in possession of the gold-coated pistol because they have failed to disclose the person who searched and recovered it from him.

"This was an act of bad faith and creates a presumption that Kitatta was not in its possession," he submitted.

The prosecution alleges that on January 21, 2018, in Wakaliga, Rubaga division, Kitatta, Sowali Ngobi and Ibrahim Sekajja were found in unlawful possession of a submachine gun (SMG) rifle and a pistol, contrary to provisions of the Fire Arms Act.

They are also accused of unlawfully possessing 50 rounds of ammunition and military equipment, which are a monopoly of the defence forces.

Apart from Ngobi who is a Police officer, the rest are BodaBoda 2010 members.