Muntu spills on how he has evaded Police
Next Story

Mukulu's ruling on charges for August 30

Justice Eva Luswata adjourned the matter to allow the defence lawyers to make a reply to the Prosecution's submissions on the confirmation of the charges against the accused.

Leader of the Allied Democratic Forces, Jamil Mukulu attends court with other suspects at the High Court in Kampala, May 10, 2019. PhotoS by Kennedy Oryema

Justice Eva Luswata adjourned the matter to allow the defence lawyers to make a reply to the Prosecution's submissions on the confirmation of the charges against the accused.

KAMPALA - The International Crimes Division (ICD) Court will on August 30, deliver a ruling in a case in which the former Allied Democratic Forces (ADF) rebel leader Jamil Mukulu and 37 others are battling several counts of murder and terrorism.

Justice Eva Luswata on Thursday adjourned the matter until then to allow the defence lawyers led by Caleb Alaka to make a reply to the Prosecution's submissions on the confirmation of the charges against the accused.

"I expected to close the pre-trial hearing session today but it was not possible. However, in the interest of justice, I will allow defence lawyers more time to file their submissions before I deliver my ruling," she said.

The defence lawyers are Wandera Ogalo, Nsubuga Mubiru, Caleb Alaka, Evans Ochieng, Asuman Basalirwa, Luyimbaazi Nalukoola, and Musa Bbaale. They were supposed to file their reply by April 27 but in vain.

Procedurally, if charges are confirmed, the pre-trial judge commits the case for trial before a panel of three justices, who conduct the subsequent phase of the proceedings.

She has consequently adjourned the matter until August 30.

The accused are battling different charges including the murder of a number of Muslim clerics and police officers particularly in Eastern Uganda between 2002 and 2015. 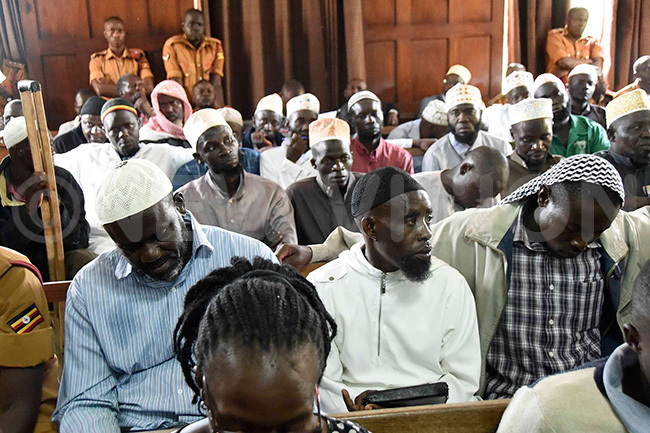 Mukulu and the group are accused of participating in the murder of seven people including Sheikh Abdukadir Muwaya and Sheik Yunus Abubakeri Mandangu.

Prosecution led by the senior assistant Director of Public Prosecution (DPP), Lino Anguzu alleges that the accused and others still at large on December 25, 2014, at Kavule LC1 in Mayuge district, murdered Muwaya.

According to prosecution, the accused committed the offence between 2002 and 2015 in various districts including Kampala for purposes of influencing the government or intimidating the public for political, religious, social or economic aim, and indiscriminately without due regard to the safety of others or property.

According to the DPP, the accused persons under the command and leadership of Mukulu alias Jamil Alirabaaki, Salim Ali Yahaya, Ali Kabambwe, Musa Muku Nabangi Adam Din Bashir and Sheik Rashid Wasigu Ahmed were all times members of ADF, a terrorist organisation and members of Salaf Islamic Sect in Uganda.

The prosecution further purports that the other accused persons committed the various offences as aiders and abettors and were acting as joint offenders in the prosecution of a common purpose.

Why would a man sleep with a maid?

Are you a wife or party girl?