“This award is an illustration of what Uganda is like. We showcased not only our culture, but also our uniqueness, and the organizers were amazed by what Uganda has to offer," says tourism minister Ephraim Kamuntu.

“This award is an illustration of what Uganda is like. We showcased not only our culture, but also our uniqueness, and the organizers were amazed by what Uganda has to offer," says tourism minister Ephraim Kamuntu.

DURBAN - Uganda has won gold in the South African Development Community and Africa category at the Indaba Tourism Fair that concludes today (Saturday) in South Africa.

This is the third time that the Pearl of Africa is winning big at Africa Travels Indaba, having previously emerged top in 2015 and 2016.

Lilly Ajarova, Uganda Tourism Board's CEO said the feat shows that Uganda is now positioning itself to take its rightful place as a leading tourist destination in Africa and the world.

"We put a lot of work into our exhibition stall to ensure that it captures all elements of tourism in our country -- that is wildlife and cultural heritage -- whilst also ensuring that the spacing would enable close interaction with our visitors," she said.

"We are elated to have won gold as the best exhibitor at this year's Indaba fair. This is true testament to Uganda's immense natural endowment and also shows that the world is appreciating our tourism potential.

"This, therefore, calls for concerted efforts to market our country to the world because we offer the most complete tourist experience," said Ajarova, who took charge of UTB in January this year.

On the latest honours, tourism minister Prof. Ephraim Kamuntu said Uganda has demonstrated that is it is a force to be reckoned with in the tourism sector.

"This award is an illustration of what Uganda is like. We showcased not only our culture, but also our uniqueness, and the organizers were amazed by what Uganda has to offer.

"I am happy that we are being recognized for our uniqueness," he said. 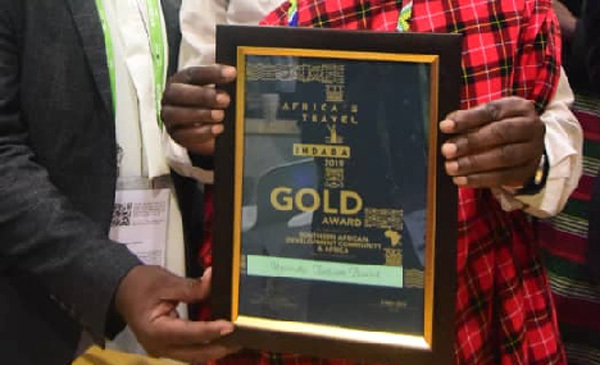 Uganda has severally received accolades for its creative showcase and engagement during global expos, and its stalls keep registering rising levels of activity. It was a successful showcase for Uganda at ITB Berlin, the Bird Fair in London, UK in 2017 and the Kenya Tourism Expo, among others.

Africa Travels Indaba is a tourism expo hosted by South African Tourism and attended by both tourism buyers and sellers from all over the world at the International Convention Center in Durban, South Africa.

It is the third-largest annual tourism expo in the world and the largest on the African continent. It is a leading business-to-business exhibition for Africa's leisure travel industry; bringing the world to Africa and bringing Africa to the world's leading source markets.

Some of the government agencies that have attende the 2019 event, which ends today (Saturday), include Kampala Capital City Authority, Uganda Wildlife Authority and Civil Aviation Authority.

The others are private tour operators.

Last year, over 7,000 delegates from over 80 countries attended the Indaba Fair. That statistic is expected to rise in the near future. This year's edition has been themed: ‘Be Part of the great African Story and write your success.'

Nick Cannon is a great guy, he loves Uganda - Muhoozi