MENU
Look out for the moon on Saturday, Muslims told
Previous Story

People love coffee and beer for the buzz, ...
Next Story

GIZ supported the initiative known as ‘Toilets making grades’ and selected five schools that were awarded and will work as model schools in the city to promote better hygiene practices.

Nakivubo Blue Primary School head teacher, Agnes Kabalisa receives a certificate from the Deputy Head of Development Cooperation at the German embassy during the Toilets making grades awarding ceremony at KCCA offices on May 02, 2019.Photo by Sylvia Katushabe

GIZ supported the initiative known as ‘Toilets making grades’ and selected five schools that were awarded and will work as model schools in the city to promote better hygiene practices.

KAMPALA - Fiona Tibirowoza, a primary five pupil in one of the city schools says she usually loses concentration towards the end of classes as she has to rush home to use the toilet.

Tibirowoza is not alone. About 67,000 pupils in Kampala Capital City Authority (KCCA) suffer the same because of the poor sanitation at most city schools.

The poor sanitation facilities such as dirty toilets with a strong stench do not allow them to concentrate in class, and this, they say is affecting their grades as some girls miss classes during their menstruation.

It is against this background that the German Toilet Organization in collaboration with KCCA organised a contest in which 10 out of the 79 KCCA schools were selected to come up with proposals and solutions on how they can manage sanitation in schools.

GIZ supported the initiative dubbed ‘Toilets making grades' and selected five schools that were awarded and will work as model schools in the city to promote better hygiene practices. The school selected among the best had messages on how to maintain and manage hygiene, how to use a toilet and leave it clean and also how to wash their hands.

The Kampala Minister for Metropolitan Affairs, Beti Kamya told teachers and pupils that if their schools are to perform better in the country, there is a need to have better hygiene and facilities for the learners.

She urged the learners to maintain hygiene not only at their schools but also in the homes and communities they stay.

She told pupils, teachers, and parents during the ‘Toilets making the Grade' school contest at the KCCA gardens that development partners play a big role in assisting the government to implement some these programmes.

"The German government has shown us what to do, it would be sad if they return and find that the programme they have initiated was wasted and has not caused impact," she said. 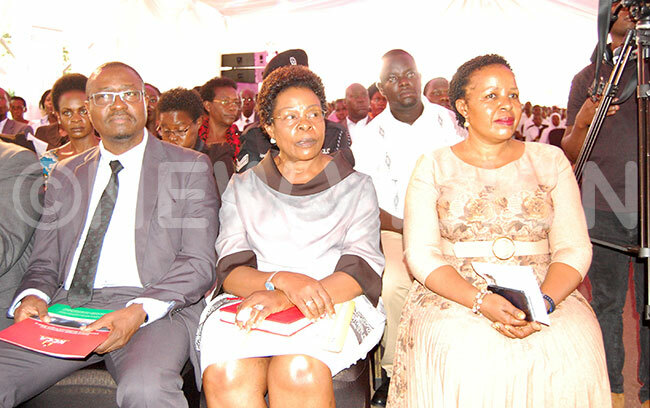 The KCCA acting executive director, Andrew Kitaka said there are many schools in the city whose sanitation is still a challenge, and they need to emulate the model schools which have been selected.

Kitaka urged the schools to be ambassadors of other schools outside the city and the communities.

The deputy head of Development Cooperation at the Embassy of Germany Hans Hinrich Schnelle, who represented the German ambassador, told the pupils that cleanliness makes them better persons.

Juliet Namuddu, the director education services at KCCA said that the time KCCA came into office, the toilet pupil ratio was 1:180, adding that it is now 1:50 since the intervention of development partners.

The mayor of Nakawa Eng. Nsubuga Balimwezo said that the move by GIZ is strongly welcomed by the political leaders, saying that it is better, to begin with, the young generation.