Home
NEWS
Media
Supplements
Tenders
Notices
Some of the items were supplies meant for public health facilities labelled “Government of Uganda Not for Sale” while other boxes contained counterfeit medicines.

Some of the items were supplies meant for public health facilities labelled “Government of Uganda Not for Sale” while other boxes contained counterfeit medicines.

KAMPALA-The Ministry of Health and several agencies have recovered 981 boxes of stolen and counterfeit medicines and health supplies worth over sh490.5m.

Some of the items were supplies meant for public health facilities labelled "Government of Uganda Not for Sale" while other boxes contained counterfeit medicines.

Health minister, Dr Ruth Aceng on Thursday said the theft of medicines was affecting service delivery at a time when government was increasing the budget for medicines.

Five operations were conducted between March and April 2019 in eastern Uganda districts of Bukedea, Soroti, Bulambuli, and Serere, and in Kampala.

In eastern Uganda, hawkers were found selling medicine yet they had no knowledge in handling medicine, hence exposing the unsuspecting population to health risks, the report says. 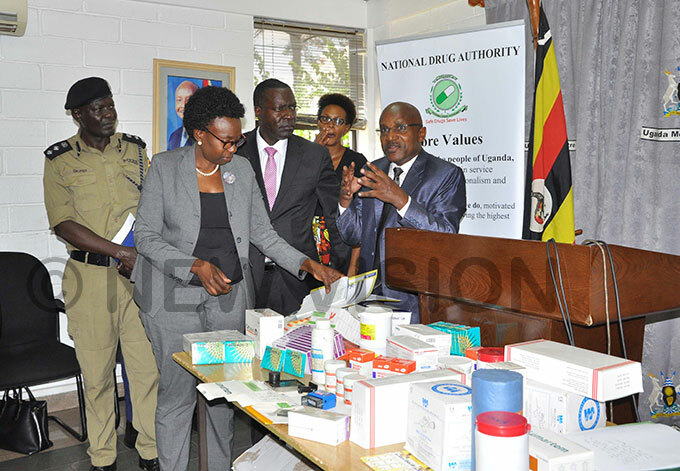 In Kampala, three trailers were impounded with boxes of assorted medicines, including one carrying medicines and health supplies intended to be exported to neighboring countries.

It emerged that one of the trucks had 198 packs of suspected counterfeit Postinor 2, one of the commonest emergency contraceptives.

Five of the key suspects in the George Makubuya in Rubaga are held at Old Kampala Police Station. They are: Frank Namanya, Onesmus Nimuhwezi, Deo Mburakeye, Nalongo Deborah Nalule and Joseph Babihize of Kyanja.

Dr Medard Bitekyerezo, the National Drug Authority board chairperson said one of the suspects, a Chinese national used a liquid substance to falsify dates on contraband and used a machine to emboss them.

He appealed to the public to be vigilant when purchasing medicines and not pay for medicines labelled, "Government of Uganda Not for Sale."

In the next financial year 2019/2020, the medicines budget has been increased by 24% from sh300b to sh396b, with focus on ending the funding gap for ARVs and anti-malarials.

Dr Jackson Ojera, the director of the State House Health Monitoring Unit called for stronger regulations to ensure that facilities that sell fake or government drugs are closed permanently.

David Nahamya, the NDA executive director advised the public to purchase medicines only from licensed health facilities and stay away from hawkers. Whistleblowers can report cases on 0800101999 and 0800100066