What is labour and why put aside a special...
Next Story

Last weekend the investment spotlight was firmly fixed on London, as the 4th UK East Africa Health Summit came to the capital, hosted at the prestigious British Medical Association, with the aim of strengthening health systems in Africa.

Last weekend the investment spotlight was firmly fixed on London, as the 4th UK East Africa Health Summit came to the capital, hosted at the prestigious British Medical Association, with the aim of strengthening health systems in Africa.

OPINION
Dr. Nik Kotecha OBE
When the Prime Minister Theresa May visited Africa last year she set an ambitious target for the UK to overtake the US to become the G7's biggest investor in Africa by 2022.
During the three-day trade mission to South Africa, Nigeria and Kenya the PM promised a ‘new partnership' fuelled by UK private sector companies and the Government investing billions of pounds to match the economic might of rival foreign investors China and the United States.
Last weekend the investment spotlight was firmly fixed on London, as the 4th UK East Africa Health Summit came to the capital, hosted at the prestigious British Medical Association, with the aim of strengthening health systems in Africa.
Delegations from the UK and African governments, NHS leaders, policy makers and representatives from African Ministries of Health came together with international healthcare experts, investors, solution providers and business leaders.
A focus for the summit was looking for greater and more effective private sector investment in order to achieve national and international goals, including the United Nations Sustainable Development Goals (SDGs).
Speaking at the House of Lords event on day 1 of the summit, Lord Dolar Popat, UK Trade Envoy to Rwanda and Uganda, said: "Uganda and UK have what it takes to be partners on the road ahead in world class health care.
We share a tremendous history, a common working language, and a lot of affection for each other's countries. We have to work together, so that we can help each other to have a mutually bright future ahead."
One entrepreneur and business leader who is working to provide solutions to current and future health issues is Dr Nik Kotecha OBE, Chief Executive of Morningside Pharmaceuticals. 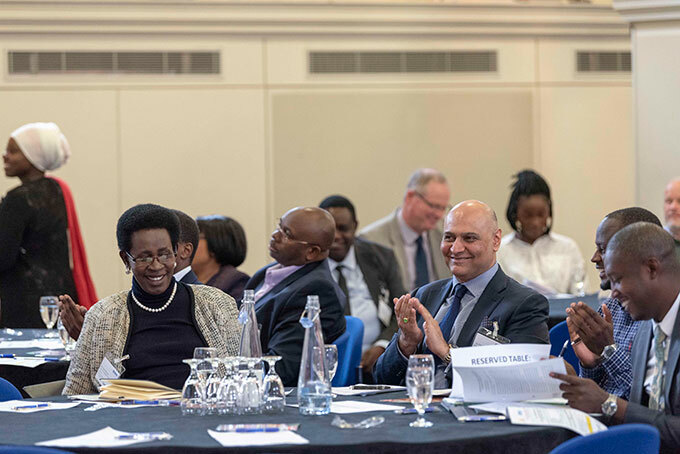 Diana Atwine and Dr. Nik Kotecha OBE at the UK East Africa Health Summit.
Dr Kotecha has been doing business in Africa for almost 30 years. In that time his company has supplied cost effective, quality medicines directly to African countries by working with the Private sector, Ministries of Health, and through large aid agencies such as UNICEF, The World Health Organisation (WHO), MSF and the Red Cross.
During the summit Dr Kotecha hosted a Q&A session on Safe Access to Medicines, Vaccines and Medical Devices, focussing on areas where private sector investment can establish and build sustainable processes and healthcare systems in Africa.
"When the Prime Minister visited Africa last year she saw big opportunities for the UK's private business sector, which has the capacity to deliver significant investment and innovations," says Dr Kotecha.
"There are a number of healthcare areas where UK investment will make a real difference.
Firstly, there are great opportunities to set-up local manufacturing facilities in Africa to ensure the supply of cost effective quality medicines is improved and maintained.
This is starting to happen but still 79% of medicines consumed in Africa are imported2.
"This comes with its own challenges as the supply chain is fragmented and often has an excessive number of intermediaries between the facility where the medicine is manufactured and the dispensing outlet.
"Counterfeit, or ‘fake' medicine is also a huge problem. It's estimated that fake anti-malarials contributed to 116,000 additional deaths a year from Malaria in Sub-Saharan Africa alone3.
While governments need to do more to stop these medicines coming into the system, the private sector has an opportunity to invest in innovations, such as 2D barcoding and tamper evident packaging.
"Supply chains offer another investment opportunity to UK businesses. Quality medicines require secure transportation and a temperature controlled environment.
There is a great opportunity for UK businesses to invest in the infrastructure around the whole supply chain of medicines, as inadequate transportation and storage will lower the quality of the products."
One African healthcare issue which is also a concern to the West is antibiotic resistance, which includes finding new ways to fight drug-resistant super-bugs.
"Many African communities are still using the older antibiotics," says Dr Kotecha.
"These antibiotics are used less in established economies because newer antibiotics have been introduced.
Resistance is a big problem mainly because there has been so much over prescribing of antibiotics. Not enough Research and Development is taking place to allow us to come up with new molecules.
The significant funding for research just isn't there.
"Some of the newer drugs do work much better than the older ones. However, that is the nature of these types of medicines, there will always be microbial resistance of some sort when trying to treat these diseases. It means you need investment in new molecules and medicines to take place, which is where private sector businesses have the answers and will play a pivotal role."
As well as looking at how the UK can help African communities, the summit also looked at partnerships with the NHS.
Dr Kotecha said: "The idea of this summit was to bring health professionals from East Africa into the British Medical Association with the support of the British Medical Journal. There were significant key opinion leaders and healthcare professionals from the healthcare industry in East Africa who attended.
"An outcome of the summit will hopefully be that skills and expertise that we have in the NHS will be provided to our African colleagues, and we are also learning from some of the great work that's happening in East Africa.
Nursing was a particular focus of the summit, with health and political leaders discussing ways to help share best practices around this very important role.
"I hope to see some collaborations where we can send our NHS nurses and doctors out into Africa to help with techniques and knowledge bases there, as well as invite healthcare professionals from East Africa here for training".
"It's clear there are no easy answers to some of the healthcare challenges faced by the African nations. But if politicians, healthcare professionals, Aid agencies and business leaders can work more closely together, then we stand a great chance of making significant progress."
Lord Nigel Crisp, who was Chief Executive of the National Health Service (NHS) and Permanent Secretary to the Department of Health between 2000 and 2006, added: "Nurses and midwives make up the largest part of the health workforce in East Africa and I believe that some of the greatest improvements in health will come from enabling them to work to their full potential.
They are the health professionals closest to the community and with support from technology and medical staff can reach and help more people than ever before."
The UK East Africa Health Summit was convened and supported by the Uganda UK Health Alliance, British Medical Association (BMA), British Medical Journal (BMJ), NHS Health Education England and headline sponsors Morningside Pharmaceuticals.
The writer is the Chief Executive of Morningside Pharmaceuticals