How the world is reacting to Venezuela 'co...
Next Story

"We call on the people to remain on maximum alert to -- with our glorious National Bolivarian Armed Forces -- defeat the attempted coup and preserve peace," said Communications Minister Jorge Rodriguez.

Venezuelans stand next to members of the security forces in Caracas on Tuesday. (AFP)

"We call on the people to remain on maximum alert to -- with our glorious National Bolivarian Armed Forces -- defeat the attempted coup and preserve peace," said Communications Minister Jorge Rodriguez.

Venezuelan opposition leader and self-proclaimed acting president Juan Guaido said on Tuesday that troops had joined his campaign to oust President Nicolas Maduro as the government vowed to put down what it called an attempted coup.

"We are currently facing and deactivating a small group of treacherous military personnel who took positions in the Altamira distributor road (in Caracas) to promote a coup d'etat," Communications Minister Jorge Rodriguez said on Twitter.

"We call on the people to remain on maximum alert to -- with our glorious National Bolivarian Armed Forces -- defeat the attempted coup and preserve peace," he said.

In a video recorded at a Caracas military air base posted on social media, the US-backed Guaido said troops had heeded months of urging to join his campaign to oust Maduro. 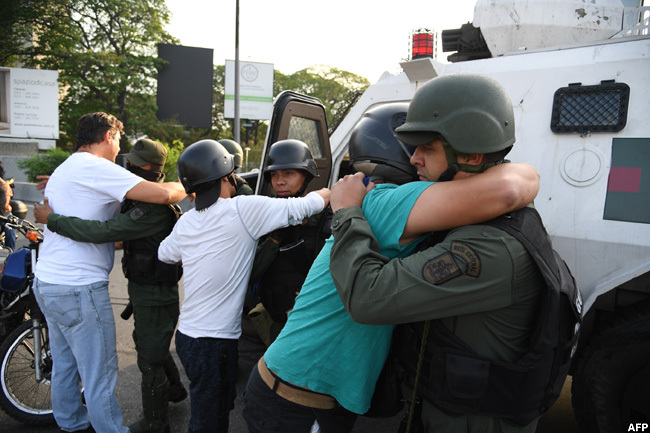 Venezuelans hug members of the security forces in Caracas

Television images showed soldiers and Guaido supporters at the largely empty base milling around without urgency.

Colombia's president, Ivan Duque, called on Twitter for "soldiers and the people of Venezuela to place themselves on the right side of history, rejecting dictatorship and Maduro's usurption."

Colombia also said it was calling an emergency meeting of the Lima Group -- a grouping of major Latin American nations plus Canada focused on Venezuela.

In his video, Guaido appeared alongside high-profile opposition politician Leopoldo Lopez who had been put under home arrest by Maduro's regime but who announced he had been "freed" by soldiers supporting Guaido.

Lopez posted a picture on Twitter with men in uniform, and said it was taken at the La Carlota military base in eastern Caracas.

"Venezuela: the definitive phase to end the usurpation, Operation Liberty, has begun," read the message. 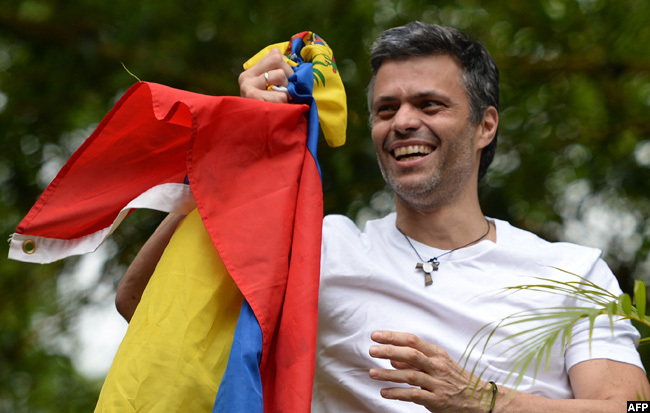 Venezuela's Defense Minister Vladimir Padrino Lopez asserted on Twitter that the situation in military barracks and bases in the country was "normal."

Tensions in Venezuela have been ratcheted up to a critical level this year, after Guaido, who is head of the opposition-ruled National Assembly, announced January 23 that he was the acting president under the constitution. He said Maduro had been fraudulently re-elected last year.

But Maduro, who since taking over from his late mentor Hugo Chavez in 2013 has presided over a catastrophic economic implosion, has been able to count on support from Russia and China, Venezuela's two biggest creditors. 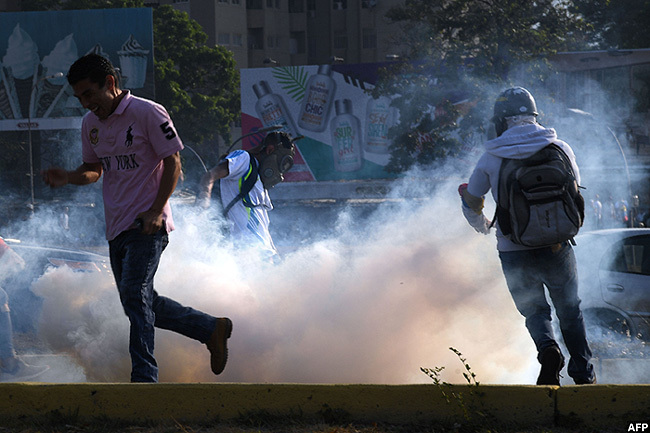 Although US President Donald Trump has repeatedly said "all options" are on the table regarding Venezuela -- including, implicitly, military action -- there has been no noticeable US military mobilization.

Instead, Washington has upped the economic pressure, through sanctions aimed at Maduro's regime and by cutting sales of Venezuelan oil -- the South American country's main revenue earner.

It also warned against any attempt to arrest Guaido, who has been left free to roam Venezuela and hold rallies.

Maduro and his government have repeatedly accused the United States of trying to foment a coup, and blame the economic devastation in the country on the tightening US sanctions.

In Madrid, the government warned against bloodshed.