End of an era as Japan's emperor abdicates

Akihito stood on a small stage before an invited audience and members of the royal family and offered his "deepest heartfelt gratitude to the people of Japan".

Emperor Akihito (left) hands over his statement to the chamberlain after delivering his speech to the top government officials and members of the royal families during his abdication ceremony. (AFP)

Akihito stood on a small stage before an invited audience and members of the royal family and offered his "deepest heartfelt gratitude to the people of Japan".

Emperor Akihito of Japan formally stepped down Tuesday, the first abdication for 200 years in the world's oldest monarchy, as his son Naruhito prepared to take the Chrysanthemum Throne and usher in a new imperial era.

In the "Room of Pine" in Tokyo's Imperial Palace, the popular 85-year-old performed the abdication ritual in the presence of the imperial regalia -- an ancient sword and sacred jewel.

Dressed in a Western-style morning coat, Akihito stood on a small stage before an invited audience and members of the royal family and offered his "deepest heartfelt gratitude to the people of Japan."

He said he would "pray for the peace and happiness of all the people in Japan and around the world."

Empress Michiko stood by his side in a white and silver gown and the outgoing emperor paused briefly after exiting the stage, to help his wife of 60 years down the steps.

Prime Minister Shinzo Abe praised the royal couple, saying they had offered "courage and hope" to the Japanese people, particularly in times of suffering.

"His Majesty has fulfilled his responsibility as the symbol of Japan," Abe said. 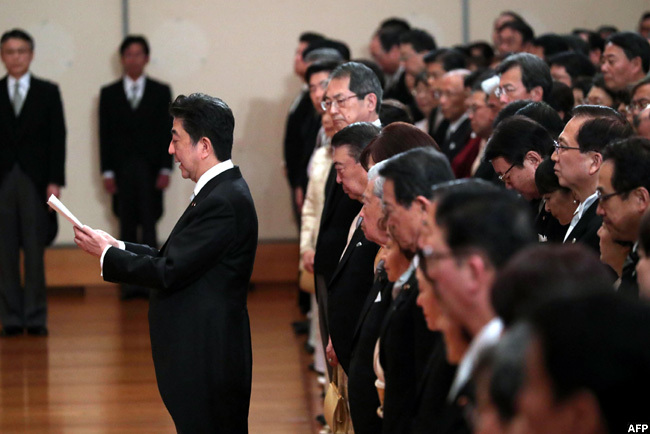 Prime Minister Shinzo Abe delivered his speech during the ceremony

Despite near-constant rain in Tokyo, several hundred wellwishers congregated outside the Palace during the historic ceremony attended by around 300 people.

"In the past, enthronements followed the death of emperors and people weren't sure whether they should be happy and celebrating, but with this transition, I am sure that we can celebrate while welcoming the new era," she said. 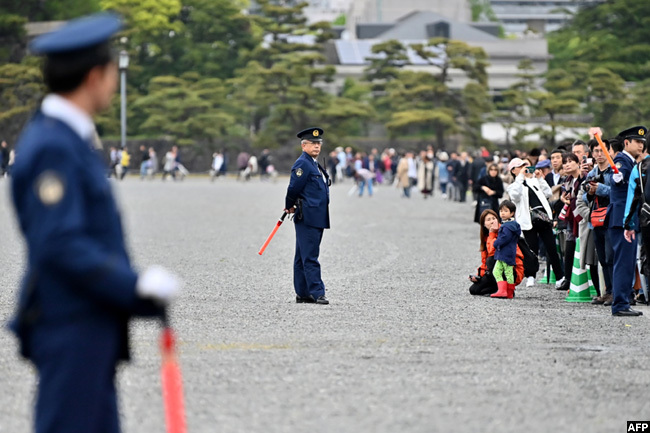 Police kept watch as people gathered outside the Imperial Palace

Akihito will technically remain emperor until the stroke of midnight when Naruhito takes over and the new era of "Reiwa" -- meaning "beautiful harmony" -- begins, lasting for as long as he reigns.

Earlier Tuesday, draped in ornate golden-brown robes and wearing a towering black hat, Akihito reported his abdication to his ancestors and Shinto gods at several sanctuaries in the palace.

On Wednesday, the 59-year-old Naruhito will inherit the imperial regalia in a 10-minute ceremony that is off-limits to female royals, even his wife Masako. He will shortly afterwards make his first address to the nation as its 126th emperor.

Crowds were expected to gather to count down to the new era outside the palace and at the scramble crossing in Tokyo's lively Shibuya district, although the drizzle threatened to dampen some of the enthusiasm. 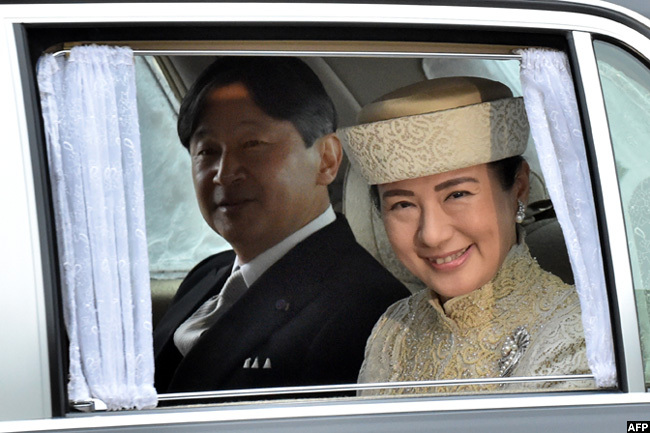 Security has been beefed up with extra police patrols on the streets, sniffer dogs scouring the palace grounds and even divers inspecting the moat.

A more public enthronement ceremony will take place on October 22, during which Naruhito will parade through the streets of the capital and be congratulated by other world leaders and royalty.

President Donald Trump sent congratulations, offering "heartfelt appreciation" to the outgoing imperial couple and stressing the "close relationship" between the US and Japan.

He will become the first foreign leader to meet the new emperor on a trip in May.

'Felt close to him' 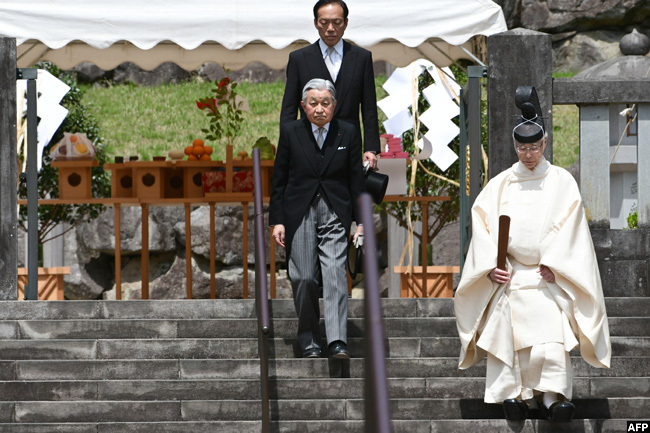 On April 23, Emperor Akihito visited the mausoleum of his late father, Emperor Hirohito at the Musashino Imperial Graveyard in Hachioji

Born in 1933 as Japan was embarking on a militaristic sweep across Asia in the name of his father Hirohito, the 11-year-old Akihito listened in tears as his nation's defeat in World War II was announced in an unprecedented radio address.

He has broken new ground in the sensitive role, expressing regret over Japan's wartime actions and gradually modernising the royal family and bringing it closer to the people.

Akihito and Michiko, whom he met at a tennis tournament in 1959, touched hearts in Japan and around the world when they knelt before survivors of the 2011 earthquake and tsunami and listened to stories of terrible suffering.

"It is true the emperor is seen to be like a god, but at the same time, you felt that you were close to him," Rikia Iwasaki, a 13-year-old schoolboy, told AFP outside the Imperial Palace. 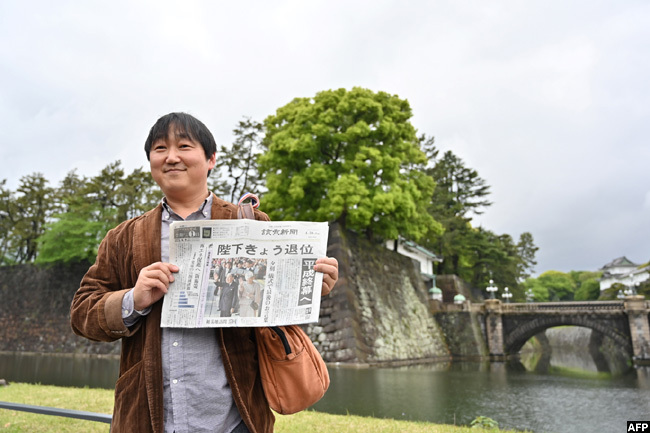 The Oxford-educated Naruhito now faces the delicate balancing act of continuing his father's popular legacy while upholding the traditions of the Chrysanthemum Throne that stretch back centuries.

He has called for "new royal duties" to fit modern times and has criticised the sometimes stifling lifestyle imposed on royals, especially as his wife Masako has struggled to adapt to palace life.

The abdication has resulted in a 10-day holiday in Japan, although polls show many famously hard-working Japanese were opposed to such a long break.

They have nonetheless taken the opportunity to travel, with bullet trains and airports overflowing and Tokyo's usually packed commuter trains eerily empty at rush hour.

Entrepreneurs have sold everything from "Reiwa" bottles of sake to $10 cans of air from the "Heisei" era of Akihito's reign.