GBV became the major obstacle to poverty reduction, and the drive to curb the spread of HIV and AIDS, according to the Ambassador of Ireland to Uganda William Carlos.

GBV became the major obstacle to poverty reduction, and the drive to curb the spread of HIV and AIDS, according to the Ambassador of Ireland to Uganda William Carlos.

When the government of Ireland embarked on providing support towards ending Gender Based Violence (GBV) in Busoga region in 2011, 70% of the women were found to have been victims.
According to the 2006 Uganda Demographic Health Survey, the women had experienced either physical or sexual violence from the age of 15.
Half of the women experienced this violence from their husband or intimate partner within the home.
However, only 6% of the women reported their cases to formal institutions like the police, according to the 2006 survey.
Implications
GBV became the major obstacle to poverty reduction, and the drive to curb the spread of HIV and AIDS, according to the Ambassador of Ireland to Uganda William Carlos.
It equally blocked opportunities to access education and failed efforts to achieve full equality between men and women plus boys and girls. The cost of GBV was suffered by women, children, families, and communities. 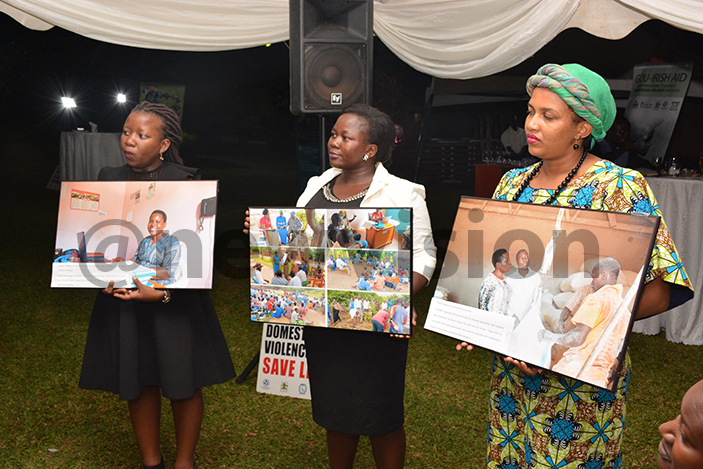 Plaques highlighting the story of Harriet Nabirye, a survivor of gender-based violence during a reception to recognise achievements of the joint Gender Based Violence programme by the Government and Ireland in Busoga. PHOTO: Timothy Murungi

This pushed the introduction of the GBV prevention and response programme in Busoga sub-region by Uganda and the government of Ireland.

Gains
Now eight years down the road, Busoga sub-region has registered significant progress and reduced cases of  GBV from 74% (in 2006) to 48% (in 2016).
"It all stemmed from a change in attitude and practices that promoted GBV leading to more women breaking their silence and seeking help whenever GBV occurred," Ambassador Carlos who hosted a reception at his residence in Kampala to celebrate the gains on ending GBV said.
A total of 192 community activists were trained and supported to mobilize communities to end GBV.
Carlos said the new Ireland policy for international development is focused on gender equality and addressing GBV.
"We all know that development cannot be achieved where there is a high prevalence of GBV in all its forms whether it is in the home, in communities or the workplace, whether it is sexual, physical or emotional," he said.
Investment and future
Over the last eight years, the Irish government has provided €3.7 million (about sh14.8billion) towards the prevention and response to GBV cases in Busoga.
The envoy pledged more support. This year marks 25 years of official Ireland Uganda partnership.
Carlos also commended the ongoing work to develop a second national action plan to implement the UN Security Council resolution 1325 on women, peace, and security that will further protect women (including refugees who are particularly affected) from GBV.
The Permanent Secretary in the Ministry of Gender, Labour and Social Development Pius Bigirimana said reviews indicate awareness and ability to discuss GBV in Busoga has increased from 47% in 2011 to 54% in the last year.
"Members of the community are now able to discuss practices that contribute to GBV in their respective areas with the aim of stopping the vice," he said.
Social norms and perceptions have also changed. "Findings show a declining trend in the perception of women and men who find wife beating acceptable," has increased added.
He also said acceptability of wife beating that was at 15% in 2011 reduced to 9% as of 2016.
Ambassador
Bigirimana who was the guest of honour said discussions are ongoing on how the GBV prevention program in Busoga region can be scaled up not only in Busoga but other parts of the country in line with the 2016 national policy and action plan of elimination of GBV.