The Prelate asked his fellow Christian preachers to put more emphasis on God’s kingdom of peace, love and human brotherhood as opposed to the gospel of prosperity.

The Orthodox Archbishop, Jonah Lwanga addressing the press ahead of Easter at Namungoona Orthodox Cathedral on Thursday, April 25. Photos by Mathias Mazinga

The Prelate asked his fellow Christian preachers to put more emphasis on God’s kingdom of peace, love and human brotherhood as opposed to the gospel of prosperity.

KAMPALA - The Orthodox Archbishop, Metropolitan Jonah Lwanga has attributed the rampant murders and land grabbing to the growing culture of materialism, which he said had corrupted the minds of many Ugandans.

Without mentioning particular Christian denominations, Lwanga blamed some clerics and evangelical pastors, who he said had contributed to the country's problems by preaching the gospel of prosperity.

"Excessive love for money, power, and material things is the basic reason why people kill others.  Some people see money and material possessions as the supreme good that they must attain even if it requires them to kill others. They have become so mad that they even pull down people's houses and grab their land," he said.

"We now see hundreds of internally displaced persons, without any war or natural disaster! We need to repent and ask God to forgive us. We are a religious country. We are people who know God. We cannot afford to be seen doing things that depict us as atheists and uncivilized people," Lwanga said.

Metropolitan Lwanga was delivering his Easter Message at Namungoona Orthodox Church yesterday. Unlike other Christians, the Orthodox Church will celebrate Easter this Sunday 28 April.

The Prelate asked his fellow Christian preachers to put more emphasis on God's kingdom of peace, love and human brotherhood as opposed to the gospel of prosperity.

"I think we the preachers are also to blame for some of the woes of our country. We have forgotten about our true prophetic role of proclaiming the saving love of Jesus and we are busy stuffing our followers with oracles of wealth and power. We must refrain from this." 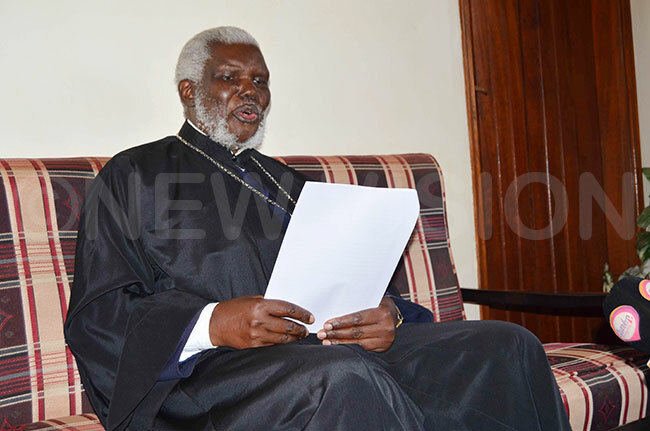 Lwanga asked Orthodox Christians and all Ugandans to use Easter to renew their relationship with God and their fellow Ugandans.

"As we celebrate the resurrection of our Lord Jesus Christ, let us lead a Godly lifestyle that is based on the principle of love of God and love of neighbour. Let us not be hypocritical Christians, who profess to be followers of Christ yet our minds are being controlled by Satan."

As he concluded his message, Lwanga announced that the Orthodox Easter will take place on Sunday, April 28.

During the same function, Metropolitan Lwanga announced the centenary of the Orthodox Church in Uganda, which is soon.

"This year we are celebrating 100 years of Orthodoxy in our country. But for us Orthodox Christians, we do our things in a very humble way. Our culture is of simplicity. We are never pompous. So, don't expect a grandiose function."

As one of the activities of the Orthodox centennial celebrations, Lwanga said, the Orthodox Christians were going to build a gigantic memorial Cathedral on their land at Lubya hill, in Rubaga Division. The ground-breaking function, which is expected to be presided over by President Museveni, will take place on May 5.

The political situation in the country

Answering questions from journalists, Metropolitan Lwanga made comments about the political situation in the country.  Responding to one of the journalists who sought his comment about alleged intolerance and Police brutality against opposition politicians, Lwanga said: "Just fasten your belts because that is how the NRM government will behave until it gets dissolved."

Asked what he had to say about the four Supreme Court judges, who ruled in favour of lifting the presidential age limit, Metropolitan Lwanga said: "Those four judges belonged to the NRM party. The other three did not."

Lwanga also chipped at land-grabbers. "Those who grab other people's land must remember that they will not carry the land they steal to heaven. I pray that they repent now."

The Orthodox Vicar General, Fr Paul Mutaasa explained why the Orthodox Easter was going to occur on April 28 as opposed to April 21.

Mutaasa said that Orthodox Christians followed the Calendar of St Julian, while the other Christians were subscribing to the Calendar of St Gregory. He said the Gregorian calendar has 13 missing days, which sometimes cause the respective disharmony in the celebration of Easter. Mutaasa also said that the events of Easter happened after the Passover. So, they could not celebrate Easter before the Jewish celebration of the Passover.