How a city building has cut its energy bill
Next Story

In neighbouring Tanzania, the authorities issue red alerts to warn of the dangers from rain, floods and landslides.

The battered coast of Cabo Delgado, Mozambique, where cyclone Kenneth slammed into the country. (AFP/WFP)

In neighbouring Tanzania, the authorities issue red alerts to warn of the dangers from rain, floods and landslides.

A powerful cyclone pounded northern Mozambique on Friday, leaving one person dead and wrecking homes and communications, barely a month after the country was hit by one of the worst storms in its history.

Cyclone Kenneth, a Category Three storm on the hurricane scale, made landfall in Cabo Delgado province late Thursday after swiping the Comoros islands.

By mid-Friday, its peak winds of 160 kilometres (100 miles) an hour had fallen back to about 70 kph, according to the national meteorological institute.

But heavy rains were forecast over the next 24 hours, fuelling the risks of floods and mudslides in the poor region.

Mozambique's emergency agency, the INGC, reported a death caused by a falling coconut tree in the port city of Pemba, Cabo Delgado's provincial capital, along with severe flooding, mudslides and widespread power outages.

The International Federation of Red Cross and Red Crescent Societies (IFRC) reported "heavy damage" and wrecked homes in some coastal towns along the northern coast, while communication lines in Macomia and Muidumbe remain down.

In many affected communities, areas "are prone to flooding and landslides in normal rainfall, and this is far from a normal situation," it warned. 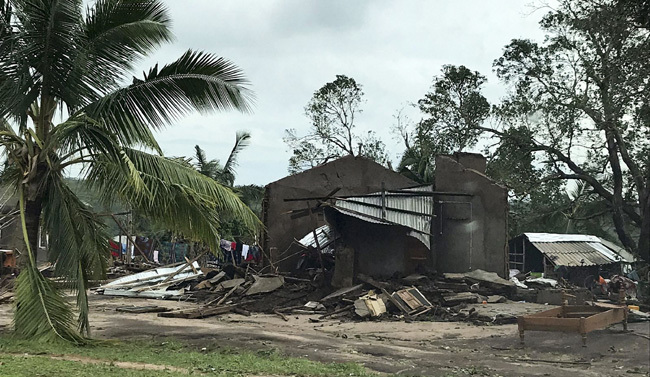 On the tourist island of Ibo, home to 6,000 people, 90 percent of homes had been flattened, according to a spokesman for the INGC, Antonio Beleza.

"It looks like the island has been bombed... It is biblical," said a South African tour operator and owner of a hotel on Ibo, Kevin Record.

Communities in central Mozambique are still reeling from Cyclone Idai, which hit on the night of March 14-15, causing killer floods that swept away homes, roads and bridges.

The storm also smashed into Zimbabwe and Malawi. In the three countries, more than a thousand lives were lost, and damage is estimated at around $2 billion (1.8 billion euros).

The UN World Food Programme (WFP) on Thursday said Kenneth was expected to dump over 600 millimetres (almost 24 inches) of rain over the next few days in some areas.

By way of comparison, this would be nearly double the amount that fell on the central city of Beira during Cyclone Idai -- a downpour that turned parts of the region into an inland sea. 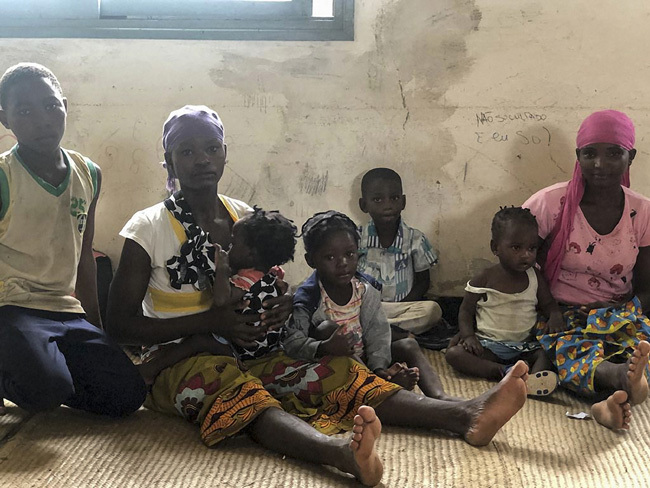 Already, families, like these ones, have been displaced from Paquete district of Pemba. (AFP/WFP)

"Although floodwaters have receded in most areas it (Idai) affected, access is still a challenge as infrastructure was severely compromised," the WFP warned.

"This second cyclone is an additional blow for the people of Mozambique and bound to complicate the humanitarian response."

The UN agency added that it had already provided food aid to 1.3 million people after Idai.

The government has made public buildings including schools available to people seeking shelter and the WFP has "pre-positioned" over 500 tonnes of food.

A helicopter is expected to arrived in Cabo Delgado when weather conditions allow as roads are expected to be impassable because of flooding, making food delivery difficult.

Forecasters at Meteo-France warned that Kenneth could trigger waves off Mozambique's northeastern shore as much as five metres (16 feet) higher than usual. 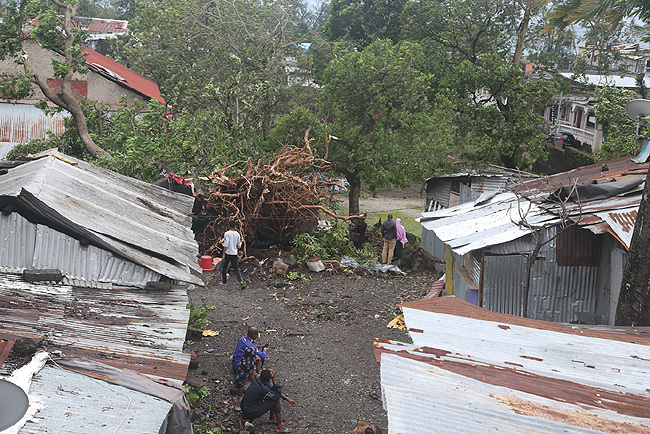 In neighbouring Tanzania, the authorities issued red alerts to warn of the dangers from rain, floods and landslides.

The provinces of Mtwara, Lindi and Ruvuma were at highest risk, the country's meteorological agency said.

Residents in Mtwara were leaving the coastal enclave with their families, some on foot, for emergency shelters, witnesses told AFP by phone.

Gelasius Byakanwa, the governor of Mtwara, ordered schools closed in his province and asked "students to stay home and employees not to go to their offices".

"There is no record of two storms of such intensity striking Mozambique in the same season," the UN's weather agency said.

A fact-finding WMO mission in Mozambique will look at the "impact of climate change and sea-level rise on Mozambique's resilience" to extreme weather, it said.

Higher or more powerful waves are driven towards the shore, potentially posing a greater risk for coastal-dwelling populations.