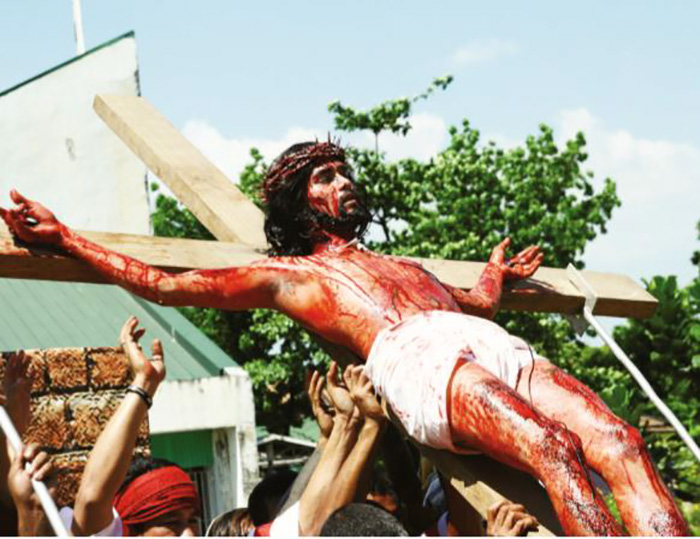 While Easter is a Christian festival along the Passion of Jesus Christ, other societies cherish it with traditional rituals that may seem strange.

Hilary Bainemigisha compiled some of the traditions that leave one puzzled.

In Philippines, people subject themselves to a whipping parade.

In this public event, believers walk on the streets barefoot and halfnaked to replicate the suffering of Jesus.

But weirdest of all is the Easter play. A man chosen to act as Jesus is actually nailed, hands and feet to a cross.

At least three and as many as 12 individuals are nailed to a cross on a makeshift Calvary.

One man, called Ruben Enaje, 53, a carpenter and former construction worker, has been crucified 32 times since 1985.

The ritual, which started in 1962, draws crowds of spectators to see volunteers who offer to be crucified.

In 2017, in the city of San Fernando, 80km north of Manila, 20 people were hung on the crosses for about 10 minutes, before being treated by nearby medical personnel.

In the eastern regions of Moravia and Slovakia, they also pour cold water on them. The spanking may be painful, but it is not intended to cause suffering.

It is believed that it keeps women healthy, beautiful and fertile for the whole year.

The spanked woman gives a coloured egg (kraslice) she has prepared to the man who has spanked her, which is an invitation to eat and drink with him as a sign of her appreciation.

Mexico government sponsors a realistic Passion of Christ play which is recognised by the United Nations Educational, Scientific and Cultural Organisation (UNESCO) as an intangible cultural heritage of Mexico City.

About 4,000 local actors re-enact Christ's walk to his death on Calvary. The man who acts Jesus must be a morally upright individual of physical strength.

He endures a crown of thorns and gets flogged as he carries a 100kg cross. He is then tied to it in a re-enactment of the crucifixion.

The most famous passion play takes place in Iztapalapa, where the tradition began in 1833.

Everyone in the town is involved in the play in some way.

In the northern region, participants dressed in white habits flog themselves at the "Los Picaos" procession in the Rioja Village of San Vicente de la Sonsierra.

Using esparto grass ropes, they whip their backs in a graphic display for 20 minutes. This method of penance used in many places through the 18th century has survived to modern times.

In Seville, the most spectacular processions of masked penitents and lavish floats are driven along streets as thousands line up to watch marching bands and highly decorated candlelit floats heaving with Baroque statues illustrating the Easter story. On Holy Thursday, there is a special scary ‘Dance of Death' celebration in Verges, Gerona, at night by men dressed as skeletons.

In the village of Oberammergau, people hold a special Easter play, called a Passion Play , every 10 years.

The last play performed was in 2010 and the next will be next year. The plays are popular and are booked up for many years in advance with people travelling from all over the world to see them.

Nearly everyone from the village takes part in the play, either as an actor or behind the scenes, making clothes and props or helping to run the play.

The audience is comprised of guests, tourists and special visitors worldwide. The southwestern town of Bensheim hosts an annual Good Friday procession with theatrical performances of the passion of Jesus.

Another tradition is the Easter Fire, where all the old Christmas trees are gathered up and burnt in a special place.

This is done so as to clean away the last signs of winter and moving onto spring. Around this time, eggs used for cooking are not broken but are emptied into a bowl through pinholes at either end.

Brazil One of the biggest carnivals in the world happens in Rio de Janeiro at the Mardi Gras or Shove Tuesday celebrations that start in Lent.

The streets are filled, over several days, with large processions marching, singing and dancing.

People in the parade dress up in bright exotic clothes, with the costumes often made on large wire structures so the people wearing them look very big, like butterflies or birds.

There are big floats, with stands for singing and dancing on built into cars or lorries, decorated as brightly as the people and help make the procession look amazing.

It consisted of people throwing flour and water over each other. In 1856, the police banned the carnivals because they were becoming violent and people were getting hurt.

So people reduced the intensity. When cars started becoming more widely available, they were made part of the carnival as a way of displaying the performers. These grew into the large carnival floats that take part today.

On the Thursday before Ash Wednesday, the tincunaco ceremony is celebrated. Mothers and grandmothers are gathered in two lines, one line with mothers and the other one the grandmothers around an arch made of willow branches.

The arch is decorated with fruit, flowers, cheese, sweets and tiny lanterns. The two groups meet under the arch and exchange a doll, which is touched on each other's forehead.

This is seen as a sacred ceremony and is said to unite the women with a bond only death can break.

On Sunday, the carnival reaches its climax. Women in their traditional attire of wide ruffled skirts, colourful ponchos and white hats mask their faces with starch and water.

They sing folk songs and ride on horseback to where the dance is being held in honour of Pukllay the spirit of carnival.

Once the celebrations have come to an end, a rag doll representing Pukllay is buried as a symbol for the end of the carnival.

Easter is a sacred time and a traditional Easter meal of leek soup and roasted spring lamb is prepared.

People dance in the streets on Easter Sunday competing for the prize of a cake.

Good Friday is an extremely solemn day and most people eat nothing and go about barefoot.

No one kills animals, no wood is burned or made into things, and no nail is driven. No one is allowed to move house or begin any important enterprise.

No one fishes. Eggs that are laid on Good Friday are marked with a cross, and everybody eats every one of these eggs on Easter Sunday.

On Easter Saturday, there are mock funerals of herrings because people are so sick of eating herring during Lent.

The day before Lent is Carnival day, which is referred to as Vastenavond or Fast Eve. Preparations begin the previous year on the 11th day of the 11th month, when a council of 11 meets to organise the plans.

Traditionally, the number 11 is the number for fools and during the carnival, people are allowed to be as foolish as they wish.

In each town someone is elected prince of the carnival and he is handed the keys to the city.

On Palm Sunday children go in processions from farm to farm collecting eggs for the Easter sports.

On Easter Sunday, a special meal is served at a table decorated with coloured eggs, spring flowers and Paasbrood (Easter bread), which is sweet bread with raisins and currants.

In the east, almost every village lights an Easter bonfire on some hill or high point. People begin collecting wood for the fires weeks in advance, each area tries to outdo each other by building the biggest and best fire.

Easter Monday is a day for egg games. The youngest children hunt for coloured eggs which have been hidden around the house or in the garden, while the older children have egg-cracking contests.

Easter is celebrated with the Blessing Basket, which is prepared the Saturday before Easter.

They fill it with coloured eggs, bread, cake, salt, pepper and white-coloured sausages and take it to church to have its food blessed.

Another tradition is the splashing of water at each other, considered to bring good health to all.

For over 800 years, Easter Monday has been a "Switching Day" when boys swat their girlfriends with a small willow branch.

The next day on Easter Tuesday, the girls get even by swatting the boys.

The first Monday after Easter, boys lie in wait to sprinkle girls with water or perfume. It is said that girls who get caught and soaked with water will marry within the year.