MENU
Pumpkin seeds; the source of all nutrients
Previous Story

KHARTOUM - Several cows and sheep were slaughtered Tuesday as Sudanese protesters celebrated the ouster of longtime leader Omar al-Bashir outside the army complex where they have been camped for days, witnesses said. 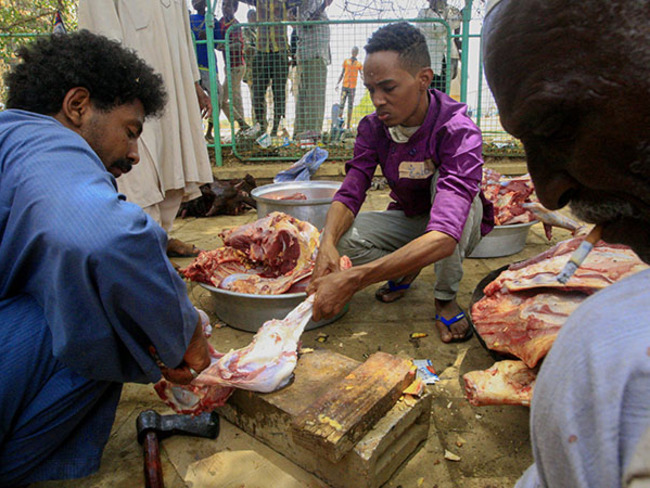 Several cows and sheep were herded to a building near the army complex.

"A group of men arrived early in the morning and slaughtered the animals, and later they distributed the meat among the demonstrators at the main protest site," a witness said.

They cooked the meat as fresh supplies of bread and water were brought in by vans, an AFP photographer reported from the site. Thousands of protesters have camped outside the army complex since April 6.

They first demonstrated to demand the resignation of Bashir and are now insisting on a swift transfer of power from a new ruling military council to a civilian government.

"People have been continuously protesting, They didn't have time to celebrate after Bashir was toppled," said Ahmed Naji, a regular at the sit-in.

"We also have a musical evening planned later for the day where some well-known Sudanese musicians will perform."

While some groups prepared food, there were others cleaning the entire area of the protest site.

Wearing medical masks and carrying brooms, men and women cleaners worked away under a hot afternoon sun, the photographer said.

At the centre of the protest site, groups of men and women danced as musicians played African tunes, while others chanted revolutionary slogans.

But protest organisers cautioned that the "revolution" had still not achieved its goal.

"Yes, we toppled the dictator, but his laws are still there," the Alliance For Freedom and Change, the umbrella group leading the protests said in a statement.

"There's no reason for us to celebrate right now because our revolution has still not achieved its goals. We have not achieved our victory."

Protest organisers have called on supporters to continue with the sit-in, demanding the military council be dissolved.

On Monday, protesters said the army had attempted to disperse the sit-in.

On Tuesday, a witness said several vehicles carrying members of the paramilitary Rapid Support Force were deployed on a bridge connecting north Khartoum to the protest area.

"There could be another attempt by the troops to disperse us, but we will continue," vowed one demonstrator.