MENU
Notre-Dame fire in Paris: what we know so far
Previous Story

Dozens dead in fighting between Chad soldi...
Next Story

"This is really sad — the saddest thing I've ever stood and watched in my life," says a 50-year-old onlooker, who had come to visit the cathedral with her family.

Firefighters douse flames billowing from the roof at Notre-Dame Cathedral in Paris. (AFP)

"This is really sad — the saddest thing I've ever stood and watched in my life," says a 50-year-old onlooker, who had come to visit the cathedral with her family.

PARIS - A colossal fire swept through the famed Notre-Dame Cathedral in central Paris on Monday, causing a spire to collapse and threatening to destroy the entire masterpiece and its precious artworks.

The fire, which began in the early evening, sent flames and huge clouds of grey smoke billowing into the Paris sky as stunned Parisians and tourists watched on in sheer horror.

Some were in tears, others offered prayers from the banks of the river Seine as the much-loved attraction at the heart of the City of Light was consumed by the inferno.

"This is really sad — the saddest thing I've ever stood and watched in my life," said British tourist Sam Ogden, a 50-year-old onlooker, who had come to visit the cathedral with her family.

Notre-Dame is aflame. Great emotion for the whole nation. Our thoughts go out to all Catholics and to the French people. Like all of my fellow citizens, I am sad to see this part of us burn tonight. https://t.co/27CrJgJkJb


Gasps and cries of "Oh my god" erupted around an hour after the fire first broke out when the top portion of the church's spire came crashing down.

"It looked tiny to begin with, then within an hour it all came down," Ogden added.

The cause of the blaze was not immediately confirmed but the cathedral had been undergoing intense restoration work wich the fire service said could be to blame.

My thoughts are with the people of France tonight and with the emergency services who are fighting the terrible blaze at Notre-Dame cathedral. 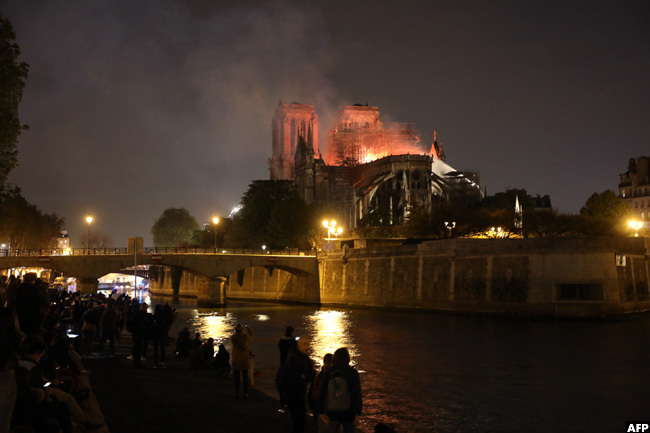 Last week, dramatic footage had shown workers removing 16 copper statues from the spire which was undergoing a revamp financed by the state and private donors.

Deputy Paris mayor Emmanuel Gregoire told BFM TV the spire "collapsed inwards" and that workers were scrambling "to save all the artworks that can be saved."

A spokesman for the cathedral told AFP that the wooden structure supporting the roof was being gutted by the blaze.

"Everything is burning," the spokesman for Notre Dame, Andre Finot, told AFP.


'Emotion of a nation' 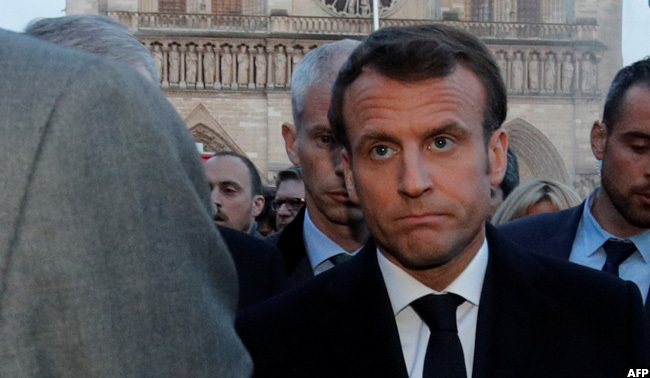 President Emmanuel Macron cancelled a major televised policy speech he was due to give on Monday evening over the "terrible fire ravaging Notre-Dame."

He headed to the scene in person.

In a tweet he expressed the "emotion of a whole nation" on seeing Notre-Dame ablaze.

"Like all my compatriots I am sad to see a part of us burn this evening" he said, expressing solidarity with "all Catholics and all French people."

"The Holy See has seen with shock and sadness the news of the terrible fire that has devastated the Cathedral of #NotreDame, symbol of Christianity in France and in the world." @AGisotti pic.twitter.com/cRjUxkxRwa

There was no immediate indication of any casualties in the blaze.

"The Paris fire service is trying to control the flames," Paris's Mayor Anne Hidalgo wrote on Twitter, asking residents to respect the security cordon thrown up around the site.

A spokesperson for the cathedral said the fire, which comes as French Catholics prepare to celebrate Easter, broke out at around 1650 GMT.

So horrible to watch the massive fire at Notre Dame Cathedral in Paris. Perhaps flying water tankers could be used to put it out. Must act quickly!


US President Donald Trump in a tweet said: "So horrible to watch the massive fire at Notre Dame Cathedral in Paris. Perhaps flying water tankers could be used to put it out. Must act quickly!"

Hundreds of people gathered on the bridges of Paris downriver to witness the scene, many filming the images with their smartphones. The cathedral was located at the centre of the French capital in the Middle Ages and its construction was completed in the mid-12th century after some 200 years of work.

During the French Revolution in the 18th century, the cathedral was vandalised duing widespread anti-Catholic violence: its spire was dismantled, its treasures plundered and its large statues at the grand entrance doors destroyed.

It would go on to feature as a central character in a Victor Hugo novel published in 1831, "The Hunchback of Notre Dame" and shortly afterwards a restoration project lasting two decades got underway, led by architect Eugene Viollet-le-Duc.

It would survive the devastation of two world conflicts in the 20th century and famously rang its bells on August 24, 1944, the day of the Liberation of Paris from German occupation at the end of the WWII.

"Paris is disfigured. The city will never be like it was before," said Philippe, a communications worker in his mid-30s, who had biked over to the scene after being alerted of the fire by a friend.