Experts call for digital transactions to f...
Next Story

Funds geared towards YLP and Uganda Women Entrepreneurship Programme(UWEP), shall be transferred from the ministry of finance direct to bank accounts of respective community groups.

Funds geared towards YLP and Uganda Women Entrepreneurship Programme(UWEP), shall be transferred from the ministry of finance direct to bank accounts of respective community groups.

Besides the national-wide poor performance of funds disbursed under the Youth-livelihood programme(YLP), the government remains committed to sponsoring the same.

According to Janat Mukwaya, the cabinet Minister for Gender, Labour and Social Development, even though YLP faced enormous challenges towards the start, which saw fewer returns, more funds are to be injected in the same programme.

"Over sh100bn has been injected in the YLP since inception, but we cannot halt the funds just because some groups have failed to return the money as expected.

We have learnt some lessons about what went wrong, and are therefore willing to rectify such short-comings as we continue with the programme," remarked Mukwaya, during her two-day tour of different youths and women groups in areas of Entebbe municipality and Katabi town council, Wakiso district.

The minister added that funds geared towards YLP and Uganda Women Entrepreneurship Programme(UWEP), shall be transferred from the ministry of finance direct to bank accounts of respective community groups.

This, according to the minister, shall help in curbing the bureaucracy involved in receiving such funds, as they go through the local government system.

She, however, maintains that chief administrative officers, town clerks, community development officers among other technical officers, shall remain mandated to the supervision of projects implemented under such programmes.

Bosco Ssebbaale, a youth leader of Bunonko-Kigungu poultry youth livelihood group in Entebbe municipality, applauded the move, saying some technocrats at the municipal council, have been asking for transport refund whenever they go to supervise youth projects.

Jane Rose Karuhanga, the chairperson of Neighbours' group which deals in mushroom growing, urged the minister to draft a policy which allows a smaller number of people in a single group, away from the fifteen people as recommended in the current policy under YLP and UWEP. All the groups inspected, asked for more funding for their activities.

However, one of the technocrats at Entebbe municipal council expressed concerns over the hardships they're likely to face during recovery of such funds.

"If we have been battling with these groups when funds are passing through our offices before they're disbursed to them, what will happen when such funds are remitted directly to their accounts," inquired an official. 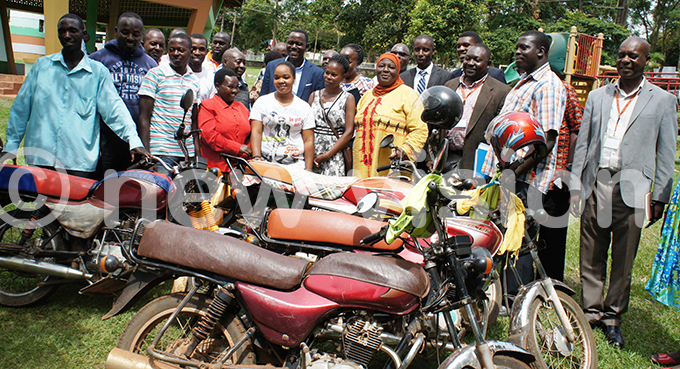 One of the youth groups exhibiting the boda-boda motorcycles it bought with the YLP funds. Photo by Julius Luwemba.

Minister Mukwaya said all youths and women groups shall be required to make work-plans which shall be presented to town clerks and community development officers for approval before withdrawing money intended for implementing any project.

Charles Magumba, the Entebbe municipality town clerk, noted that most groups are comprised of illiterate members who lack knowledge of the processes to be followed in order to access YLP or UWEP funds.

Similar concerns were echoed by Paddy Kakumba the town clerk for Katabi town council, expressing concerns of being misrepresented to the community groups due to their lack of information and knowledge of how local government systems work.

Over sh147m was given to eighteen groups in the financial year 2017/2018 while more 17 groups await for funding this financial year 2019/2020. This brings it to a total tune of sh250.9m that has so far been disbursed to 32 community groups in Entebbe municipality, out of which, only sh47m has been recovered.