Child friendly spaces, a safe haven for re...
Next Story

According to the residents, the bridge broke a year ago and since then, it has not been repaired.

The broken bridge has affected transport and business. (Photos by Andrew Masinde)

According to the residents, the bridge broke a year ago and since then, it has not been repaired.

YUMBE-Residents of Jure village, in Odravu sub county in Yumbe district have urged Uganda National Roads Authority (UNRA) to work on Jure Bridge as fast as possible as it has paralysed  transport and business in the area.
According to the residents, the bridge broke a year ago and since then, it has not been repaired.
The bridge was constructed in 1943 by the East African Tobacco Company Limited using timber on the surface and some metallic frames that have since broken down making it weak and impassable.
All the metallic and wooden guards have collapsed while the remaining few are just dangling. Sajid Adrama a frequent user of the bridge says that the bridge has become a death trap.
He notes that many who don't know that the bridge is broken end up getting trapped in the middle of the bridge while others are forced to drive back to Arua or Yumbe and then pass via Koboko.
According to Saidi Aniku, the LC5 vice chairperson Yumbe district  the road had become a death trap as it was on the verge of collapsing that is why the bridge was closed off. 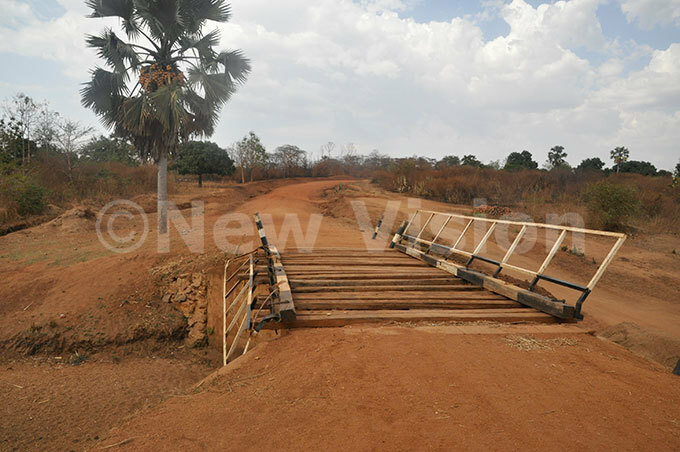 He says that because of the sorry state the bridge is in, business has been affected. Transport has also doubled. "The route connects Arua, Terego, Yumbe, Moyo up to South Sudan, so if it's not worked on, many people who use this route will continue to suffer. Even the business will stall," he noted.
Aniku added that if the bridge is not worked on urgently, it will continue to put the lives of the users in danger. For safety, most people now use the longer routes.
One of the businessmen who used to use the bridge says  he now has to use the longer route through Koboko, Maracha to Nebbi yet before he would just cross from Yumbe via Arua then to Nebbi.
"It is stressing because even the fuel we use is a lot. How I wish government comes up and builds the bridge as fast as possible to save our business, especially us who deal in perishable goods," he notes.
According to Aniku, besides Jure bridge, there other bridges that need urgent construction and they include; Kochi Bridge on Arua-Yumbe road, Ora 1 Bridge linking Arua to Rhino Camp-Pakwach among others.
"They were made of wooden deckers in the 40s and 60s hence to date they are all rotten putting the lives of users in danger. Government should construct new bridges," he notes.
Aniku also requested humanitarian agencies to give a hand if government is delaying because most of their trucks and small vehicles travelling in the refugee settlements in Yumbe, Moyo and Arua use the road.
Mark Sali, the communications director,Uganda National Roads Authority says that it is true the bridge broke down and UNRA already did a site visit and already the contractor is working on the design and after the construction will commence in four months.
According to Sali, the construction will be under taken by China Henan International Cooperation Group (CHICO)
Sali said that besides the bridge, government is also going to tarmac the road from Yumbe to Odupi refugee camp under Japan International Cooperation Agency (JICA)
In 2006, Parliament approved a proposal by government to borrow $7m from the Arab Bank for Economic Development in Africa to construct 21 bridges in West Nile. The project, is implemented under the Ministry of Works, constitutes funding of the first phase in the construction of 66 bridges.